Purchasing new undies can be a huge confidence booster.

And if you’re looking for something that will really make a statement, it’s worth checking out Agent Provocateur.

The luxury brand often causes a stir with its out-there lingerie items.

So would you be brave enough to try the store’s sexiest design yet?

On Instagram, Agent Provocateur showcased one of its “naughtiest” items of the year.

Its Judy Playsuit is enough to make anyone blush due to its barely-there nature.

While all-in-ones tend to cover up the body, it leaves nothing to the imagination.

It’s essentially made up of a string of black straps, which seductively criss-cross over the body.

On the website, the model wears the look with nipple pasties, which are in place to protect her modesty.

The back of the garment is equally as revealing as the front.

As the playsuit is a halter style, it leaves your back completely exposed.

The bottom half, a kinky thong, is slightly less minimalistic.

Sadly, the garment is likely to be too expensive for many to purchase.

The playsuit retails at an eye-watering £295, although this is likely to be because of the luxury materials used to make it.

Each elastic strap is encrusted with iridescent crystals that make them glimmer.

Large rose gold rings also lie at each hip, adding another touch of sparkle to the glamorous look.

The price-tag hasn’t been enough to put off all shoppers, as the Judy Playsuit has received a very positive response on Instagram.

Over the last week, promotional pictures have racked up 11,800 likes and dozens of comments.

Many gushed over the look, with commenters remarking it was unlike any lingerie they’d seen before.

Another said: “Don’t think the world is ready for this look.” 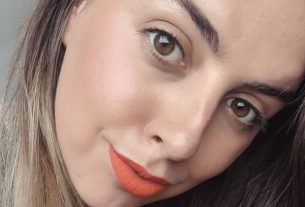