Just days after the anniversary of the Manchester Bombings and Ari’s tiny bee tribute behind her ear, the One Last Time singer proves that she is ready to get back in the limelight.

In the clip, Ariana was singing along to an unheard single which appears to be featuring American rap artist Nicki Minaj.

The snippet received 50,000 retweets and 182k likes at the time of publication, with floods of comments supporting the collaboration.

The song is reportedly called The Light Is Coming ft. Nicki Minaj.

SIDE TO SIDE: The dynamic duo paired up for Side To Side at the MTV awards

ONELOVE: Ariana Grande had a bee inked behind her ear as a tribute for Manchester

“I didn’t expect it to be THIS upbeat”

Lyrics for the new single features a verse from Nicki saying: “Why do you have to make me go call up my side guy?

With Ari finishing saying: “The light is coming to give back everything the darkness stole.”

Surprised fans commented on the snippet saying: “I didn’t expect it to be THIS upbeat, looking at the lyrics, it sounded more of a slow song, but it’s upbeat. I’m so amazed.”

With another following up with: “This is so different to what I thought but it’s a bop!”

SWEETENER: Ariana is bringing out a new album in 2018, Sweetener, Nicki Minaj will feature

Comments on both videos, the original and the retweet, came flooding in from fans begging for an early release and praising the clip of the heavily anticipated new song.

Ariana and Nicki have featured together before on Ariana’s track Side to Side in 2016.

STOLE THE SHOW: Nicki and Ari make a jaw-dropping performance during a live performance

MET GALA: Nicki Minaj is recording with Ariana for her new track

Since posting the clip, Ariana hasn’t said anymore about the upcoming track and the release date is still unknown.

The Light Is Coming will be featured on Ariana’s album, Sweetener, which also featured Manchester Bombing tribute, No Tears Left To Cry.

Although having no release date for the album yet, it will be released this year.

The Dangerous Woman singer is rumoured to be dating Pete Davidson after she called time on her ‘toxic’ relationship with Mac Miller. 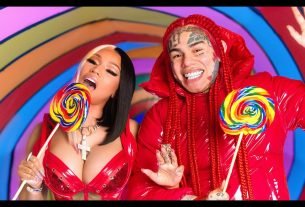 6ix9ine and Nicki Minaj Team Up on ‘TROLLZ’