The pop beauty, who was rocked by the Manchester Arena bombing at her concert last year, took to Instagram to show off her God Is A Woman single cover.

Wearing nothing but body paint, the newly-engaged superstar oozes sex appeal and glamour as she poses up a storm.

With her hand up above her head, Ariana appears to be protruding from a lake of blue paint.

Pushing her chest out into view, the One Last Time hitmaker left almost nothing to the imagination.

SUPERSTAR: Ariana Grande is about to release her fourth album

Accentuating her trim frame, Ariana was covered in streaks of white, blue and purple paint.

Cheekily, the brunette gal appeared to have painted her nipple lilac.

Simply captioning the shot with the title of the track, Ariana let the picture do the talking.

And talk it did.

Within minutes, the post was flooded with messages of adoration and fans going into meltdown.

One follower replied: “This is so beautiful.”

“OMG wow I don’t even have words,” a second continued.

TRIUMPHANT: Ariana celebrates her sexuality in the vid

TEASE: Ariana Grande is known for her provocative outfits

Ariana is just days away from releasing her fourth studio album.

Sweetener is slated to drop on July 20 and is reported to be packed with collaborations.

As well as confirmed tracks with Nicki Minaj and Pharrell Williams, the album is reported to have a song featuring the queen of pop herself, Madonna. 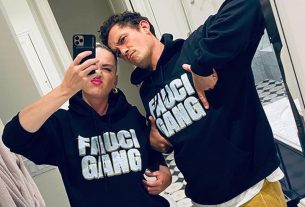