It’s been teased that not all of the heroes from the Marvel Cinematic Universe will survive, and many believe that both Captain America and Iron Man could be on the chopping block.

Iron Man is a fan favourite and the trailers have been dropping heavy hints that the character could meet his end.

Now, Tony Stark himself has spoken about the possibility of his beloved character losing his life.

Speaking to the Toronto Sun, Downey Jr revealed that Infinity War is not just a climax for all Marvel movies, but a new beginning being set for new characters.

He said: “There’s been a quantum shift in the way that things are going now where all these different franchises are on the horizon.

“And they’re bringing new energy and some of us are maybe tapping out or going away for who knows [how long] in the future.”

The movie’s writers Christopher Markus and Stephen McFeely also joined in, adding: “We didn’t want to cut off a flower just as it’s beginning to bloom. But a nice big flower? Maybe.”

Of course, the biggest flower of them all is Iron Man, who started the entire Marvel movie universe.

MAD TITAN: Thanos is coming for all six Infinity Stones

“his is a heads-will-roll scenario”

Iron Man sees himself as the father and leader of the Avengers, and so many feel it may be fitting that he makes the ultimate sacrifice to save his team.

The character nearly died at the end of the first Avengers, and many think that Stark’s death would make a fitting end.

Downey Jr said: “The threat has risen to a new level, which is really saying something.

“Whether we want to band together or not, we don’t survive unless we do.

“Thanos means, put whatever terrible thing you want to say [away], because nobody gets past him.”

HEADS WILL ROLE: The crossover movie event will be like no other

He also told Entertainment Weekly: “I could project all kinds of stuff. I could get into the black dog. Whatever you want. Or I could stay, spiking it in the end zone until I have to be carried off. I’m looking forward to whatever resolution is in the cards.”

The actor also stressed the importance of just how dangerous Thanos is, adding: “Believe me, I’m tired of every movie, you know, ‘It’s the end! It’s Armageddon! It’s the Be All, End All, Forever!’ And then it’s… not.

“This one actually is. They’re not kidding. This is a heads-will-roll scenario.”

Chris Pratt Carries A Keg In Swim Trunks in Hawaii 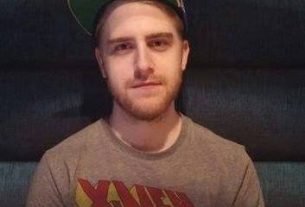 Why The Original Justice League Made Wonder Woman Their Secretary