[Warning: The below contains MAJOR spoilers for the series premiere of Big Sky.]

Never trust a state trooper who compares getting a car unstuck from mud to making love? That may be the lesson to be learned in the premiere of Big Sky, ABC’s new thriller from David E. Kelley.

Two sisters, Danielle (Natalie Alyn Lind) and Grace (Jade Pettyjohn), go missing on their way to visit the former’s boyfriend, Justin (Gage Marsh), when a chance encounter on the road with a trucker, Ronald (Brian Geraghty), infuriates him. Their car stalls on the side of the road, he almost hits them, then Danielle insists on chasing after him and insulting him … all after he’s heard from his mother about how he needs to aspire to do something more with his life. He follows them and, though they try to fight back, they’re no match for his taser.

But when he throws them in the back of his truck, they realize he’s taken someone else: Jerrie (Jesse James Keitel), whom he’d picked up at a truck stop earlier. Good news: Jerrie, despite being wrapped in plastic, is alive. Bad news: the three fail to escape, even though Jerrie does put a comb in Ronald’s neck during an attempt to do so.

Meanwhile, the investigators who will soon be involved in the case, ex-cop Jenny Hoyt (Katheryn Winnick) and private investigators, Cassie Dewell (Kylie Bunbury) and Cody Hoyt (Ryan Phillippe), are involved in a messy love triangle. Jenny and Cody are separated, which “does not mean over,” the former points out when she confronts Cassie about sleeping with her ex. (Cassie doesn’t help herself when she reminds Jenny that she’d said she wanted Cody to meet someone. She obviously didn’t mean the other woman.) When Cassie tries to talk to Jenny later on at a bar, the two end up in Urgent Care to treat the wounds from the fight.

After, Jenny heads to Cody’s cabin to find out if they are truly working on their relationship as they’d apparently said they would. “We tried this, Jenny,” he reminds her.  “We just end up wanting to kill each other.” However true that may be, that doesn’t stop them from falling into bed. But there’s no time to talk about what that may mean (“that was really nice,” from Jenny, is the extent of it) because their son, Justin, calls: Danielle and her sister never showed.

While Cassie and Jenny look into potential leads from the PI’s office (there are rumors of a cult within the church and prostitutes have been going missing from truck stops), Cody hits the road and meets up with a state trooper, Rick Legarski (John Carroll Lynch), who informs him these girls aren’t the first to go missing in the area.

At an out-of-the-way shop that closed down after the pandemic (which is only vaguely mentioned a couple times, and no one’s wearing masks), Cody meets with Rick, who’s heard that he can be a renegade and was fired from three different departments. It’s in the past, Cody insists. He’s heard about long-haul truckers who are mixed up in sex trafficking, he notes, and some may be members of that church, so he wants to drive up there. When Cassie calls to check in, Cody tells her he is heading to the church with Rick and will call when he knows more.

But once the two men get into Cody’s vehicle, Rick shoots him in the head! Yes, Big Sky just killed off Phillippe’s character in the first episode. But there’s more — Rick then gets out of the car and calls Ronald: “You’ve been sloppy.”

It’s surprising, but exactly how surprising? There is, after all, something strange is pretty much all Rick’s scenes in the premiere. First, there’s the way he guides a tourist whose car is stuck in the mud. Does his wife “like you to hop in the hay and just gun it? Or maybe take it nice and slow?” the state trooper asks before explaining, “I want you to make love to that fine Montana soil. …. Slow foot. Just ease your way.”

Then, when he arrives home and dinner has been kept warm, he calls the woman who has done so for him “mother,” only she turns out to be his wife, Merilee (Brooke Smith). “I don’t like it when you call me mother,” she reminds him. “I’m your wife.” Furthermore, “you need to touch me more, like a husband touches a wife,” she adds.

What did you think of the premiere and that big twist to end it? Vote in the polls below.

Antonio Sabato Jr. is Officially Divorced, He Gets House and Car 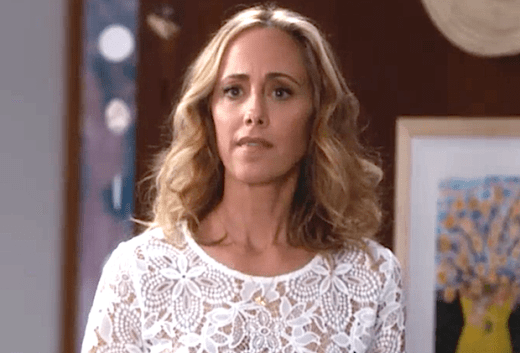