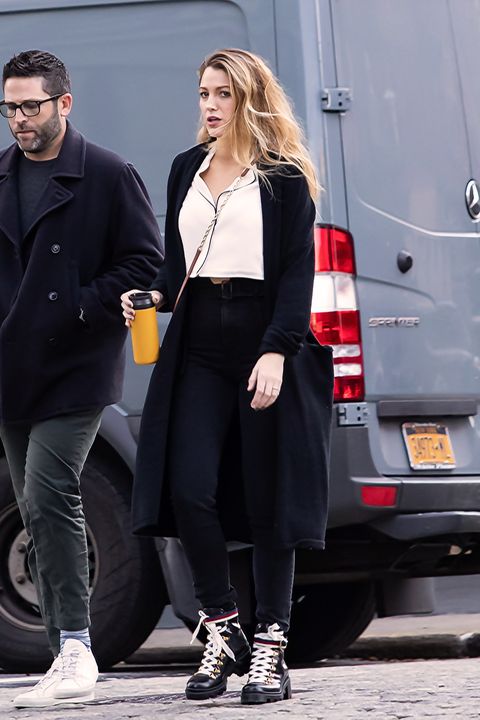 On Thursday, Blake Lively walked through New York City streets in casual fashion that fit in perfectly. She wore a long black coat over a white crop top with blue piping that she’s worn before on an outing with husband Ryan Reynolds. Her skinny black jeans were tucked into black combat boots with white laces.

Slung over her shoulder was a brown leather phone case, and she carried a yellow water bottle as she walked down the street with a male friend.

Lively just released her directorial debut for her friend Taylor Swift’s music video bringing to life the song “I Bet You Think About Me.” Swift has been re-recording several of her albums as a way to take back her music from manager Scooter Braun, who refused to sell Swift her original catalogue. The song is off of Red (Taylor’s Version), and the video featured actor Miles Teller and his actual wife Keleigh, playing a groom and bride who have their wedding ruined by the memory of Taylor Swift, the groom’s ex.

Leading up to the music video’s release, Lively peppered her Instagram with hints about it, first with an Instagram post where she’s wearing the ring Swift dons in the video:

And then she shared a clip from the video the night before it came out in which a hand wearing that same ring rips open a wedding cake to show the red material inside:

Lively and Swift have been close friends for many years, and Lively made an appearance with Reynolds at the Saturday Night Live after party when Swift was the musical guest. Unrelated to Swift, Blake Lively has a lot going on right now— she recently launched a new line of mocktail mixers called Betty Buzz.

“I don’t drink because I don’t like the effects of alcohol, but I like being a part of it,” she told reporters while promoting the brand. “I like being social. I like people coming together. I found that sometimes not drinking, the thing that was interesting was that it was a little alienating, because you don’t feel — and maybe it’s just in your own head — but you just don’t really feel a part of it.”

She’s hoping this new line gives the people in the room who don’t want to drink something delicious to enjoy.