The Love Island host shocked her 1.9 million followers on Caroline Flack’s Instagram by sharing a “vintage” photo of herself.

The 38-year-old – who is in an on/off relationship with Celebrity Big Brother star Andrew Brady – looked remarkably different as she posed for a makeup free selfie alongside Jack Osbourne.

Caroline appeared to ditch the slap for the pic, allowing her natural beauty to shine through.

She captioned the image: “Vintage. Don’t even know what year this is @jackosbourne.”

Caroline’s fans couldn’t believe how much she had changed – and some even speculated that she might have had surgical help.

“Caroline’s nose appears to be slimmer with a natural slope and less projection,” an expert at MYA Cosmetic Surgery exclusively revealed to Daily Star Online.

“This could indicate that she has undergone a surgical rhinoplasty procedure to achieve the feminine natural nose shape while still in-keeping with her facial features.

“Rhinoplasty procedures can range from £5,000 to £11,000 depending on the extent of the work that is required.

“I would speculate that Caroline has undergone non-surgical treatments such as anti-wrinkle injections – often referred to as Botox – to her forehead.

“This will create a smooth forehead and limit any frown/expression lines. It would typically cost around £150 to £350 per session and the effects of the treatments usually last three to nine months.

“It is also possible that Caroline has had fillers to her cheeks to help restore lost cheek volume, which can be lost in the natural age process.

CHANGES: Caroline’s fans couldn’t believe how much her face had changed over the years

LAID BARE: MYA Cosmetic Surgery believe Caroline might have had Botox, fillers and a nose job

“The price for dermal fillers depends on the area treated, as well as the amount of product used but can typically range from £150 to £500. The effects usually last 12 to 14 months or longer in some cases depending on the product.”

Comedian Matt Richardson called out Caroline for having had cosmetic procedures during an awkward episode of Love Island: Aftersun last month.

However, the TV presenter has previously said she had no problems with anyone going down the surgical route if it makes them feel more confident.

NO JUDGEMENTS: Caroline said she had no issues with surgery

“I don’t have any judgements,” she told Now back in June.

“You get your hair cut or whiten your teeth, so what’s the problem if it makes you feel confident?” 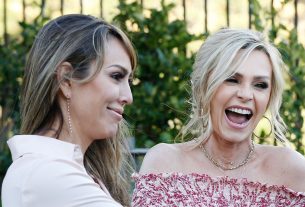