Paddy McGuinness’ wife – who has been married to the Take Me Out presenter since 2011 – donned a dress that covered her entire bod while showing it off at the same time.

But with so many celebrities in the room Christine had to go to drastic measures to get noticed.

The Loose Women regular amped up the skin factor by sporting an entirely see-through gown.

Christine looked phenomenal in the dress, which featured sheer fabric draped over her body that exposed her endless pins.

Aside from that, it looked like Christine was just wearing a pair of nude knickers, with her chest completely on show.

The Real Housewives of Cheshire star preserved her modesty with a silver pattern woven into the dress that managed to cover Christine’s assets.

CONFIDENT: Christine put her knickers on display in the gown (Pic: SPLASH NEWS)

Teaming her barely-there frock with metallic accessories, Christine oozed confidence and sex appeal as she walked into the Midland Hotel with a male friend.

The model completed her look with loose waves and a sultry smokey eye.

Christine had taken a well-deserved night off from caring for her three children – Felicity, two, and five-year-old twins Leo and Penelope.

TOGETHER: Christine, Paddy and their kids have started filming a new reality series (Pic: GETTY)

Christine’s twins are both autistic, while she suspects her youngest child is too, but she’s too young to be diagnosed.

Christine, Paddy and their three children have reportedly started filming a new three-part reality series, which will focus on her kids’ condition.

The Blackpool-native is thought to have impressed ITV2 bosses with her appearances on The Real Housewives of Cheshire. 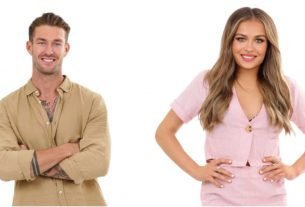