TIMES UP: Clean Bandit feel the presence of women is not lacking in festival line-ups

With the emerge of the #TIMESUP campaign, more and more women have been speaking out about being unfairly treated in the entertainment industry.

Clean Bandit star Grace Chatto is one of few artists that hasn’t spotted an issue with festival line ups this year.

Speaking exclusively to Daily Star Online, Grace, alongside her male counterparts that make Clean Bandit, admitted: “I don’t think that women are really lacking in the festival area, we’ve never experienced any trouble with it.

“I think women are dominating the music industry at the minute. We’ve worked with some amazing voices and women are doing so well.”

Speaking about the #TIMESUP campaign, the star explained how in her own circumstances, the trio haven’t experienced any kind of negativity towards their music because there’s a woman in the group.

“I think women are dominating the music industry at the minute. We’ve worked with some amazing voices and women are doing so well.”

One of the many powerful voices that Clean Bandit have made music with is pop sensation Demi Lovato, who surprised her fans by making a cameo at Capital’s Summertime Ball with Vodafone.

Having supported the #TIMESUP campaign, US singer songwriter Halsey spoke out about the unfairness of women at festivals and lack thereof.

The Now Or Never singer responded to the Firefly Festival announcement with: “Damn guys come onnnnnn. Where the women at.

“This was one of my favorite festivals I’ve ever played and it’s a shame there’s not more females on the bill. With the exception of (the amazing) Sza, the first like 20 acts on the bill are men. It’s 2018, do better!!!”

Halsey played for Reading and Leeds festival last year on the NME stage but isn’t set to make a return to the British festival for 2018.

After the release of the Wireless festival lineup, a creative festival lineup was released that featured nothing but women, numerous fans piled in with responses about how excited they would be for that lineup.

Featuring female leading names such as Halsey, Dua Lipa and Paramore, the fake lineup was favoured by over 2,000 users.

Taking to Twitter to share her distaste of the male-dominating festival lineups, @abigailffirth tweeted: “Still thinking about that wireless lineup nonsense. mad that we have this conversation every. year. here’s a not impossible lineup with all women.”

still thinking about that wireless lineup nonsense. mad that we have this conversation every. year. here's a not impossible lineup with all women (I did r+l too for when they inevitably have 2 women on stage all weekend) pic.twitter.com/4ISaoLeyC5

Floods of comments followed the fake release saying: “I would actually go if this was the real lineup.”

Capital’s Summertime Ball with Vodafone surprised their 80,000 guests with a number of surprise female artists hitting the stage including Louisa Johnson and Demi Lovato. 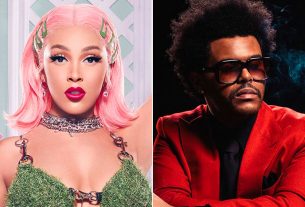 Doja Cat Hints at Collaboration with The Weeknd