Back in April of this year the former EastEnders star Danniella Westbrook revealed that her bones were rotting away after years of drug abuse and botched surgery.

Speaking to Mirror Online, the 45-year-old said that some mornings she wakes up in great pain as her bones are decaying and other days her left side is completely sunken in.

Opening up, the brunette said: “They need to take a piece of my bones out of my skull and put a plate into my face, but they’ve got nothing to stick the plate onto at the minute because the bone’s not strong enough.”

Last month she was forced to go under the knife as the corrective procedure commenced, with surgeons working to replace her facial bones.

Opening up on Twitter about her first stab at the surgery, Danniella shared: “Feeling wiped out after this morning, face swollen but at last the process has started. Not looking forward to the bone replacement but I’m on the right road. Thanks for all your messages.”

After admitting to Mirror Online in the original interview that: “I just don’t look like myself anymore”, Danniella stepped out last night to proudly show off her new look.

Arriving on the red carpet for the Essex TV Awards, the mother-of-two could’t have looked happier as she smiled at the press.

Looking like she had found a new lease of life after surgery, the Walthamstow-born star looked sophisticated in a stylish black suit and roll neck.

Completing her look, she teamed her ensemble with standout black heels and a cream handbag.

PROUD: Danniella Westbrook even took to the stage to present an award (Pic: SPLASH NEWS)

RECONSTRUCTION: Danniella Westbrook was forced to undergo the surgery after her face crumbled (Pic: SPLASH NEWS)

Making the most of her reconstructed face, Ms Westbrook kept her make-up complementary with a flash of mascara and pretty pink lips.

Excited to be out in the limelight again, the former I’m A Celeb contestant even took to the stage to present an award. 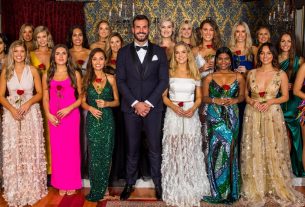