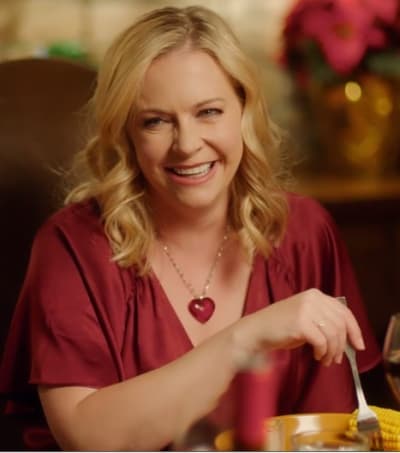 Don’t you adore it when you return home for the holidays and find love?

Well, I can’t relate, but I do love it when fictional couples do that exact thing, which is the case with Natalie on Dear Christmas.

Their love was hard to classify. Was it love at first sight, or was the theme supposed to be that love took time? Technically, they fit the bill either way.

Natalie was a podcaster who discussed true love all of the time, despite never having experienced it herself. It had to suck for her watching endless footage and listening to others tell their stories when she hadn’t experienced anything similar.

On top of that, her parents were the perfect couple, still happily married decades later after meeting in, was it high school?

And her younger sister had not only found her true love, but she was starting a family with him too. Emma was adorably pregnant at the start of the movie, and all she could talk about was Billy getting home before the baby arrived, and of course, Natalie’s love life. 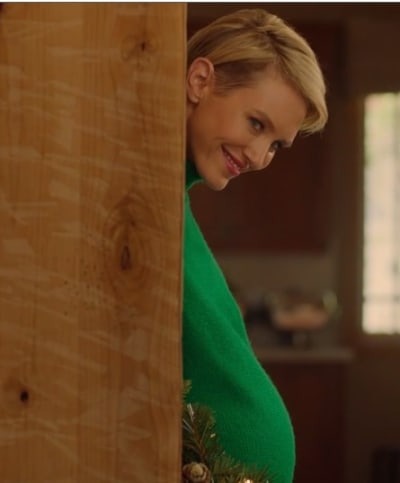 She was wonderfully meddlesome in that way little sisters can be, and it was cute that Natalie had her encouragement as she worked through whatever it was she was feeling for Chris.

In a way, it was love or at least lust at first sight for Natalie. Chris, or Mr. Christmas, was the man who showed up to change her flat tire for her and send her on her merry way home.

You have to admit if a handsome guy wearing flannel shows up pleasant and helpful as can be and changes your tire for you while you warm up in his festive tow-truck with a hot chocolate station WITH MARSHMALLOWS, then there will be some fluttering in the nether bits, I mean, the heart.

Chris is easygoing and self-assured, and Natalie responded well to the positive energy he puts into the universe. 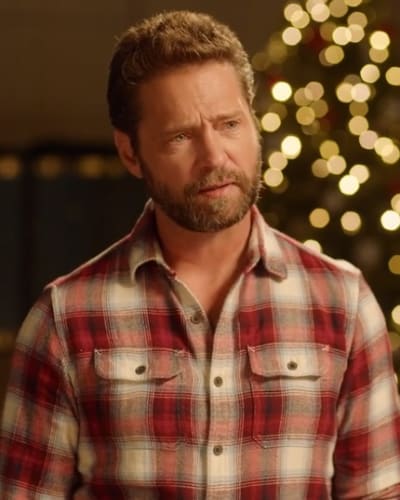 But Chris isn’t just any guy. He’s someone from Natalie’s past, and it’s quite amusing as Natalie tries to figure out why he looks so familiar and which guy from band camp he is.

Initially, it’s enough to make you wonder if Chris will give her a hard time or even harbor a bit of a grudge that she didn’t pay him the time of day in 8th Grade, but Chris is good people, so he doesn’t do that once.

Instead, Chris is the guy who always shows up, and it becomes a running theme throughout the movie as she never knows when she’ll run into him next, but she always does. 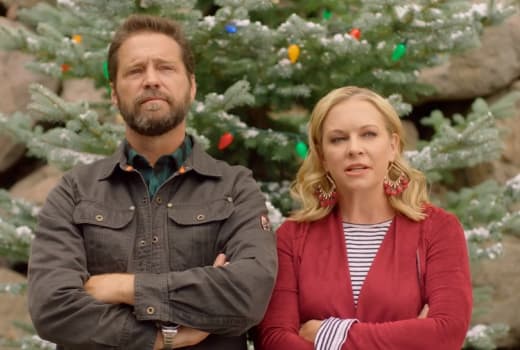 Chris is a jack of all trades, and the man has so many jobs and activities he partakes in that you lose count. No matter where Natalie goes, running into him is destiny.

Hell, even she brings up that fancy phrase about fate. The downside to the movie is that they relied heavily on this repeated gimmick, if you will, to build up the relationship and true love blossoming between Natalie and Chris.

While there was nothing wrong with Melissa Joan Hart and Jason Priestley’s interactions at all, and they looked good together, it was still difficult to buy into their supposed love.

It barely seemed as if they talked about much outside of their mutual travel experiences when they were at the pub together. 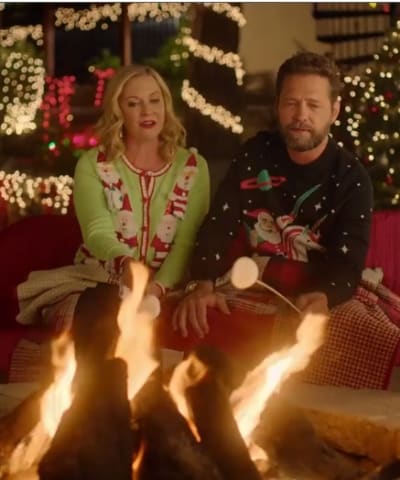 When it came to the movie actually building the romance between them, it all felt cursory at best.

With Christmas romances, you already know where the movie is headed and suspect how it’ll end, so it’s all about the journey to their happy ending.

We knew Natalie and Chris would fall in love by the end of the film, but the journey to that point was shockingly lackluster. It’s a shame, too, since it’s always refreshing when the romantic leads aren’t a couple of twenty-something-year-old disaster adults all the time.

Chris goes from the nice guy who Natalie expresses some attraction to, but felt as though it was a casual, burgeoning friendship, to her true love, and I don’t see how we got to that point. 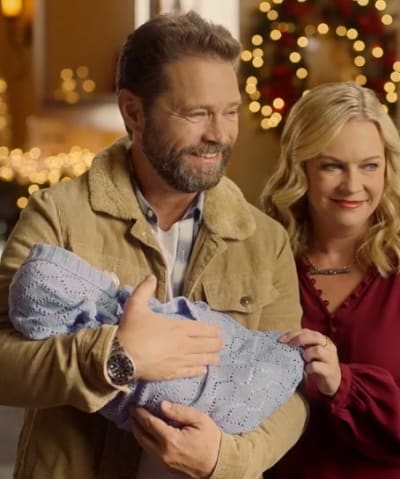 Their dance at the Firefighter’s Ball was sweet, but it was a perfect moment of romance-building that they pull away from less than a minute after it starts. Then, there’s a reference to it, later on, that implies it was significant for both of them, but we wouldn’t know; we didn’t see it.

Even their mutual “you look great” as they both see each other dressed to the nines feels like something two friends would say to each other to be polite rather than two individuals falling head over heels for each other.

Natalie, bless her heart, is ill-equipped to deal with a burgeoning romance. I mean, it could be because she didn’t realize that’s what they were supposed to be either, but no, all joking aside, she doesn’t have the experience in the romance department to figure out if they’re moving too fast or not. 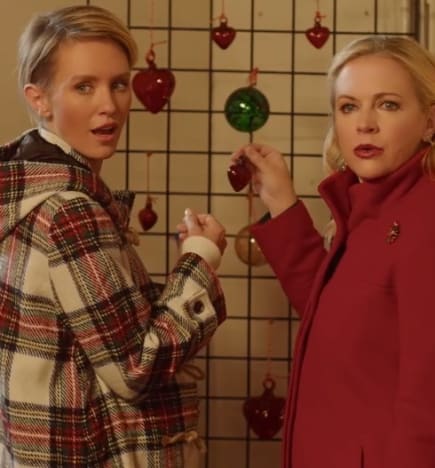 You can appreciate her trying to take a more logical, rational approach to everything, but it results in her pushing Chris away when he’s simply enjoying their vibe and what they have going on.

It isn’t fair to him, and she was speaking from a place of fear and trying to compare what she has with Chris to the multiple accounts of lovebirds in her podcast or her parents and sister.

Comparison is a thief of joy.

Natalie’s real reassurance that she isn’t moving too fast is finding her 8th-grade diary and discovering that she had feelings for Chris way back then.

Chris’ love for her isn’t fast at all since he had feelings for her when they were kids, and she realizes the same, but only after her father finds her diary.

Does it change anything at all, really?

Isn’t true love more about the feeling and the person then it is the timeframe it happens, speed, and all of that?

Natalie’s love confession on her podcast is cute, and Chris is so touched by it that he shows up at her parents’ house with a glass unicorn ornament. 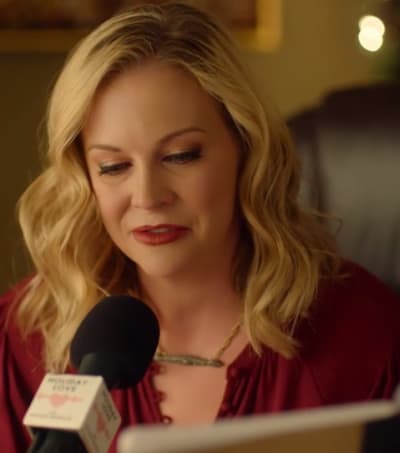 Is glass-blowing the thematic task this holiday season for Lifetime films? We got some pretty awesome glass-blowing during The Christmas Edition too, and an appreciation for ornaments during Christmas on the Vine.

The glass-blowing sequence is one of the best moments of the movie. I love that they show the whole process of it, and Natalie and Chris were having a great time together.

I also love that it consisted of making heart ornaments. Did you catch all of the hearts popping up throughout the film and even the reference to them?

It was such a cute thing considering the movie stars Melissa Joan Hart and was part of her and her mother’s Hartbreak Productions. 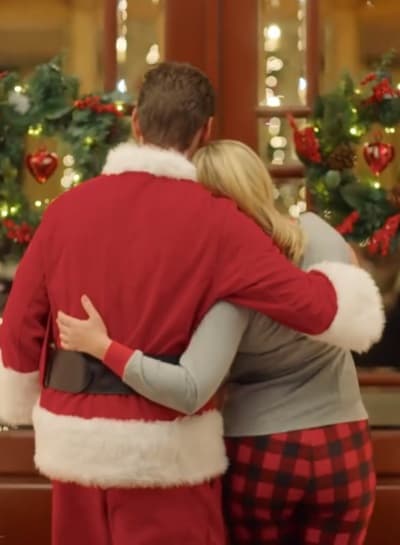 I do suppose kudos are in order for this film since much of the filming had to abide by COVID restrictions. Perhaps that impacted the overall movie and contributed to why a few things felt so off about it.

It lacked larger group scenes and the town Christmas vibe you’d come to expect. All the raging parties happened offscreen, and there was a limit on characters.

But also, they made due, and it’s commendable. It had to be quite the task.

Over to you, Lifetime Fanatics. Did you love this one? Sound of below!

Love Island Jack reveals why he nearly QUIT show: 'I thought, I can't do this'