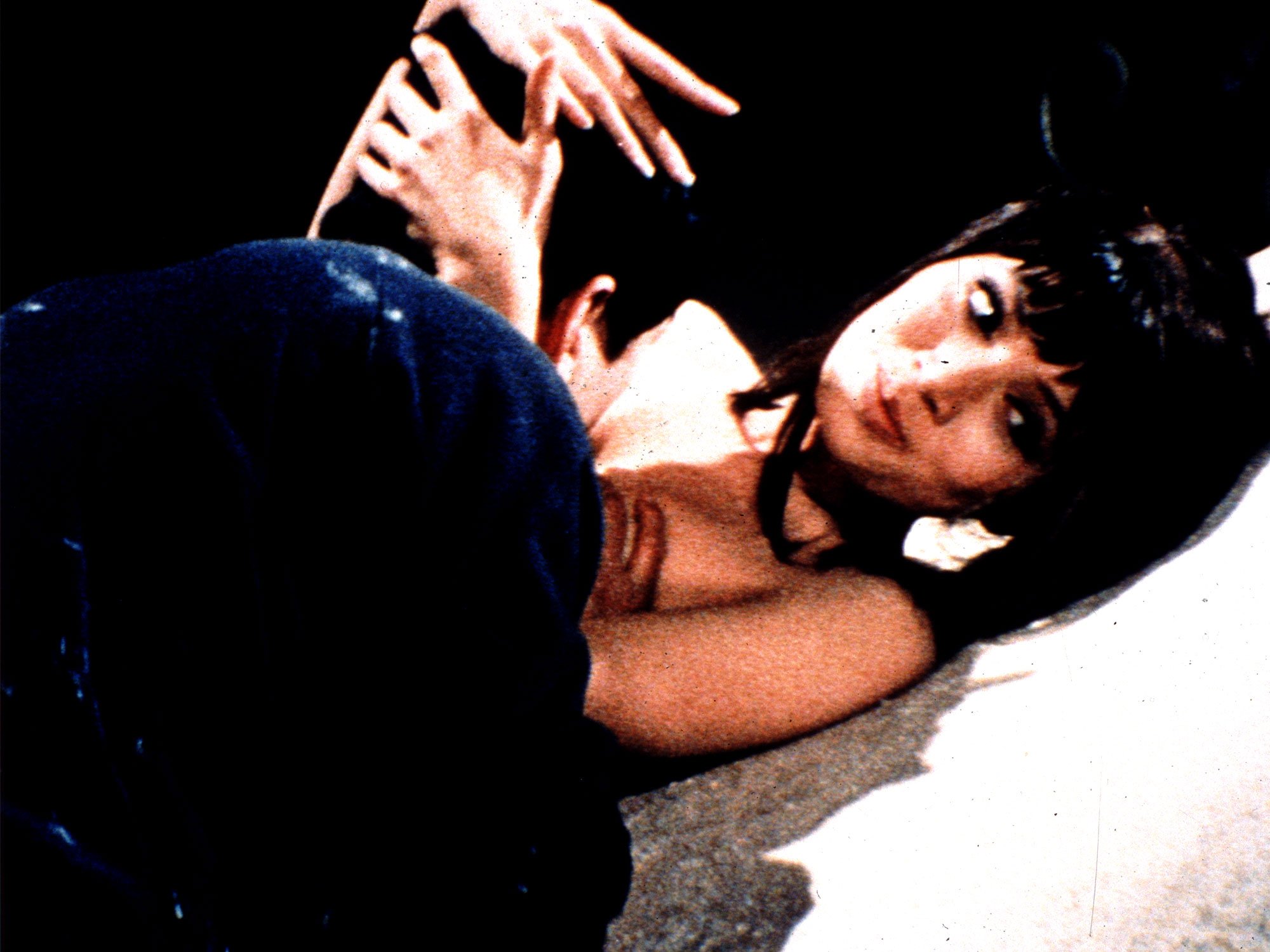 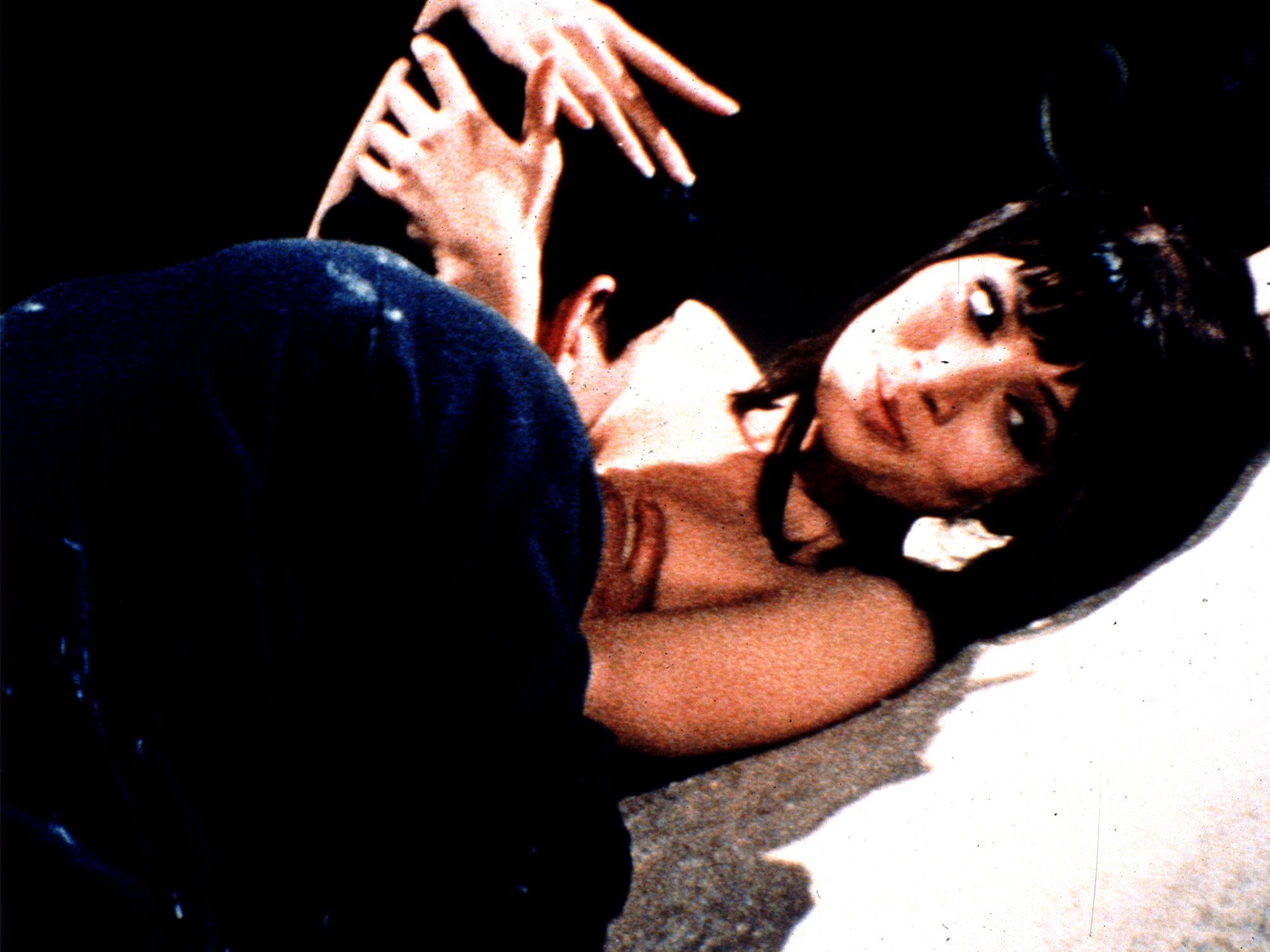 “My name is Aki Shima,” Aki (Mako Midori) says in voiceover at the beginning of Blind Beast. “I was never very popular as a fashion model.” This narration is accompanied by black-and-white images of Aki taken by the photographer Mr Yamana for an exhibition that “created quite a sensation.” It is not hard to see why.

In these photographs Aki is both nude and bound in chains, and in some her likeness is multiplied, creating a ’60s psychedelic pop-art pastiche that exposes her body while simultaneously confounding her identity and occluding her interiority. All this prefigures themes that will dominate the rest of the feature, as another artist reduces Aki to mere flesh, subjects her to different kinds of bondage, and ultimately cuts her up into her constituent parts. Even the monochrome presentation of these photographic stills, in a film that will otherwise turn out to be shot in colour, slyly introduces the key theme of restricted sensation.

Coming into the gallery early for a meeting, Aki spots a solitary man passing his hands slowly over a sculpture of her naked body. She has the odd, synaesthetic experience of feeling as though his hands are actually on her. Later, exhausted from a long day’s modelling, she calls for a local masseur to come give her a soothing back rub in her apartment (“I like it hard, ” she instructs him, “if it doesn’t hurt, it doesn’t satisfy me”), and as she realises that this blind man, Michio (Eiji Funakoshi), is the same person she had seen in the gallery, he chloroforms her, and with help from his mother (Norika Sengoku), moves Aki to his secluded, private warehouse.

Aki wakes in darkness; it is a way of acclimatising her – and the viewer – to Michio’s world of blindness. Michio appears with a torch, clearly for Aki’s benefit rather than his own, and as she tries to evade him around this large studio space, he illuminates the different sections of wall that she passes, decorated with outsized sculptures respectively of eyes, noses, ears, lips, arms, legs and breasts, while in the room’s centre are two gigantic full-body statues, one supine, the other prone.

Michio is an artist, his chosen form the female body. And this unworldly, somewhat naïve momma’s boy intends for Aki to serve as the model for his masterwork, whether she likes it or not. The decor of Michio’s studio – all disembodied parts – recalls the parable of the blind men and an elephant. Sightless from birth, Michio, whose experience of the feminine is confined to his live-in mother, reduces women to their physical form, deconstructed into separate appendages and blown up as palpable decorations to fuel his fantasies and desires.

Michio claims that his work with Aki will “create a totally new genre of art”. One suspects that this is an aspiration which director Yasuzo Masumura shares. Having already explored sex and desire in films like Manji, Irezumi and The Red Angel, Masumura turned to the ero guro nansensu of Edogawa Rampo’s writings for Blind Beast (in the same year that Masumura’s compatriot Teruo Ishii used Rampo for his Horrors of Malformed Men). Working from a Rampo adaptation by his screenwriter Ishio Shirasaka, Masumura strips sex and sexual relations back to their corporeal basics, while finding ways to express desire’s elusiveness and exclusiveness.

“I want to pioneer the art of touching, where only the blind can appreciate it,” Michio tells Aki. “A new artform by and for the blind.” Masumura too foregrounds tactile sensations, via a medium which ordinarily privileges sight and sound, and precludes actual touch. Masumura’s strategy for realising a haptic cinema are to have characters constantly narrating the experience of groping, palpating and probing, or playing out their dramas on and around sculptures of bodies and body parts.

As Aki gradually loses her own sight – along with her wish to escape – in this dark, hermetic environment, Masumura introduces a tunnel vision effect, placing the lovers’ intimate embraces against a background that becomes ever more shadowy and unclear, so that practically all we see is the close contact of flesh on flesh, removed from any broader context. The artist’s (and filmmaker’s) studio becomes a mythic, psychological space.

Anticipating the obsessive, deviant amour fou of Nagisa Oshima’s scandalous In the Realm of the Senses, Blind Beast is a reflexive film about art- (and love-) making. Its irrational story ends as it begins – with a woman dismembered and abridged to her sexualised image, as both art and pieces of art, even as her narrating voice remains to mark her as a flesh-and-blood individual and to remind us that all along she has been controlling this narrative of her own captivity.

Aki is like the Venus de Milo, turned into an object of desire precisely for having been carved up under the male gaze (or at least touch), and condensed to an itemised list of reified segments. And yet she is more than the sum of her parts, and the film breathes new life into her even as she allows, even wills, her life to be taken away.

This contradiction lies at the heart of Masumura’s strange, surreal film. “We women are conceited,” Aki tells Michio, who really does not understand women at all, “We need to dominate.” And so Aki does, imposing her own desire on a story ostensibly about Michio’s, and refusing to be somebody else’s victim, plaything or object. Ultimately, this is a tale of Liebestod told very much on its heroine’s terms, and by the final scenes everything is pared down to its most abstract and animalistic. What remains is a sensual, sensationalist work like nothing that has ever previously been seen.

Blind Beast is available on High-Definition Blu-ray via Arrow Home Video from 23 August. 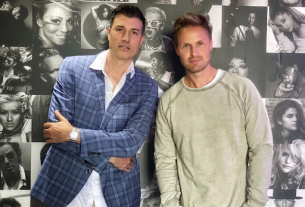 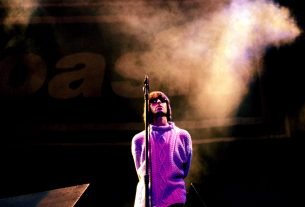 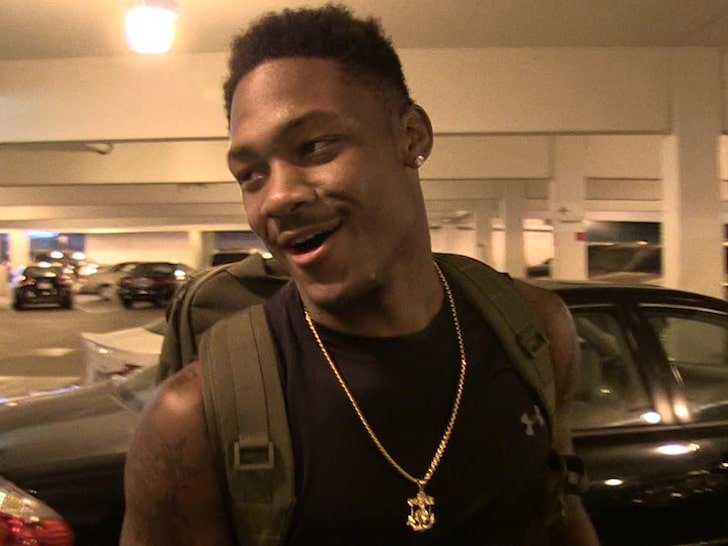