The former EastEnders cast member, 23, wore a sheer grey blouse with a neckline plunging down to her waistline.

Her assets were highlighted under the thin material, which was tucked into high-waisted jeans.

It didn’t take long for her fans to rush to the snap to compliment her daring look, as one posted: ” just wanted to say. You look phenomenal. If you were wearing a quilt or barely anything. You are very obviously beautiful inside and outside.”

A third chipped in: “Always looking so stylish and amazing.”

A fourth wrote: “This is my favourite outfit yet.”

Poor Hetti was forced to fight back against trolls after posting a picture of herself in a skimpy bikini.

She posted a message telling her fans she would delete any “rude” comments as she faced speculation she had edited her picture.

Hetti wrote: “Does everyone have to be so bloody negative on IG. It’s not your life so calm the f down.

“Also, to the people saying my hips are photoshopped… haha. I’ve always had wide hips. It runs in my family.”

She continued: “”I will from now on be deleting any comments that are negative or rude.

“Purely because, a girl doesn’t have time for that. Thanks, bye.”

EastEnders continues on Monday at 8pm on BBC.

Randy Orton on John Cena, 'Does He Still Wrestle?'

LaVar Ball Says Big Baller Brand’s Alive, ‘We Were Bit By a Snake’ 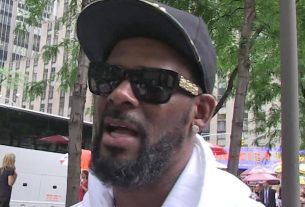