Next year will see the release of Hellboy, a reboot of the original 2004 flick and it’s 2008 sequel.

He is joined by named such as Milla Jovovich, Ian McShane and Daniel Dae Kim in other roles.

But, surprisingly, EastEnders icon Laila Morse landed a role as a BPRD employee in the 2019 reboot.

Laila appears in the trailer, asking the scarlet hero for some ID before she can serve him.

The first look features plenty of gun-slinging, blood, guts and gore as Hellboy attempts to save the world.

But it’s not just him who gets to grips with some heavy artillery, as Laila fires off a machine gun too.

REBOOT: The first Hellboy movie came out in 2004 followed by a 2008 sequel (Pic: Lionsgate)

Of course, fans of Laila’s shouldn’t be too surprised to see her in the film given her links to Hollywood.

There’s actually a secret meaning behind Laila’s stage name, as it’s an anagram for “mia sorella”, which is Italian for “my sister”.

The nickname was reportedly given to Maureen by Italian actress Isabella Rossellini, who once dated Gary.

The actress has appeared alongside names such as Jude Law, Kathy Burke and Jonny Lee Miller in the 2000 film Love, Honour and Obey.

It was the same year that she made her first appearance as “Big” Mo Harris in EastEnders, a role which she returned to earlier this year. 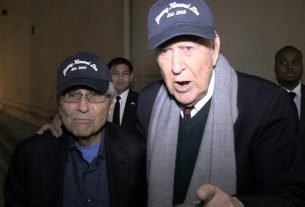