He died earlier this year after battling dementia.

After a heartbreaking funeral, Laurel Thomas was determined to put something in the church to remember her husband.

The village had held a competition to choose a window design to put on the wall.

SHOCKED: Arthur couldn’t believe what he was seeing

It had already been agreed that Arthur, Ashley’s son, would have his design win the competition.

But in a twist that had some fans giggling, Kerry Wyatt’s design ended up on display.

She had created a topless Ashley Thomas in a toga.

Opposite a unicorn, Ashley also had a sheep covering him a very a strategic position.

Taking to social media, fans couldn’t help laughing at the mix up.

One said: “Ashley will be buff for all eternity. Buff Vicar of Emmerdale, never forgotten.”

Another added: “Could have put underpants on Ashley.”

Meanwhile, Laurel is set to move on from Ashley very soon.

She and her ex Marlon Dingle will be sharing a kiss in upcoming scenes.

Feeling insecure in his relationship, Marlon seeks comfort from Laurel and ends up making a move.

Emmerdale continues on Monday at 7pm on ITV. 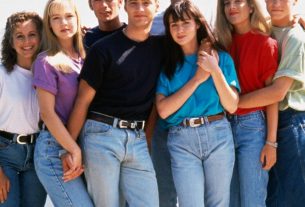