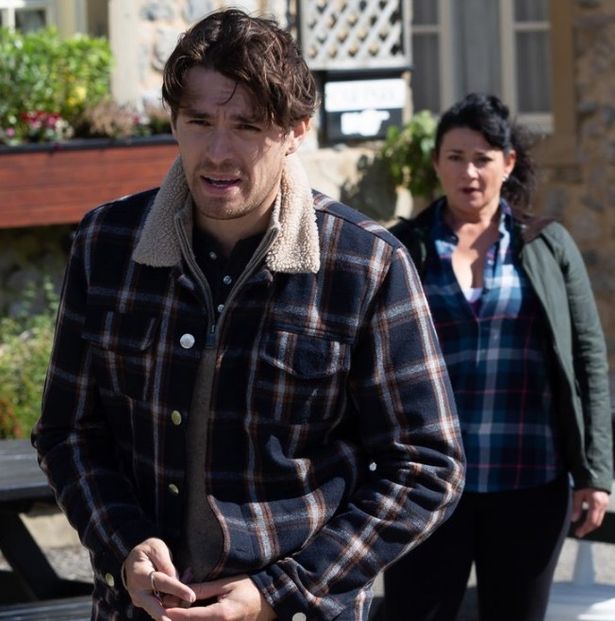 Emmerdale ‘s Cain (Jeff Hordley) and Moira Dingle (Natalie J Robb) have finally got things back on track after splitting earlier this year.

Whilst the pair haven’t got back together, they have grown a lot closer since Moira was knocked down by Jamie Tate in a hit and run accident.

But in scenes earlier this week, Moira was horrified when her younger brother Mackenzie arrived in the Dales to cause trouble.

Whilst the details of their history are yet to be revealed, it has been hinted that Moira was forced to leave their family home when Mackenzie was a child due to a huge secret.

The pair seemingly got on well while they were younger, but Mackenzie was left feeling betrayed by his elder sister.

Moira tries to make Mackenzie see that he doesn’t know the real story behind her decision to cut ties with their family, but is he out for revenge?

Viewers already know that Mackenzie has a vendetta after kidnapping Cain in exchange for money, but it looks like he may have more tucked up his sleeve.

Could he be about to spill Moira’s dark secret to Cain – and will it ruin their chances of getting back together for good?

According to Tombola, Emmerdale is the unluckiest soap for love out of the soaps, as it has the highest divorce rate since starting in 1972.

60% of the marriages that have happened on the soap have ended in divorce, meaning two-thirds of couples haven’t stood the test of time.

It also has the lowest percentage of successful marriages, with only 33% of nuptials lasting until death.

In comparison, Coronation Street has seen 46% of marriages end in a split, with 42% ending successfully.

EastEnders is not that dissimilar to Emmerdale, with a matching 60% of marriages also ending in a split.

However, it has a slightly higher success rate, with 34% of happy marriages, just one percent more than the Dales.

Could Cain and Moira be about to follow those statistics and finally call time on their marriage as the truth about her is finally revealed?

Emmerdale continues on Monday at 7pm on ITV.

Princess Love & Ray J Ready for Baby #2, As Long As The Equipment Works