Love and cheer was the name of the game at the 2018 Victoria’s Secret Fashion Show.

On Thursday night, models like Gigi Hadid, Adriana Lima, Behati Prinsloo and a bunch more strut their stuff down the runway to showcase Victoria’s Secret’s latest lingerie. While the models were the center of attention, performers Halsey Bebe Rexha, Rita Ora, The Struts and others provided the beats for the girls to walk to at the A-list event.

And, of course, Hollywood’s biggest stars came out to see the grand spectacle Victoria’s Secret planned. From Dylan Sprouse to Whitney Port, there were plenty of socialites dying to see the works of art that the designer’s had in store.

What fans didn’t see, however, were the candid moments these stars shared in their front-row seats. Like the row filled with doting husbands and boyfriends and the roaring applause certain models were welcomed to when they walked onto the stage.

To find out about all the behind-the-scenes moments, continue reading below!

Team Bella: This wasn’t Bella’s first rodeo, but by the looks of The Weeknd, Justine Skye and Luka Sabbat, people never would have guessed. When the 22-year-old came out in an angelic white ensemble, her entourage of fans jumped out of their seats to cheer on the model. And when she returned sporting a new and enchanting look, the Weeknd once again stood up to clap for his angel.

Behati Prinsloo and Her Adoring Fans: Unsurprisingly, Behati had a ton of fans roaring to get her attention from the audience, but chief among them was her hubby, Adam Levine. An insider at the event noted the many adorable times that Behati and Adam blew kisses to each other from a distance. Aww! She continued to show him affection from the stage, even after a choir member accidentally stepped on the tip of her wing, causing her to slightly stumble.

A Debut to Remember: In her premiere show, Winnie Harlow was the bell of the ball. As the petite model came into view of the crowd, the audience went wild with adoration.

Adriana’s Bittersweet Farewell: The tears began running when Adriana Lima made her final walk down the aisle of the Victoria’s Secret Fashion Show. Before she made her final strut, the VS crew paid homage to her talent with a tribute video. She then walked the stage to the song “Praise You” by Fatboy Slim, with the crowd cheering her on. At the end, she danced to the Struts with friends Candice Swanepoel, Elsa Hosk and Behati Prinsloo across the stage, but all attention was on a glowing Adriana. The insider said, “You could tell she was having so much fun dancing to The Struts at the end and waving to the crowd.”

Fans can see the show and more behind the scenes moments when the Victoria’s Secret Fashion Show Holiday Special airs Dec. 2 at 10:00 p.m. on ABC. 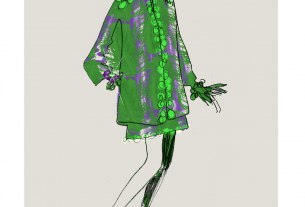 Iris Apfel Talks TikTok, Turning 100, and Her Collaboration with H&M