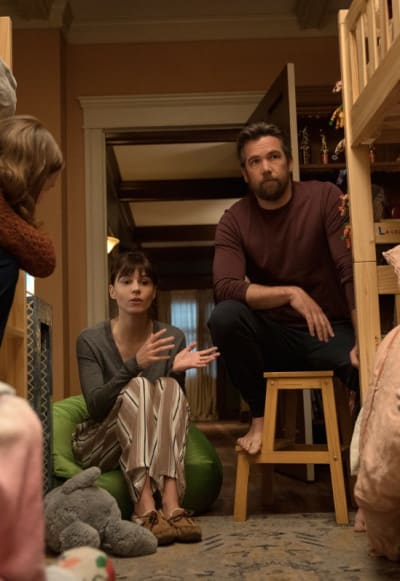 EVIL is at its best when it’s mired in gray areas.

EVIL Season 2 Episode 9 portrayed that gray area beautifully, failing to offer a good explanation for anything but suggesting plenty of reasons to don your conspiracy theory hats.

The stories had many facets, and discussing them should be a good time.

Kristen’s children have taken a backseat to the action this season, and when they are featured, they serve a purpose.

With Andy home, Kristen is under the spotlight. Her behavior is radical, and she’s struggling under the weight of it.

On EVIL Season 2 Episode 8, Kristen’s anger was palpable, and her devil-may-care attitude came back to bite her in the ass. For five young girls looking to her (and, God forbid, Sheryl) for how they should conduct themselves, Catholic school might not be enough to keep them on the straight and narrow.

A video of Kristen’s smackdown in the grocery store was trending. Sheryl was reveling in her daughter’s 15 minutes of fame, sharing it with her granddaughters. Those girls ate it up. Kristen was a hero in their eyes. 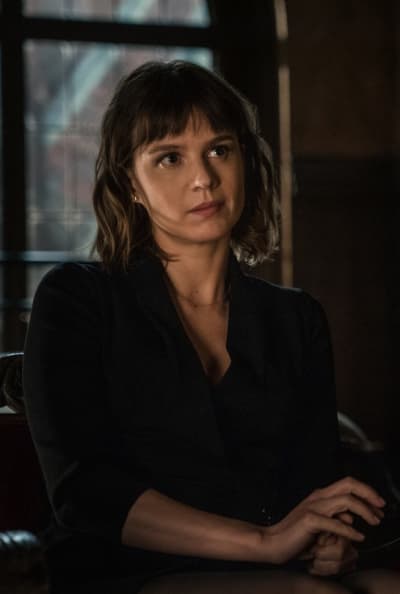 Nothing about what she did was heroic. She represents the mental health community and the Catholic Church and is supposed to be a role model for her girls. And the thing that is worrying her the most is David’s impending ordination.

Before we get to that, though, kudos to Andy for recognizing Kristen is flailing. They hoped Kurt might shed some light on the situation, but the guy isn’t a magician.

Andy’s going so far as to return to Colorado to shut down their trekking company. Coincidentally, in an earlier version of this review, I said I thought he said trucking company.

That floored me, and I asked readers for help understanding. Reader Bob pointed out that I misheard the word, and they had said trekking and not trucking. Readers matter; thanks, Bob! 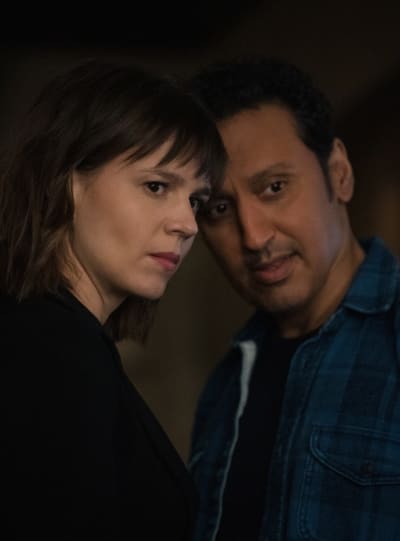 Anyway. The point of mentioning the company’s impending closure is that at some point, with all of these lengthy trips, it seems Andy will not return. The way that Kristen leans on and desires David would take flight in the wake of Andy’s death.

Andy is leaving for a month, and David gets ordained in a month. That can’t be a coincidence.

David still sees Kristen when he gets into a vision groove. They are intertwined, and breaking that connection would be far less interesting than maintaining and increasing it.

Kristen questions everything and leans so heavily on David, so their frank discussion about why David fully intends to move forward with his ordination to the priesthood couldn’t have come too soon. 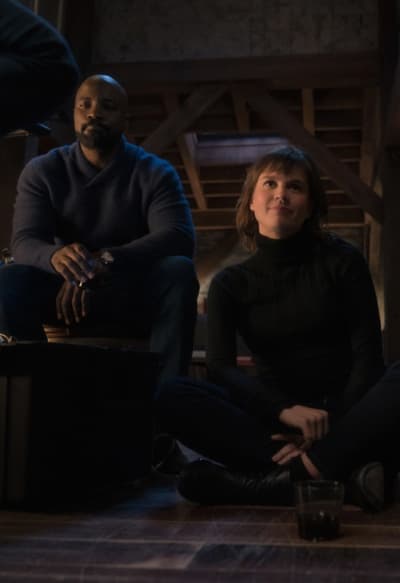 Kristen: Why are you becoming a priest?
David: Now, there’s a segue. [long pause] My mom had me baptized. My dad thought it was idiotic. His life was art and sex. Her life was prayer and mass. I was drawn more to my dad’s life. I followed up until, I guess, five years ago?
Kristen: Julia?
David: That’s when I knew science didn’t really explain life to me. It was like having an instruction manual about how to put together a bike, but when the bike was put together, it didn’t explain the bike. Science is best used as science, not as philosophy or religion. That’s when I was drawn back to my mom. She seemed to understand.
Kristen: What? Understand what?
David: People do bad. People are bad. They try not to reveal it because Americans are obsessed with purity. They can’t even let on that something is wrong, and there’s only one solution.
Kristen: Jesus?
David: No. Forgiveness. People apologizing.

The priesthood wasn’t a decision that David made lightly, so it shouldn’t have been surprising that he wasn’t floored by Kristen’s simple request that he not follow through on his objective.

For all his thoughts about Kristen, it doesn’t seem that they’re strong enough to challenge his determination to become a priest.

If he were easily swayed as a character, David wouldn’t be as intriguing. Pushing forward knowing that he has doubts speaks volumes, and it’s got to be a realistic interpretation of what men considering the priesthood experience.

If people have doubts about marriage, they must be exponentially higher when joining the Catholic clergy as a priest or nun. They sacrifice a lot in their devotion to Jesus. But the most important thing is that they’re still human. That’s why that sacrifice is so important. 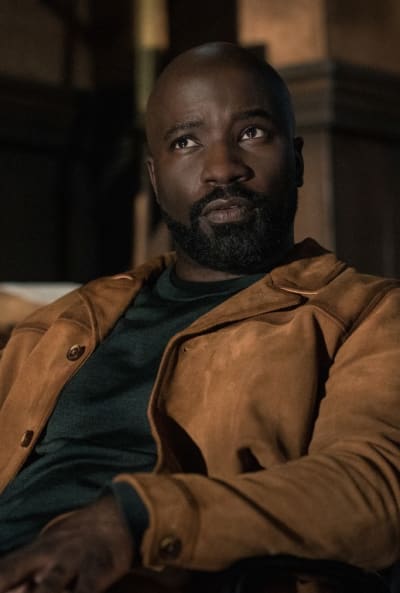 Of course, there are still other avenues at play trying to disturb David’s journey, most notably, the secrecy of the Church even when he works so hard on its behalf and Leland and his, well, whatever it is he’s representing.

Before “U Is for UFO,” the jury was out on what Leland’s sessions with the horned goat beast-man were all about. Was it real, or was it in Leland’s head?

The “therapist,” for lack of a better term for it, wondered if Leland was acting when he crawled to David for help after being strangled by his rosary or if a part of him really wanted an exorcism.

That is such a great question. Leland wavers between being Mr. Cool and something else that it’s hard to explain. 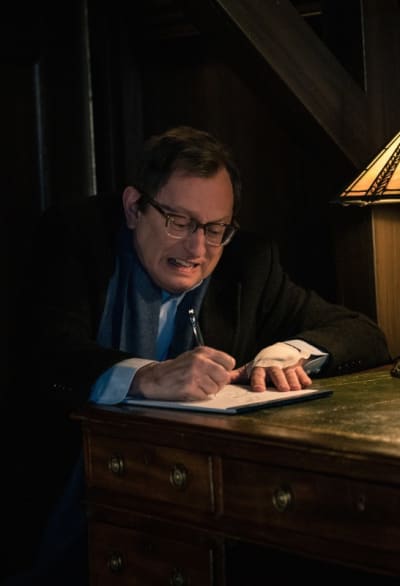 That question irked him, but he was still considering getting some blood from crazy Sheryl because the therapist requested blood, seemingly from a source that didn’t give their permission. But Leland didn’t take to the streets to get blood. He asked Sheryl.

Sheryl is her own enigma, of course. She’s still praying to the cracked baby doll, but she also still entertains Leland and his strange whims. They’re both impossible to read.

Is Leland just crazy, or is he really interested in serving his “the manager” or whatever the therapist called him? Did Leland kill the therapist to prove himself to the manager or because he is nuts?

Those questions are so insane, but that’s why Leland is such an interesting character. And, well, the therapist was real. Leland took a page from Hannibal Lecter’s playbook and served him up for dinner with Sheryl. 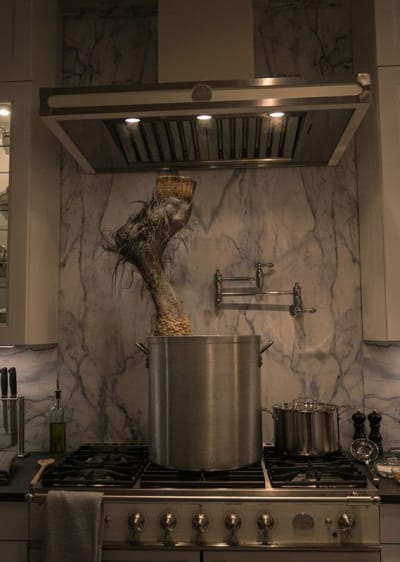 So, whatever is up between the two of them remains a threat to David’s ordination. The other significant and existential threat is David’s distrust of the Church.

Once upon a time, the Catholic Church was at the center of progress, whether cultural, social, or technological. More recently, they’ve languished in that responsibility, allowing others to shadow anything they accomplish.

“U Is for UFO” suggests otherwise. In this story, Marx says that the Church is interested in the possibility of life no matter where God might have created it. 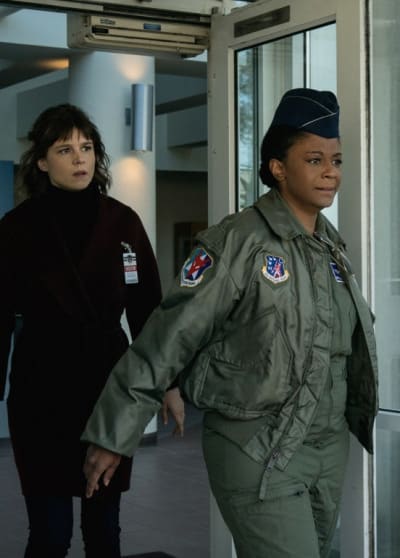 The reasoning was sound, too, as a priest explained it to the team. If what the Church believes is to remain true, they must investigate all possibilities of other life as it could change what they’ve known or present a new challenge.

David: Does the Vatican believe in alien life?
Father Katagas: The Vatican believes in what exists, and if it does exist, does it change the question of original sin?
Ben: How so?
Father Katagas: If there other beings, could they be free of original sin? Would they not even be aware of what it was? Or are we missionaries, asked to share the gospel as we did with indigenous people in the new world.
Kristen: Look at how well that turned out.
Father Katagas: Yes, it’s an easy perch to occupy with your ability to buy what you want, eat what you want. Please, give your property back to the indigenous people. It’s an easy thing to do, give your deed to someone who lived here originally. Look into landback.

Kristen’s sarcasm was met with such ferocity from the priest (with whom I agree entirely) that I almost didn’t believe it. It’s so easy to toss comments over your shoulder or make them under your breath, but walking that walk? Not many do. They’d rather point fingers and act pious rather than being pious.

The investigation uncovered two women, one an Air Force pilot and another a teenage student, who witnessed phenomena that transformed them in some way. 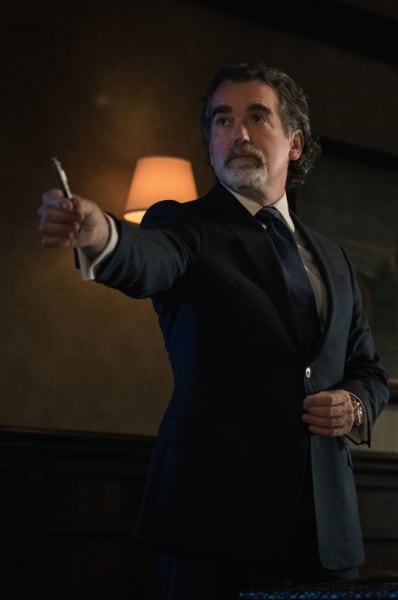 The timing of this storyline corresponds with the government’s admittal that there are unidentified flying objects. Just like the name says, supposedly, nobody knows what they are.

EVIL showed a craft that looked like one of the UFOs that has been in the news lately, as well as revealing light shining on it that resembled a cross—lots of possibilities there.

There were other people like the pilot and the student, but since most of those affected were women, some marginalized, they were written off as hysterical. This time, “The Entity,” the secret service of the Vatican, wanted to take them and the team back to the Vatican for further analysis and investigation.

Well, until Cassie and Asha changed their stories after a level of threat and appeasement. Cassie had been banned from flying, but she was in the air again when she retracted her story. Something much larger was afoot; whether enacted through the Government, The Church, or both didn’t really matter. 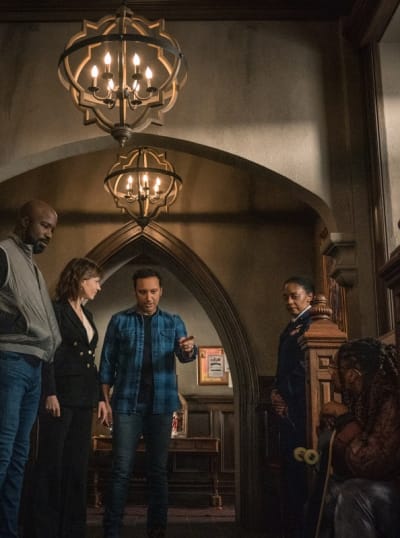 It was an aggravating situation. To come so close to understanding a secret or at least being a part of a group that would further investigate it and have it ripped away left a sour taste in David’s mouth.

Everything they’ve been called on to challenge has been related in some way to something else, much of which leads to RSM Fertility. With one month left to his ordination, David is going to put it on the line to step out on his own, with Ben and Kristen’s help, to finally find what is going on with RSM.

We’ve skated around RMS Fertility for two seasons now, and it’s time for answers. With everything else that’s going on and the long reach of the organizations affiliated with RSM, the time for fun and games could be coming to an end.

A personal investigation is sure to come with dire consequences, but we’re ready. 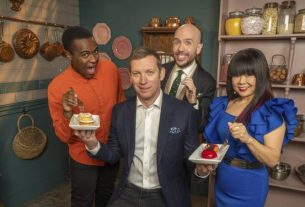 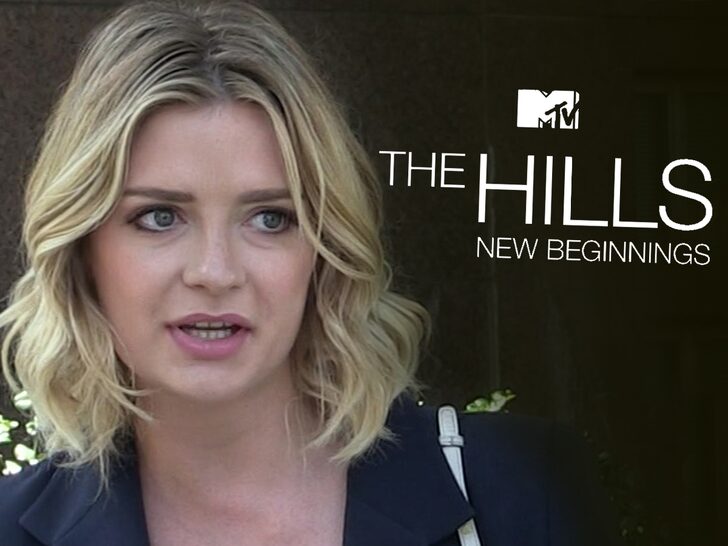 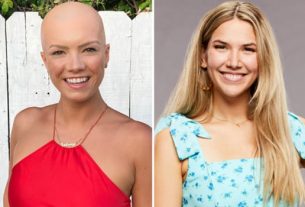 Big Brother Houseguest Departs Ahead of Season Premiere: Find Out Who’s Replacing Her!