The designers at Fashion Nova definitely aren’t afraid to experiment with bold styles.

For this reason, the online retailer has become famous for it’s out-there looks.

Over the last few months, it has divided opinion with its skimpy swimwear and barely-there evening gowns.

And now, the store is selling a dress that leaves nothing to the imagination.

The Nova Vixen One Shoulder Dress is currently being flogged for £38.

If that wasn’t saucy enough, the garment boasts a hip-grazing side split and low back.

DRESS TO IMPRESS? This eye-popping frock would be sure to drop jaws (Pic: fashionnova)

Despite the frock’s racy nature, customers seem to be pleased with it.

It has been given a five star customer rating on the Fashion Nova website.

Some Instagram users also seem to be fans of the dress, as a picture of a model wearing it has racked up 7,400 likes on the platform.

But while some claim they’ll be rushing out to buy the item, others aren’t so sure.

The garment sparked some confusion online, with many saying they wouldn’t be caught wearing it.

Another commenter wrote: “1. This is not cute.

“2. It is 10C outside and getting colder, why would you advertise this now and not three months ago.

“3. Who is actually buying this I just wanna know?

Another said: “I love Fashion Nova… but WTF is this?”

Our Favorite Tote Bags for Spring 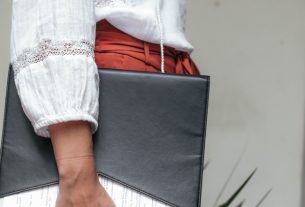 How to Rebuild Your Career During COVID-19