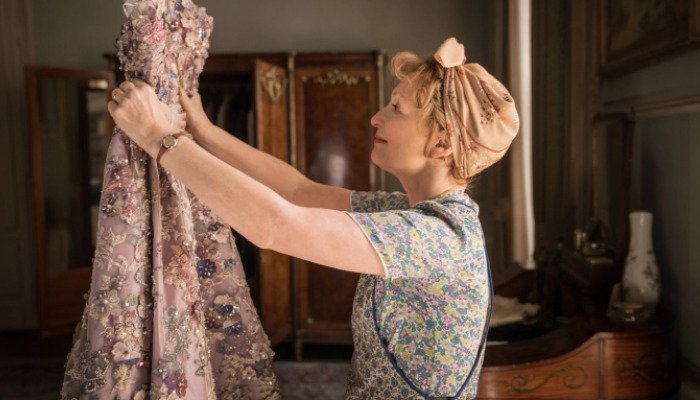 Filmmaker Anthony Fabian’s new delightful, but overlong, comedy, Mrs. Harris Goes to Paris, stars the incomparable Lesley Manville (Phantom Thread) as a charming woman of integrity who saves enough money through her daily endeavors that she is able to end up financing a dream of hers–to have her very own Christian Dior dress. Set in the late 1950’s, Manville portrays the lead character, Ada Harris, with terrific sophistication and a sense of pride that makes Ada tremendously likable. This film starts off strong and ends well but suffers a bit from a meandering midsection that plods along a bit slowly. With that being said, though, it showcases an energetic turn by Manville that could get the actress a Golden Globe nod for Best Actress in a Comedy or Musical when the nominations for the year’s films are announced.

As the movie (based on a Paul Gallico novel) begins, we meet Ada, a widowed woman with great charm. She’s a housekeeper with class, who is thrifty with her money, well for the most part anyway. In a moment of risk-taking, she goes to a dog race and bets a large sum of cash on a dog who stands absolutely no chance of winning. Thanks to her kindness and likability, though, that mistake ends up working in her favor. The charismatic Ellen Thomas co-stars as Ada’s friend, Vi Butterfield, who steals some of the film’s scenes as Ada’s best friend and confidante. Ada soon sets her sights on owning her very own Christian Dior dress. This film is set in a time where such fashionable ways of dressing were reserved only for the most elegant and sophisticated folks and a common woman such as Ada stood very little chance of making her dream come true back then.

Anna Chancellor, in a brief but well done performance, plays Lady Dant, Ada’s employer who doesn’t pay Ada on time and has a bit of a difficult personality that clashes with Ada’s values of kindness and decency. Chancellor sets the stage for how some of the wealthy people and some of the commoners will clash throughout the film. Isabelle Huppert has a meatier role in the movie as Claudine Colbert who was a key figure at Christian Dior and who tries to suppress Ada’s dreams throughout the movie. Huppert manages to expertly portray the woman who initially stood in the way of Dior transforming into the fashion company it eventually became.

A good scene in the early stages of the movie focuses on the discovery that Ada’s husband had died in World War II several years prior. A man comes to visit her and, though Ada thinks she is going to end up owing money from the way the character initially talks to her, it turns out Ada is owed a handsome sum of money herself which could help to fuel her dream. When the action shifts from London to Paris, the movie gets bogged down in a series of scenes that aren’t as strong as the early sections of the picture and it gets too watered down with its insights into the fashion world and displays of how the fashions were worn in the time period.

There are a number of solid supporting turns here. Lambert Wilson superbly plays the Marquis de Chassagne, a character who helps push Ada in the right direction. Lucas Bravo, in a winning turn, serves as the timid but intelligent accountant Andre Fauvel who yearns for the model Natasha (a radiant Alba Baptista) and learns much from Ada’s wisdom throughout the picture. Huppert, however, manages to come up with the most well-realized performance out of all the background characters in the picture. We can hate her at first but there is enough substance here to understand Colbert as a character thanks to Huppert’s work.

Manville is outstanding. We don’t see her nearly enough in movies. Mrs. Harris Goes to Paris gives her a juicy role to sink her teeth into as the lead character tries to not only get her dream dress made but also yearns to find a reason to wear it somewhere. You’ll smile as this woman finds out who she truly is and why she is so well admired by the majority of those around her. When she almost organizes a strike, it’s a stand-up-and-cheer moment to be sure.

I haven’t mentioned a lot of the minor problems with the movie. There is mostly about a twenty-five minute section of the movie in the middle that has some pacing issues which detract a bit from the quality of the movie as a whole. Manville isn’t affected much in terms of the quality of her performance but there is just too much going on at one point and it takes away a bit from the genuine entertainment value of Ada’s story.

Despite its flaws, Mrs. Harris Goes to Paris is still a great way to see Manville excel in a role she was simply born to play. If the year was over at this point, she’d have an Oscar nomination in the bag. We’ll see if the momentum carries throughout the year but she’s almost assured to get a nod at the Globes, as previously stated. This is a fun movie which is a welcome addition to the summer which has enough blockbuster movies which don’t live up to expectations. Here is a movie full of heart which gives Manville the chance to shine bright. It’s worth seeing. 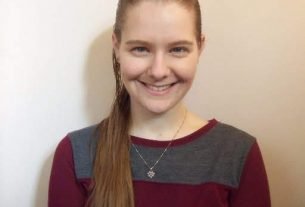 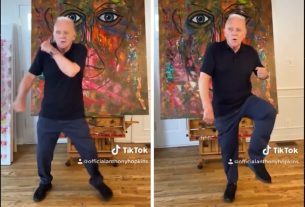 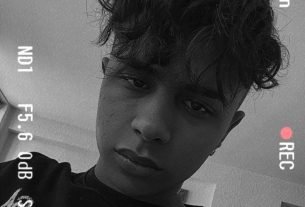