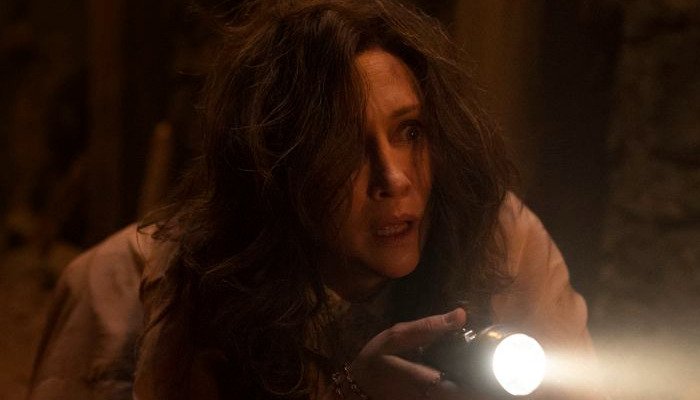 The Conjuring: The Devil Made Me Do It Review

The Conjuring: The Devil Made Me Do It starts out phenomenally. It opens in 1981 with an excellent sequence where the audience learns of a possessed young boy named David Glatzel (Julian Hilliard). This kid, David, who has a demon inside of him, is taken down stairs as he claws the walls. A priest tries to exorcise the boy to no avail. David’s sister, Debbie(Sarah Catherine Hook)’s boyfriend, Arne Cheyne Johnson (Ruairi O’Connor), invites the demon inside the child to take possession of himself instead. There are some high tension, truly frightening moments here and it sets the stage for what is to come in director Michael Chaves’ third installment in The Conjuring series.

“The Conjuring Universe” has seen other films such as the Annabelle pictures and The Nun but there’s something about the regular The Conjuring movies that have great appeal. As Ed and Lorraine Warren, paranormal investigators, the central characters of the pictures, Patrick Wilson and Vera Farmiga are like cinematic magic. Their on-screen chemistry is always on-point and this new film also sheds some light on how they met and fell in love when Lorraine first met Ed who was a movie theater usher. When Ed suggests, in a key moment in the film, that Lorraine not go crawling under a house because she’ll ruin her dress, it’s sweet and, of course, the last thing on Lorraine’s mind is whether or not her dress will get dirty. There’s investigation to be done and these two characters are absolutely superb whenever they’re on screen together playing off each other in such a way that they are both relatable and charismatic.

However, the plot of the new picture derails after about an hour. That’s not to say there aren’t great scenes early on such as the one where Lorraine encounters some rats while crawling under the aforementioned house and finds a devilish artifact that she may wish she never found. Even late in the picture where our investigators encounter a zombie-type demon that looks like a sumo wrestler, there’s definite sustainable interest in the plot. The problems lie in the fact that the movie acquits itself as a standard possession horror film in the second half. Whether or not Arne, who is the main possessed character in the film, will stay in jail or not for murder certainly keeps the audience interested but I felt there was too much repetition in the jumps and scares the movie ultimately offers. The “thrills” found in the latter part of the film feel run of the mill and that’s a shame because the movie hooks us in the beginning only to disintegrate right before our eyes.

With that being said, there are some remarkable performances by actors other than Wilson and Farmiga. O’Connor is a true stand out as the young man who loves his girlfriend Debbie and makes a huge sacrifice for her by letting the demon from her brother enter him. We are intrigued by this character Arne, and want to see him set free from jail and acquitted of murder. After all, the devil did make him do it. Sarah Catherine Hook holds her own as Debbie and child actor Julian Hilliard is first-rate. In a scene with a water bed, Hilliard captivates the audience as they wait to see which way the plot will turn next.

It is said that the plot line of this film was inspired by a real-life legal case where demonic possession was used as a defense in court. The ending re-enforces this information as it shows the real-life counterparts to the characters in the film. Ed and Lorraine are, of course, inspired by real people as well so why do the generic thrills the film produces at the conclusion seem so manufactured? A film with all this authenticity behind it should feel smoother and, ultimately, scarier than it does at the conclusion.

Farmiga is, by far, the film’s most valuable player. She puts in a passionate turn such as in a scene where Lorraine seems possessed by a real-life killer/demon and Ed must stop her from letting the demon take her over. Much like the character of Lorraine, it feels that the demons of mainstream Hollywood possessed the film’s ending and since the conclusion feels so cliched, it’s hard to truly recommend the new picture. But, it has its moments for sure and Farmiga is a true movie star in every sense of the word. Wilson isn’t half-bad either.