At six-foot-one, George Russell is one of the tallest Formula 1 drivers on the grid — but don’t expect him to slam dunk a basketball any time soon.

“I think that’s just a bit outside of my abilities,” jokes Russell as he clanks a jump shot off the back rim of a court in downtown Miami. The 24-year-old British driver is shooting hoops with Detroit Pistons center Isaiah Stewart at a Puma photoshoot in advance of this weekend’s inaugural Miami Grand Prix, and Russell warns that his game leaves a lot to be desired.

“At last year’s U.S. Grand Prix, there was an event where all the drivers took free throws,” he tells Stewart. “I’m pretty sure I was the only one to go 0 for 10!”

Fortunately, Russell is good at racing — so much so that Mercedes, the winner of the last eight F1 constructor’s championships, signed him to a long-term deal to partner with seven-time champion Lewis Hamilton and seemingly serve as his heir apparent. Although the 2022 season has started off slowly for Mercedes, which trails Ferrari and Red Bull in the team standings, Russell has been a bright spot: he’s the only driver to place top five in each race, punctuated by a podium finish at the Australian Grand Prix.

We sat down with Russell to chat about this weekend’s race, his thoughts on teaming up with a legend, and the great expectations of joining Mercedes.

GQ: There was a recent F1 video testing how well the drivers know U.S. sports teams, and the results…weren’t pretty. Do you follow any American teams or sports?

George Russell: To be honest…no! I did go to an NFL game in London, which was the Miami Dolphins versus the Jacksonville Jaguars. American sports do things differently compared to Europe – the entertainment side, the show they bring, and getting everyone in the crowd so hyped up. It’s hard for me to follow it all from Europe, but if I ever lived in the U.S., I’d be into it for sure.

In the world of F1, you made a name for yourself by performing well for a lackluster Williams team. Is there any pressure now stepping into Mercedes, which has championship aspirations?

The word “pressure” is being thrown around a lot, but it feels no different—every year of your life is the biggest of your career. I’m only at Mercedes because I performed well at Williams and treated that as the biggest year of my life. It doesn’t matter if you’re in a silver car, black car, or blue car, your mentality is the same when you put your helmet on: drive as fast as possible and fight for victory. Once you’re in the car, you don’t even think about all of the other stuff.

There’s a photo of you from many years ago as a kid trying to get Lewis Hamilton’s autograph. How does it feel to now be teammates with one of your childhood idols?

It’s surreal, especially when I look back at that photograph, which is probably from about 13 years ago. Behind closed doors, Lewis is just a normal guy, and we’ve spent some good times together recently. As you grow up and become part of this F1 circus, you recognize that all of these superheroes are just normal people at the end of the day. They’re extremely talented, sure, but they’re still just people. But, yeah… it’s still a bit crazy [to be Hamilton’s teammate].

What has surprised you the most about working with him?

Obviously, I knew his talent on track, but what’s been inspiring is to see how he works with his engineers and motivates the team. He recalls everything that happens on the track so well, the little details that make a difference when you explain it to your team and translate it into data. To be honest, I’ve enjoyed sitting there just watching how he does things. What a privileged position I’m in.

In F1, teammates are also rivals. Would outscoring Lewis be a big personal accomplishment?

It’s not something I think about or care about, really. I’m here to win championships, and to do that you have to beat everybody. At the moment, we’re not in that position, and we need to work together to push this team forward and give us the opportunity to fight for victories. So I don’t care if I’m ahead of him or he’s ahead of me if we’re fighting for fifth and sixth position. No one remembers who finishes P5 in the championship.

You started your career in karting and raced alongside a lot of today’s F1 drivers, including last year’s champion, Red Bull’s Max Verstappen, and this year’s points leader, Ferrari’s Charles Leclerc. Does it feel like you’ve all grown up together, in a sense?

Yeah, it’s really cool. As 12-year-old kids, we had no idea what any of us would go on to achieve. I remember 2011 was a very big season [in karting], competing against Max, Charles, [Alpine driver] Esteban Ocon, and [Aston Martin driver] Lance Stroll. Half of today’s grid, we were all in the same paddock together at that time.

Does that familiarity help you race against them now in F1?

For sure. We know each other’s strengths and weaknesses because we’ve raced together for so long. It’s quite unique, really.

This weekend’s venue, the Miami International Autodrome, is a completely new track. Not only have you never raced on it, but no one has ever raced on it. How do you prepare for that?

Well, we’ve got the simulator, where we do a number of laps to learn the lefts and rights. But you have to go in with an open mind because nobody knows what the track will offer. Will grip be high? Will it be bumpy? Will the corners be exactly as they planned it, and can you ride the curbs like you expected? You need to be dynamic and try new things in practice, see what works and what doesn’t.

F1 is obviously blowing up in the U.S. How have you enjoyed being in Miami and experiencing the buzz around this inaugural race?

I’ve been here a few days now and I really like the city. It’s a cool environment, everyone’s upbeat and happy, and the arts scene is really unique.

The first time I noticed how big F1 was getting in the U.S. was last year’s race in Austin where we had 450,000 fans, which was crazy. Now it’s coming to Miami and to meet so many people here who know about F1 and who recognize you, it’s exciting.

Yeah, I actually won a go-kart race in Vegas in 2011. Even as a kid, I really enjoyed that city. Similar to Miami in that it’s very upbeat. I’m looking forward to that next year—it’s going to be one of the biggest sporting events in the world.

What are your predictions for this weekend’s race?

I think this Miami circuit will suit us slightly better than what we’ve seen the last two or three races, though I think we’ll still be a step behind Red Bull and Ferrari. But we’ve got some new things to try which will point us in a good direction for the rest of the season. We just have to make sure that we seal these points and stay within arm’s length of the championship lead.

So if Mercedes can stay close, you think you can still win the championship this year?

There’s definitely a chance. I’m not losing faith—I still believe we can win this thing, and that’s the mentality I’ll always have. It’s never over until it’s over.

VSCO Girl Halloween Costume: How to Pull It Off 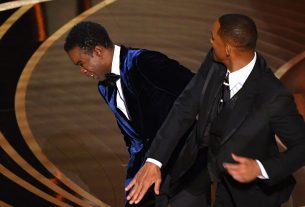 The LAPD Was Ready to Arrest Will Smith After Chris Rock Slap, Says Oscars Producer Will Packer