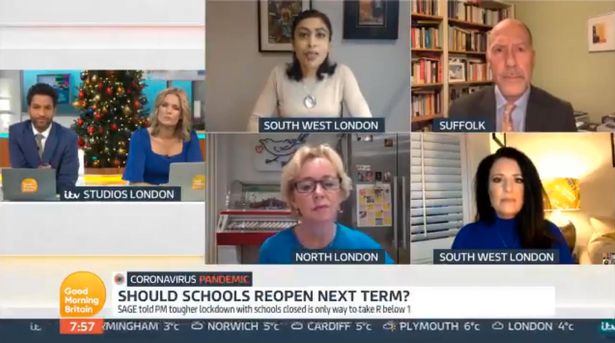 Good Morning Britain fans have been split down the middle over the issue of allowing children to return to school in the new year.

The government are currently determined to see schools reopen on January 4 for the start of term.

However, calls are growing for the return to be delayed after the rise of the second strain of Covid-19.

The government’s medical advisory body SAGE are currently pressuring Boris Johnson’s government to go beyond their plans of a staggered return.

During Tuesday’s edition of Good Morning Britain, Charlotte Hawkins hosted a live four-way debate with some people arguing that children will be able to spread it amongst each other and then their own families.

In contrast, some argue that closing schools will have a long term detrimental effect on children’s ability to learn – especially after they were closed for a large chunk of 2020.

School principle Kelly Uppal instead that it is possible to strike a balance between education and safety.

Explaining how his school will see a staggered return, Uppal said: “We are continuously making sure our environment is as Covid secure as possible but most of all that education continues for all of our students.”

The topic quickly set social media alight with Charlotte Hawkins telling viewers GMB has seen a flurry of messages on either side of the debate.

Taking to Twitter, one viewer wrote: “I hate this argument that just because people with underlying health conditions die ,it doesn’t matter.”

“It’s either a deadly virus, or it isn’t. If schools can be open so should everything else. #gmb,” a second added.

A fourth chimed in: “Convinced I caught Covid off my kids from school week before Christmas, I spread it to my mother and brother #CloseTheSchools #gmb.”

However, others called for the government to stand its ground.

One viewer flagged: “Closing schools doesn’t stop kids from spreading the virus.. it doesn’t keep them in the house away from other people. They are still on the streets, at their friends houses etc. #gmb.”

Another said: “It’s all very well closing schools down but stay indoors and do not go to the Kent seaside and not social distances please.

“This is what families are doing in Whitstable.”

The Stranger Things 3 Moments We Can’t Get Over