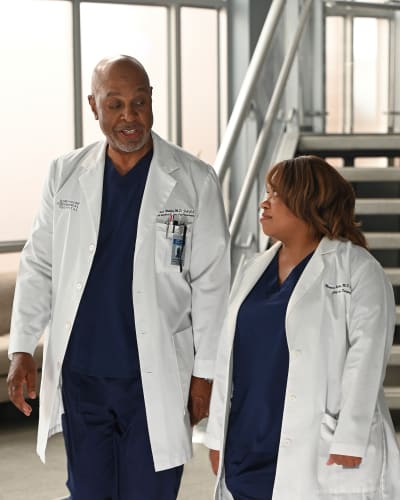 This series is known for its Thanksgiving episodes. They’ve often been some of the most memorable of the show’s tenure.

While there were some good moments here and there, overall, Grey’s Anatomy Season 18 Episode 6 won’t be making it on the Greatest Grey’s Turkey Day installments list.

It had some drama, a scare, “framily,” and two steamy hookups, but it still managed to be a lackluster hour in general.

Carrying over from Station 19 Season 5 Episode 6, Bailey was having a tough time processing that Dean Miller’s father arrived at the fire station when she was having Thanksgiving dinner with Ben and took baby Pru. In her heartbreak, she opted for a full day at the hospital.

Except, for a holiday, there was a startling lack of fun-filled, bizarre cases of missing digits, burn victims or a relative stabbing another in the eyeball with a fork or something. You know, the fun holiday stuff.

Bailey managed to step in and support Noah’s wife after returning to the hospital worse off than ever before, barely clinging to life.

As someone who has endured a lot as a woman, wife, mother, and child, she knew all too well that Noah’s wife was desperately trying to keep it together and remain strong. 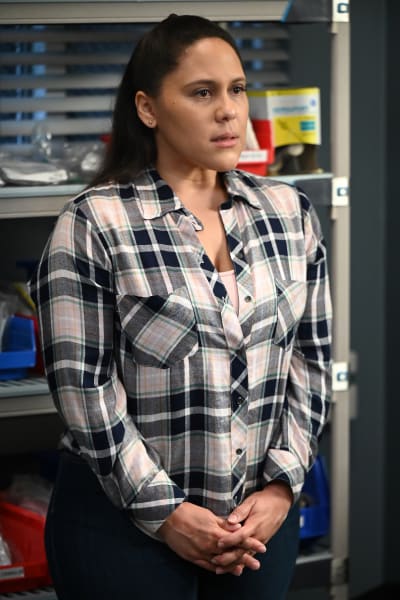 Her advice to the woman was profound and something that women often need to hear. We often pride ourselves on maintaining our emotions — keeping it together for our family and friends, who we feel are dependent on us being “the strong one.”

As Bailey said, everyone else is always allowed to fall apart, but in the case of wives and mothers, and such, it rarely seems to be the case. She gave Noah’s wife the space to scream, cry, and do whatever she needed to get all her emotions in a cathartic way rather than hold them inside.

But everyone else around you gets to fall apart. Take your turn.

She gave her space to fall apart, and oddly, it was a bit funny to see her shut the door on the woman abruptly like that, but it was effective.

It was a distraction for Bailey, but she allowed herself to have a moment to process what was happening and sympathize with Pru, too. And Webber was right there to uplift her with encouraging words and a homemade pecan pie from his pregnant patient.

The friendship between Webber and Bailey remains one of the greatest parts of this series all these years later, and it made you smile when she expressed gratitude for Richard Webber. We agree with that, Bailey.

Webber’s patient he shared with Jo was such a sweet woman, and it was scary when it seemed she would bleed out and not make it back to her five kids on Thanksgiving.

Much like Bailey’s advice to Noah’s wife, Jo’s pearls of wisdom to her patient’s husband were things that needed saying.

The poor woman had five kids for her husband, and he’d probably have a million more. Society does make women feel as if they should do things a certain way or not vocalize their needs or ask for help. 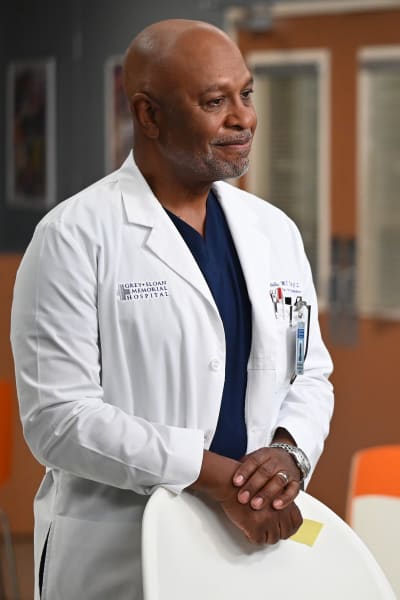 She almost died having her last child. You could understand why she wanted her tubes tied, and, unfortunately, she didn’t know how to talk to her husband about it since he loved her enough to do whatever she pleased.

She was the cutest, too. One couldn’t help laughing when she drove herself to the hospital and brought a pecan pie for the doctors, too. She was so polite and pleasant despite her pain!

Our society doesn’t give women permission to talk about what they want, say they need help. Maybe don’t ask her if she needs help. Help.

Noah is dying, and there’s no saving him. It won’t be long now, either, and it’s a tragic case. Owen’s investment in this one has opened up this other side of Owen. It’s been refreshing that Owen had a storyline that isn’t devoted to his love life.

He feels much lighter, happier, and grounded this season, and he’s been so enjoyable to watch. He took care of Noah’s son and knew how to distract him. And his family scenes with Teddy, Megan, and Farouk were charming. 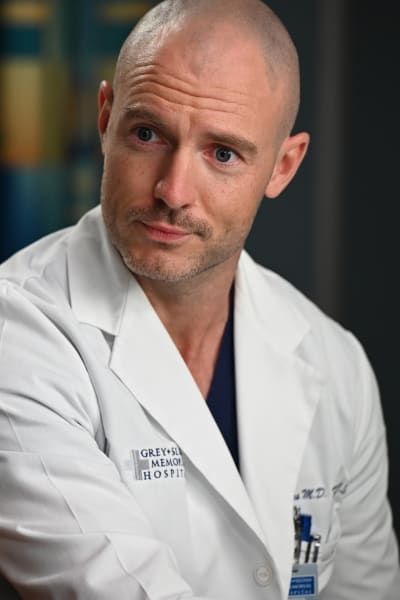 The Hunt siblings are funny together, and you always see a much lighter side to Owen when Megan is around. The two of them avoiding their mother for the holidays was amusing, but Teddy adding some context to why she’s doing the same was notable.

We keep getting these glimpses of Leo in dresses and Teddy’s attempts to handle that because of how fearful she is of a world that will judge her kid harshly. She avoided Owen’s mother out of fear that she’d say something if Leo walked out in a dress.

On the one hand, leaving Leo there to deal with Mrs. Hunt’s comments or behavior possibly may not have been the best idea either. But she knows that she’s fiercely protective of Leo, and if she reacted, it would be a relationship ruiner.

It’s one of those background stories that seems like it’s leading to something more significant that will be in the forefront down the road. 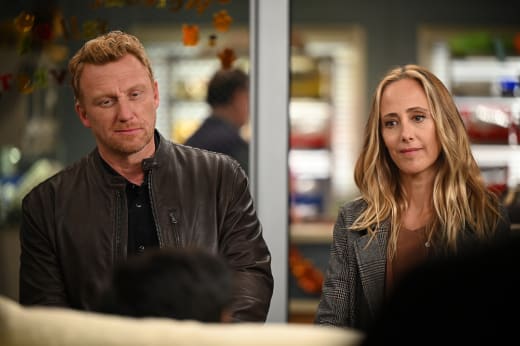 But it was a good thing that Owen and Teddy were at the hospital. Teddy needed to be there to support Megan when Farouk’s heart stopped. The poor kid has been through the wringer, and on such a slow-moving hour, you couldn’t have put it past the series if they chose to kill Farouk off or something.

Fortunately, that wasn’t the case, but he is on ECMO and the transplant list.

It still feels like Megan has very little to do so far, and it’s almost like they brought her back to expand Hayes’ storyline. Taking care of Farouk has given him something of significance, and they’re also pushing the Merhayes agenda with every interaction.

Before things got serious, they were flirting and talking about Game night, his kids, and things of that nature. The vibes between them are there. And Megan trusts him enough to do what’s best for her son when he has to make the tough calls that she and Teddy couldn’t. 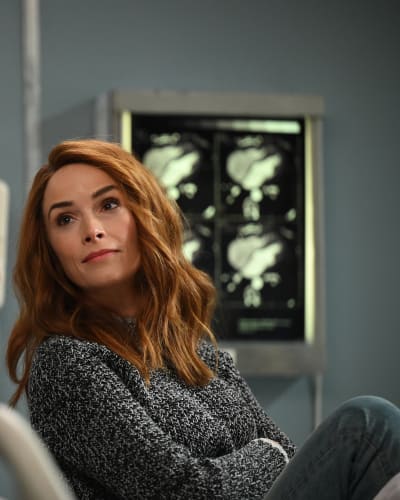 Speaking of bringing people along to further storylines, Schmico was back in the limelight a bit, and Levi’s mother has become the Schmico fangirl. It’s a turnaround from the earlier days when she had issues with her son’s sexuality.

But boy did she come on strong. She was the quintessential meddlesome mom who was already moving Levi and Nico’s relationship 1000 steps ahead, planning their wedding and children and getting the rundown on his medical history.

Amelia: Link, what? Is it burning?
Link: You’d have to turn the oven on to burn it.

Schmico is pleasant enough and all, but as time goes on, the shine of this relationship wanes when we do not get any development for Nico. He’s only ever there for Levi. He doesn’t stand out on his own as a character. We know little about him, and he never gets any focus.

He’s a severely underdeveloped character. It was the perfect opportunity to learn more about him or maybe introduce us to his family or something, but Levi wasn’t even in the room the majority of the time, and it was still only about him. 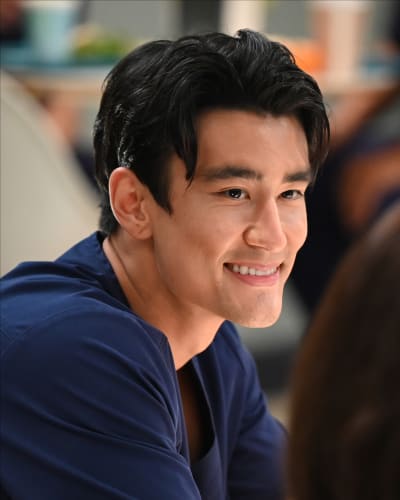 Meanwhile, the Amelia and Link thing remain confusing as all hell! Does Amelia know what she wants? She runs so hot and cold that you cannot keep up.

It’s unfathomable that things got so weird between them that she didn’t invite him over for dinner in the first place. She knows that he has this hangup about his parents shuffling him back and forth for two-holiday celebrations, but she planned on keeping Scout for Thanksgiving while he was alone?

The two of them teaming up to take care of Mer’s kids again and cooking a Thanksgiving dinner was cute, though. You could tell they fell into those same habits.

And Amelia seemed to enjoy the domesticity. It was hilarious when she thought she was cooking the turkey but hadn’t even turned on the oven. 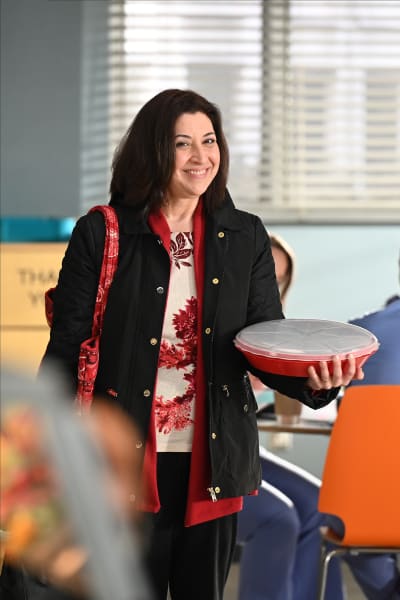 And how freaking cute was Link dancing it out with the kids? You could see Amelia’s feelings for him shining through when she watched him, so it wasn’t surprising when they were making out and having their sexy time.

In fact, this suits them more than Amelia abruptly dumping him and then behaving as if their relationship never happened. It’s believable that they would have this limbo thing where they’re still physical with each other or have to adjust to what their lives look like while they’re not together.

And hey, this girl is never going to turn her nose up at some Amelia and Link sexytimes. The downside of this is that it could lead to mixed messages. What does it say that she didn’t want to marry him, have more kids, or live a domestic life, but then she got turned on by all of that and fell back into bed with him?

And what does that mean for this flirtation she has with Kai? She started the hour flirt texting with Kai and ended it with Link. 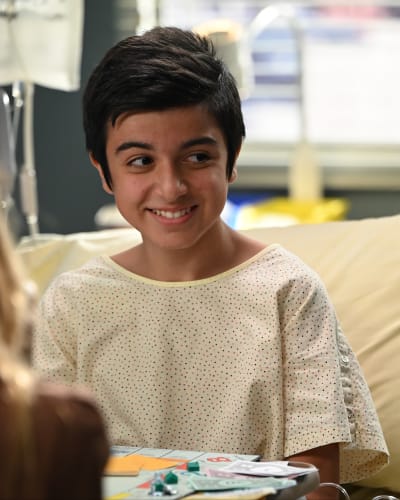 As an Amelink fan, it’s gratifying to know that there’s still something between them because of how poorly they handled tearing them apart.

But it’s messy as hell to start this Amelia/Kai thing to get some fans invested and then make this move. If this is Amelia and Link’s closure, then fine. If this is a way of opening the door for a polyamorous storyline for Amelia, then that could also be interesting.

Mer: You said were.
Nick: What do you mean?
Mer: You said Charlotte and surgery were your priororities.
Nick: Right. Priorities can change.

But it’s also one of those things where if they don’t handle this storyline right, depending on how it plays out, the show would’ve queerbaited viewers and ship preferences aside, that doesn’t sit well either.

Meanwhile, things got heated between Nick and Mer, and their love scene was hot as hell. 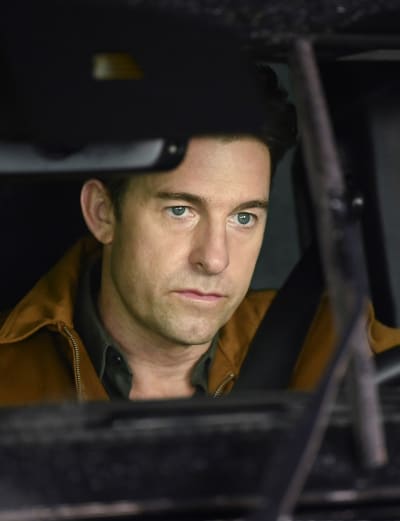 Mer didn’t seem torn up about missing the holiday with her kids, and weirdly, Nick was way too insistent about going to a cabin with a single mom. It was also odd when he implied that his niece, who he adored, was no longer a priority, but Mer is?

Link, today was — you are nothing like your parents.

But that aside, he drove through a winter storm to be with her. It was nerve-wracking when he was in the car, and you couldn’t put it past this show to have him in an accident or something, but perhaps the Derek parallels would’ve been too much then.

Mer and Nick always do this thing where they have these conversations where they just talk about anything, and something is enamoring about that. It’s all the innocuous things that shouldn’t mean much but somehow do. 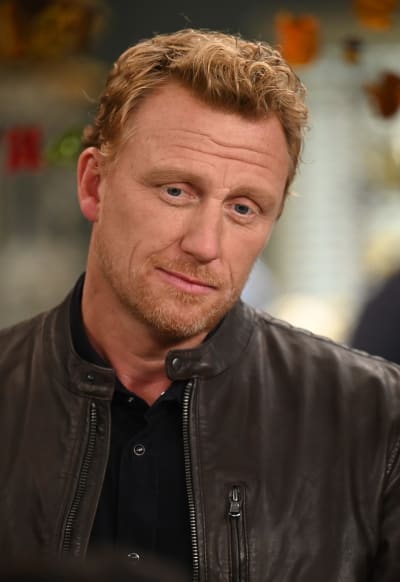 It’s light and easy. Although, it was a bit dull this time around. Things didn’t get interesting until they fell into bed together. I’m curious what their relationship will look like when they’re not in their own bubble, which is how we’ve seen them ever since we met Nick Marsh.

The hour lacked some of the pizazz that Thanksgiving episodes used to have. It was mostly forgetful.

Over to you, Grey’s Fanatics.

Is Amelia and Link’s relationship confusing you? Did you enjoy that steamy Mernick scene? How worried are you for Farouk? Hit the comments.

You can watch Grey’s Anatomy online here via TV Fanatic. 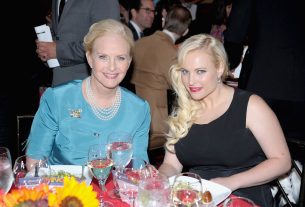 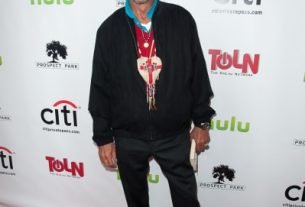 Michael Nader Dies; All My Children and Dynasty Star Was 76 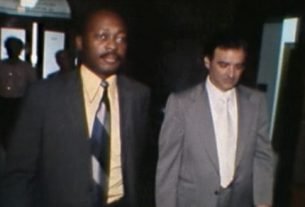