Holly Willoughby has been happily married to Daniel Baldwin since 2007, but she got another offer of marriage today.

Today on This Morning, Holly and co-host Phillip Schofield welcomed some of the cast of The Secret Life of 4 Year Olds onto the show.

But before the duo could speak to the kids’ parents or psychologist Dr Elizabeth Kilbey, little Arthur had an important question.

He handed Holly a bouquet of flowers and a present and asked: “Do you want to marry me?”

Holly was overwhelmed with the adorable display of adoration, even more so when Arthur began kissing her arms and lap.

Phillip joked: “Back off, Arthur.”

It was clear Arthur was a little joker, as he soon ran right up to the camera and pretended to be a monster.

Later, he ran up to Phil and gave him a hug, with Phil saying: “My turn now? You’re so fickle!”

Holly opened her present and revealed Arthur had given her a box of chocolates, which put her new year’s resolution at risk already.

While Arthur seemed to be a hopeless romantic, his co-star Na’Shae is Kim Kardashian in the making.

Holly and Phil asked her how to take the perfect selfie and Na’Shae wasted no time in demonstrating.

She and Arthur posed for a picture, but Arthur stuck his tongue out and licked Na’Shae’s cheek too.

At the end of the segment, Arthur jumped into Holly’s lap once more and gave her a tight hug.

When the show returned from a break, Holly and Phil were clearly still in a playful mood, as Phil ran towards the camera as Arthur had done. 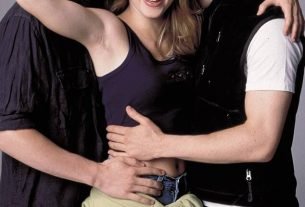