Victoria Clay is never shy of flashing the flesh and is well known for her eye-popping frontless dresses.

Victoria rose to fame after being a contestant on Britain’s Next Top Model, describing herself as: “An English Rose with great boobs.”

Despite losing out to Ivy Watson on the top spot of the show, the hot redhead has managed to bag herself plenty of photo opportunities since.

With her constant stream of red hot photoshoots on Instagram, the Liverpool lass has racked up thousands of Insta fans.

Following on from her own daring style, Victoria often uses her social media site promoting self love and encouraging her fans to wear whatever they please.

Last night the 23-year-old joined a star-studded line-up of celebrities for a sizzling London Fashion Week event and didn’t disappoint her fans in an equally daring number.

Smouldering in front of the photographers, the David Bowie fan dared to bare in a completely frontless dress with ruffled edges.

Taking her dress to new heights, Miss Clay showed off her dazzling pins in a slit that sliced highly through the dress.

As she moved through a set of sexy poses, the model risked all the outrageously high slit that crossed over her knicker line.

Complementing her evening dress, the 5ft 10in model opted for a matching tiny, black, designer bag and killer platform heels.

In contrast, the bombshell wore her red hot locks au natural, loosely around her shoulders and added clout with purple drop earrings.

Breaking free from the English Rose look, Victoria made quite a statement with her make-up.

Daring to be bold she painted her lips in bright red and outlined her baby blue eyes with a flick of eyeliner.

READY TO PARTY: Victoria Clay was joined by a whole host of fashionistas at the event (Pic: GETTY IMAGES)

PLAYFUL: Victoria Clay played up to the cameras as she left the red hot party (Pic: GETTY IMAGES) 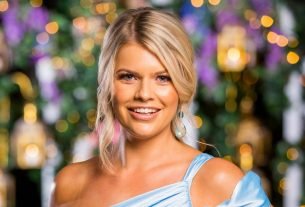