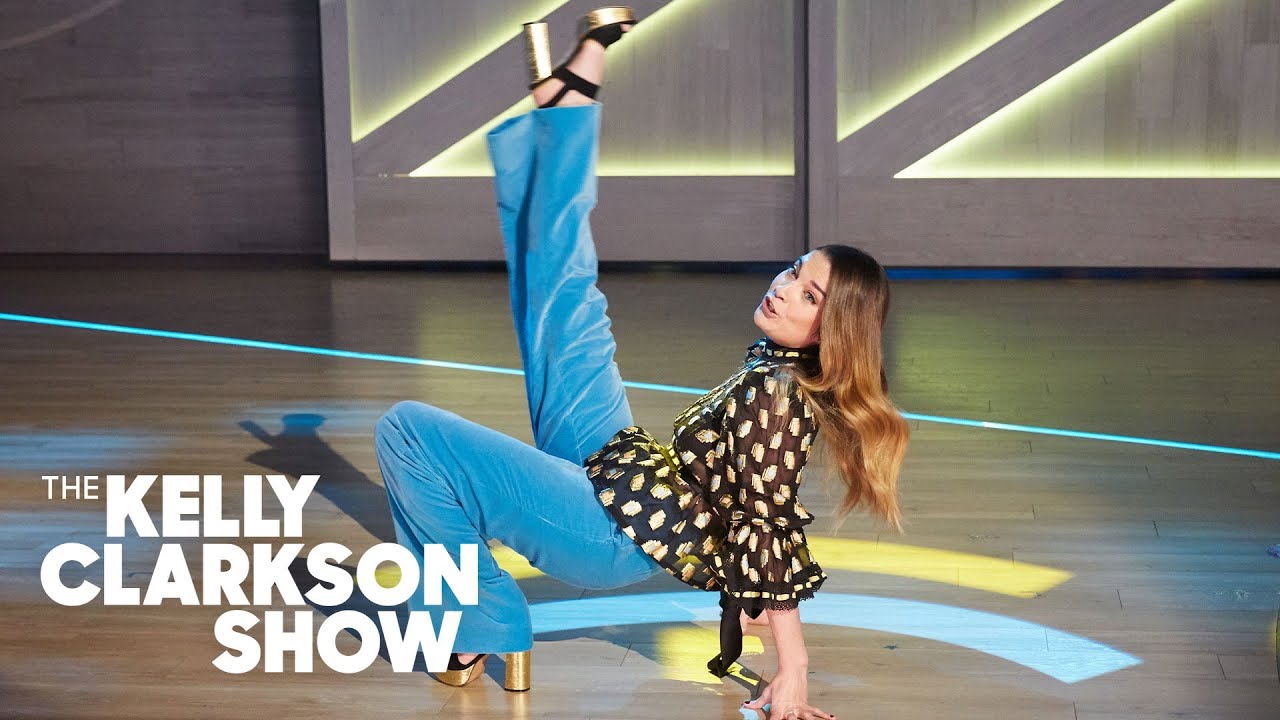 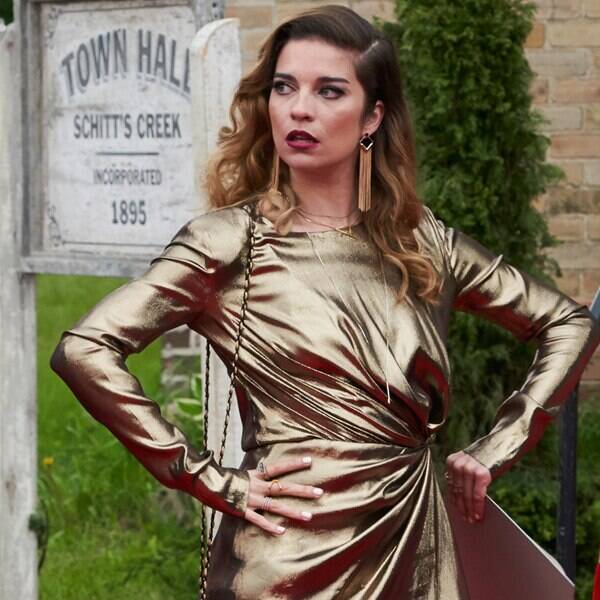 Annie Murphy remembers exactly where she was when her life changed. It all started when her phone lit up with the name “Eugene Levy.”

Three weeks before receiving that call, she had auditioned for the roles of Alexis Rose and Stevie Budd on Schitt’s Creek. As the days turned into weeks with still no word, Murphy said she was sure “that ship had sailed”—it didn’t help matters that she was already pretty down on her luck and doubting her choices. Then her phone rang, and she reacted in an unexpected way: “I was so scared that I didn’t pick up the phone,” Murphy told E! News. “I finally mustered up the courage to call back and it was Dan [Levy] on the other end.”

According to Murphy, Dan Levy really buried the lead in their conversation and started the call by thanking her for her time.

“And then, like 75 years of my life passed by and I was trying to find the words to be like, [mock crying] ‘Oh, it was a learning experience. Thank you so much for considering me,'” Murphy recalled. “And then he was like, ‘Just one more quick question: How would you like to play my sister on the show?’ And that was a truly, truly life-changing moment for me,” Murphy said. “I was standing outside of a friend’s house…in the rain and—it was like those words changed my life entirely.”

They most certainly did.

The series, created by father-son duo Eugene and Dan Levy, follows an incredibly wealthy family that lost everything, forcing them to relocate to Schitt’s Creek with nothing but each other and their designer wardrobe.

After settling into their new motel digs, the Rose family experienced something they hadn’t before: each other. Faced with no alternative but to experience life together on a budget, the characters evolved.

THE FAMILY ROSE
Schitt’s Creek is without question Murphy’s breakout role. And it’s easy to see why. Acting opposite two comedy icons, Eugene Levy and Catherine O’Hara, she’s never out of place. She fits right in, especially with her TV brother, played by Dan Levy.

“Dan and I…we didn’t know each other before the show at all. But we had this weird dynamic right out of the gate, and we connected so quickly, but also knew how to push each other’s buttons. It felt very, very sibling-y right out of the gate. And then with Eugene and Catherine…there wasn’t a moment—except for maybe the very first scene of the very first day of shooting—that I was like, ‘Oohh, I don’t belong here. This is terrible.’ And it was nice to have Dan there with me. Even though he was the showrunner, he was as inexperienced as I was when it came to acting. Like, he hadn’t done much either, so to have him kind of in the same boat as me and us going into it together, to try and hold our own with two of the greatest comedy legends of all time [Laughs.], that was nice. But it really did feel very, very quickly like family,” Murphy said.

After all those years together, Murphy’s TV family left quite the impact on her.

“I think it’s impossible not to go through such a big life change and not grow from it. I mean, I desperately deeply, deeply hope that I have absorbed something through osmosis through Catherine O’Hara, whatever magic she possesses, and Eugene Levy. Being able to go to work with two human beings like them every day is priceless experience. They’re so kind and so respectful and so fun and funny. I hope to kind of carry that on to new projects—and just to life in general. Just to be professional and kind, but to have a really freaking good time doing it.”

A LITTLE BIT ALEXIS
Like Murphy, her character was transformed by spending time in Schitt’s Creek.

Over the years, viewers watched as Alexis went from spoiled rich girl who lived quite an adventurous life—complete with Somali pirate hostage situations and dating Harry Styles—to a businesswoman with a burgeoning public relations firm. Taking Alexis on that journey and “finding her independence” was Murphy’s favorite arc.

“I feel like when we met her, she was so dependent on men and money and things and kind of so surrounded by these fickle relationships. That’s all she knew, so that’s who she was. But then she was uprooted and plunked into this Schitt’s Creek scenario, didn’t have the men and didn’t have the money, and found these new relationships that were so much more than skin-deep. And through that, I think found her drive and herself…I’m proud of the character in a sense that she’s living for her now.”

On the series, each Rose family member has their own quirks. Murphy’s Alexis has those “T. rex wrists” and a certain way of saying her brother’s name. In public, fans frequently approach Murphy to request she deliver her signature “Ew, David!,” a true testament to Murphy’s delivery, considering she believes she only said it twice over six seasons.

“It’s very funny because we realized, like a little while ago, that I only say ‘Ew, David!’ twice on the entire show. I say two ‘Ew, David!’ and I say one, ‘David, ew!’ and then all the rest are just me tacking ‘David’ on to ends of sentences or like, ‘Ugh, David!’ or ‘Yikes, David!’ or ‘Woof, David.’ But the actual ‘Ew!’ is rarely seen and heard, which I find very interesting,” Murphy said, going in and out of her signature Alexis cadence.

“Ew, David!” isn’t Murphy’s only pop culture contribution. She also co-wrote and performed “A Little Bit Alexis,” Alexis Rose’s theme song to a short-lived reality show. Since its debut in season five, the song has been streamed more than a million times. Murphy even performed a remix of the song with Kelly Clarkson on The Kelly Clarkson Show. “It’s so ridiculous,” Murphy laughed.

“And I thought she was going to be like, ‘So, I don’t have to play it if you’re uncomfortable,’ but she was like, ‘So, I will be playing it. I just want to let you know that that’s what’s happening if you want to leave or whatever.’ [Laughs.] And I was like, ‘I’m absolutely not leaving for this,'” Murphy recalled. “She put on ‘A Little Bit Alexis’ and the whole bar was dancing and singing, and just at that moment, my friend walked in to meet me. I had to be like, ‘I swear to God, I did not slip anyone a $ 50 bill, it’s just something very strange that’s happening right now.’ [Laughs.] And people know the lyrics! They’re making merch about it! It’s really far more than I had ever imagined.”

THE BITTERSWEET GOODBYE
Murphy wrapped work on the final season of Schitt’s Creek some time ago but she doesn’t feel like she’s quite said all of her goodbyes just yet. While Dan Levy revealed that Murphy didn’t cry much while filming the final shows, the experience of saying farewell has been on Murphy’s mind.

“Listen, I cried on my own terms in my own bathtub, OK? But not in front of Dan. It was really, really hard to say goodbye. And I think it won’t really, really sink in until we’re supposed to go back to shooting in March, you know? Because we’d technically be off now. So, I think when March rolls around, and there’s no job to go to, there’s no Schitt’s Creek to return to, it will sink in even more…but yeah, it was like five years of truly, truly good times and good friends. Most of the crew had been there since day one as well, so it was friends on both sides of the camera and a really, really special show. It is really hard to say goodbye,” she said.

So, how will Murphy cope with saying goodbye?

“I dance alone, nude, to ‘A Little Bit Alexis’ in my room every night,” Murphy laughed. “No, imagine if I was like, ‘Yeah, I lit all of her costumes on fire…’ No, I haven’t really. I don’t really want to say goodbye yet. And we’re still doing press and all that kind of thing, so I haven’t really had a significant moment of goodbye because it still feels like it’s going on to a certain degree. But I did take the ‘A Little Bit Alexis’ dress, that kind of ridiculous, purple velvet babydoll dress. So, maybe I will light that on fire and send it up to the heavens or something like that down the road.”

While saying goodbye to Schitt’s Creek is a process, Murphy is making moves for the future and has a new role lined up. She’s been cast as the lead in AMC’s Kevin Can F***Himself, a new comedy from Valerie Armstrong and executive producers Rashida Jones, Will McCormack and Craig DiGregorio. The series follows the secret life of a sitcom wife and asks what the world looks like from her eyes. The show will alternate between a multi-camera sitcom format and single-camera realism as it follows the sitcom wife taking lead of her own life.

“I think what Schitt’s Creek has taught me is that I kind of found my sweet spot in terms of acting. I love doing comedy, I love physical comedy, but I also really love comedy that lends itself to something that has a lot of parts to it and some drama to it,” Murphy said. “So, I think this is very different from Alexis. And I hope to god that my T. rex wrists will not come into this at all. I hope that I can do something really different [Laughs.], but, yeah, I’m super excited and a little bit terrified, but mostly very excited to start something new.”

The final season of Schitt’s Creek airs Tuesdays, 9 p.m. on Pop TV in the US and CBC in Canada. 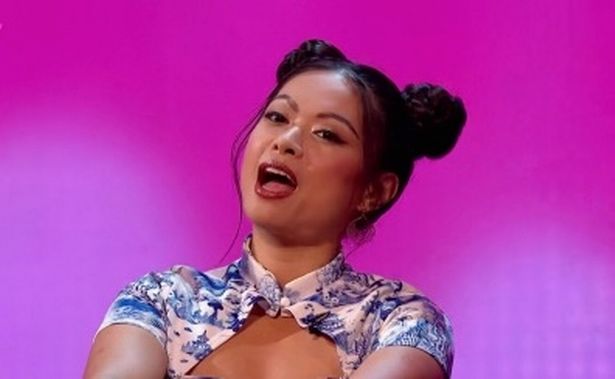