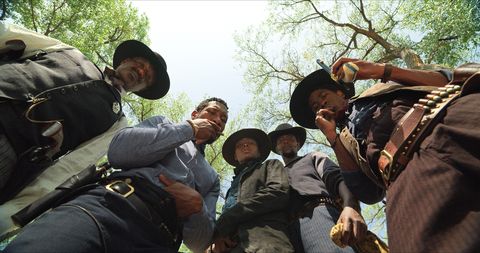 The Harder They Fall, Netflix’s all-Black Western blockbuster, may be filled with star actors from Regina King to Idris Elba, but you can’t take your eyes off Danielle Deadwyler. From her first scene as Cuffee, the mysterious doorman at Stagecoach Mary’s (Zazie Beetz) saloon, she gives an impressively vulnerable performance based on Cathay Williams, a frontier woman who served as a Buffalo Soldier in the United States Army while disguised as a man. Joining in on the Nat Love (Jonathan Majors) gang’s quest to take down Rufus Buck (Elba), Cuffee becomes the gang’s, and the film’s, secret weapon.

Though THTF is Deadwyler’s first blockbuster role, odds are you’ve seen the Atlanta native in one of your favorite shows. After coming up through the city’s theater and dance scene as a kid, the actor and performance artist has landed roles in several hit shows, including Tyler Perry’s The Haves and the Have Nots, Being Mary Jane, P-Valley, and Atlanta. Deadwyler tells ELLE.com that she’s glad that she’s appeared in shows that cover the entire spectrum of Black life in the city.

“I love everything about our cultural style and how we present. We have a beautiful spectrum,” she says. “I think it’s really glorious to see that all these things can coexist at the same time, and that even more can proliferate from that.”

In addition to acting, Deadwyler is also a prolific filmmaker and multidisciplinary performance artist, who has been featured in multiple film festivals and galleries all over her hometown. When asked how she balances the commercial world of Hollywood and her independent work, she says that “creation finds a way to balance [them] out.”

Deadwyler speaks to ELLE.com about cowboy boot camp, working with Regina King and Zazie Beetz, and her upcoming role on the HBO Max series Station Eleven.

How did you get your start in acting?

I was an Atlanta theater baby. [I trained at] Total Dance/Dancical Productions and Marlene Rounds School of Dance. These integral Black arts organizations were rooted in the development of my childhood arts backgrounds. I’ve just been a part of the theater community my entire life, and my sister was an actor and writer in the community. Dance and theater were really my thing. So it’s just always been there. I tried to do more academic things when I got to college, but everything about my rearing and my development as a young adult is centered in the arts and they just married with academia.

You’re involved in so many different things, including indie filmmaking and the art and theater worlds. Does it ever feel strange to balance all of that with the very commercial Hollywood machine?

No, it doesn’t. I feel like they’re balancing the wheel at the end of the day. It does strangely work. A lot of the things that I do are deeply intuitive and spiritual in nature. The roles that come to me and the things that I seek to do as a performance and multimedia artist are deeply spiritual and intuitive things. Creation finds a way to balance out where they lie and how the year or the schedule goals. I live very much in the thought of unknown dynamic and let it move so that, there can be this ecstatic, erotic surprise about how it plays out. I don’t pressure myself.

A lot of the things that I do are deeply intuitive and spiritual in nature.

How did you first get involved with The Harder They Fall?

I did the traditional route as anybody else. I audition for every single thing I do. I was going to do a smaller part, but then COVID did what it did. It shifted a lot of people’s schedules and I was able to garner this role and come in guns blazing. You hit cowboy camp and it’s not a game. You’re riding, shooting, and training for fighting. It’s hardcore.

I just thoroughly enjoy every quality of being a part of the making of this film. It was beautiful to understand the majestic nature of horses, and it’s so fun to test your spirit. In light of everything that’s going on with the challenges of guns on sets, you know, it was interesting to learn how to be responsible with weaponry, and how they navigated it at this time. I really enjoy watching RJ [Clyer, who played quickdraw Jim Beckwourth] prepare his insane skills, whipping the guns with his hands and his fingers. It’s some choreography to that, man.

Delroy Lindo as Bass Reeves, Jonathan Majors as Nat Love, Danielle Deadwyler as Cuffee, Edi Gathegi as Bill Pickett, and RJ Cyler as Jim Beckwourth in The Harder They Fall.

It’s interesting that you were on Watchmen [episodes 6 and 7] with Regina King and [the Drake episode] of Atlanta with Zazie Beetz. And now you’re the three female leads in this film.

Yeah. It’s crazy. On Watchmen I did work directly with Regina [in] all those memory scenes when she [was] embodying her grandfather. Then with Zazie, we were going to the club or whatever the heck we were doing on that episode. It’s a beautiful thing to be able to have trusted people because you have worked with them before. It’s just beautiful to have that camaraderie, because most of the time I was one of the guys.

Did you do any historical study on Cathay Williams, the historical figure who inspired Cuffee?

I had been doing a lot of research on Civil-War-era women soldiers for previous work that I was developing. It’s just apropos that the knowledge seamlessly crept into every inch of what I was able to develop during The Harder They Fall. I knew exactly what that dynamic was, specifically with Cathay and the greater knowledge that Black women were a part of the space, but they just weren’t recorded in the same way that white women who were trans in the Civil War era were. There are letters about white women’s experiences in choosing to live as men because it was something that they desired to do because that was their gender identity, to get away from family, or whatnot. This was a liberatory freedom practice for Black women and in thinking about it for Cathay, she wanted to access a particular kind of freedom. So I was able to take all that information and synthesize it with the liminal space of fiction and fact that we were riding with The Harder They Fall.

You’ve worked on a lot of Black-led productions or shows that came from a Black perspective, like Atlanta, P-Valley, The Haves and the Have Nots. How has it been with working on these productions?

I try not to think about it. I’m deeply present when I’m in these spaces, and you don’t know what will be of them. You don’t know how it’s going to be received. A mentor figure, Andrea Frye, has always told me to elevate everything I do. That’s the way that I engage others, and I feel like others bring that energy in, too.

I love Atlanta. I love everything about our cultural style and how we present. We have a beautiful spectrum. You just named everything: Donald Glover’s Atlanta, P-Valley, Tyler Perry. That’s the thing that people are reaching for. We should be able to see every dynamic of what it means to exist as a human being, not just as a Black human being. I think it’s really glorious to see that all these things can coexist at the same time, and that even more can proliferate from that. So I’m just super enthused when I’m on any set. I’m developing family in the way that we should be as human beings, you’re connecting to people, and that’s just how I roll.

Deadwyler in the upcoming Station Eleven on HBO Max.

What do you look for when it comes to roles? What themes do you want to explore in every part of your work, including the experimental performance projects?

I’m interested in people who are making their worlds the center. I’m interested in people who navigate edges and shadowy spaces, and learn to take the reins in removing enclosures from their own interiority. I’m interested in learning how to find more buoyancy for myself as a human being. I know that is something that is able to be drawn out in exploring other people’s lives and exploring characters who push the margins, disrupt gravity, find their own way of floating, their own flow. I can say yes or no to a project, but I feel like the things that come to me are divinely given. So that’s how I move with it.

I also wanted to talk about Station Eleven, which comes out next month. Who is your character, Miranda Carroll? What was the experience like doing a show about a plague during the pandemic, which still isn’t actually over?

It’s not, we’re still in it, and it’s exactly what you think it is. It is what the fuck is about to happen. That’s the question. We started in like January of 2020, so nothing’s quite happened yet, but the rumblings are there. [Miranda Carroll is] a central figure in the book. She’s a woman who has suffered an interesting amount of loss that she’s navigating through, [coming to an] understanding in the relationship that she gets in with Arthur [played by Gael García Bernal] and in the art that she is developing purely for herself. It’s not necessarily for anyone else’s consumption.

So, I’m in that head space and we’re figuring out the world and beginning filming. And then this COVID thing comes. Miranda’s a survivalist in a world that hasn’t yet had to deal with a pandemic of that nature. And then I’m a survivalist and I think that we have to be overly aware of what’s going on. My son was going to come to visit me in Chicago. I was like, no, you’re going to stay there. You always want to be prepared for the potential of going into a more raw existence. It’s down to the most fundamental things that you need in order to survive. That’s kind of where Miranda lives and where we were on the precipice of that.

Deadwyler’s Miranda Carroll is a “central figure” in Station Eleven.

So we kept working, but I’m still very present about what’s going on, how many people have died. The terror that is coming from the different doctors who were talking about it at the time, though nothing has truly popped off in America quite yet. I think I’m still in a space where I’m trying to figure it out. We’re all in this kind of clusterfuck surrealism of, “Did this really happen?” Oh yes, this did happen. These many people have died, five million people worldwide. In Station Eleven, it’s their understanding that 90 percent of the world dies, and they’re at a state of complete barrenness. In this series, the creativity and the love is pushing you towards a greater understanding of how we will navigate this world amongst those who are left and what we will carry with us. I think especially we’re seeing art and love will be a part of it. Because art has held everyone down throughout all of this shit in the last two years. The question is: Is the love holding people down? How are we treating each other? I think that’s still to be seen based on how the tension has moved in, specifically America. 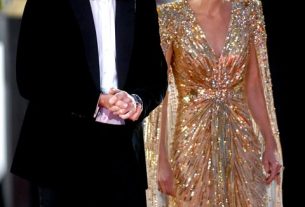 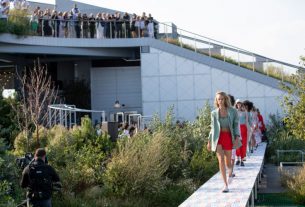