Paper Girls, one of the most successful comic book series of the last 10 years, is finally hitting the screen in the newly minted TV adaptation on Amazon Prime Video. When the streamer first announced it would adapt the graphic novel for television, I was skeptical. However, after speaking to the creators of the book, and ultimately watching the show, skeptics like me might be interested in giving the show a fair shot.

“This is a thing that started in our heads and now it’s out in the world,” Brian K. Vaughn, one of the co-creators of the comic, told ELLE.com at San Diego Comic Con last week. “Not to just be out there, but to be so good and to so faithfully capture what I thought could never be on TV. I didn’t think you would ever have four pre-adolescent female protagonists and a story of this scope with giant robots and a time war. It just feels like this is the kind of thing only comics can do and they proved us wrong.”

The original comic book series by Vaughn and Cliff Chiang follows four 12-year-old newspaper delivery girls from 1988: Erin Tieng, Tiffany Quilkin, MacKenzie “Mac” Coyle, and Karina “KJ” Brandman. The group gets caught up in a time war between the “Old-Timers,” the first generation to invent time travel and gatekeepers of preserving time, and the “Teenagers,” the descendants of the Old-Timers who live in the 71st century.

The Old-Timers seek to strictly follow the rules of time travel and keep history as it was. The Teenagers, however, believe in altering history and don’t mind a bit of rule-breaking. The Old-Timers prove to be formidable antagonists with outrageous methods: They kill people with dinosaurs, time travel on a zeppelin, and send some of the scariest and fiercest warrior cops after the girls to send them back home and lobotomize their brains so they don’t remember time traveling. (Yikes!) 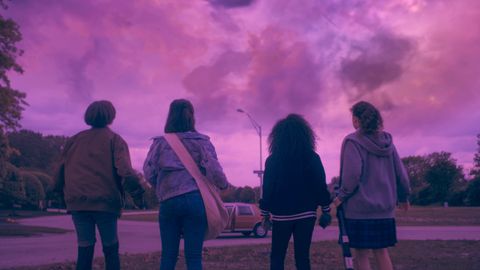 A scene from Paper Girls.

Paper Girls won two Eisner awards and was shortlisted for the prestigious Hugo award when it first debuted in 2016. In six short years, the 30-issue series has quickly become one of the most beloved comics on shelves today. What makes Paper Girls special is that in a sea of comic books that primarily focus on the male experience, it focuses on what it’s like to be a teenage girl going through changes—all while surviving and stopping a time war. The story explores girls’ sexuality in a way that is not exploitative, as well as friendship and first periods. When two of the characters, Tiffany and Erin, meet their adult selves, those relationships explore the idea of loving yourself and protecting your inner child. One of the greatest takeaways for readers is an understanding of how precious our lives are and that the messy parts are just as important and necessary as the successful ones.

While the comic book series has a lot of heart, there are some epic parts that would seem daunting to adapt for televisio­­n—like the out-of-this-world outfits, a fight between two giant water bears, or an apocalypse that involves soldiers riding dinosaurs. Did I mention that the main characters have clones, too?

Both the show and the comic begin the same exact way. The four girls are doing their job, delivering papers, on Nov. 1, otherwise known as Hell Day. Because it’s the day after Halloween, and kids are likely still pulling pranks, the girls decide to buddy up and stick together on their route. To cover more ground, they eventually split up into two groups, each half equipped with one walkie talkie. Suddenly, one of the girls’ walkie talkie is stolen by teens Naldo and Heck, time travelers collecting artifacts from the past and fighting in the time war. In trying to get their walkie talkie back, the girls not only find Heck and Naldo, but also their spaceship. After this point, the details start to differ between the comic series and the TV adaptation.

But to be fair, the TV show does keep a lot of epic factors from the comics. The adaptation does feature a time war, but the names of the sides have changed. Now the Old-Timers are “the Watch” and the Teenagers are the “STF Underground” (though the meaning of STF isn’t explained). Naldo and Heck are part of the latter group and are fleeing the Watch when they encounter the girls. And while the first episode of Paper Girls does not give a clear explanation of how time travel works, by episode seven the science is broken down: Basically, there are folds in time and one can get caught up in a fold, like a wormhole, and go to a different era. 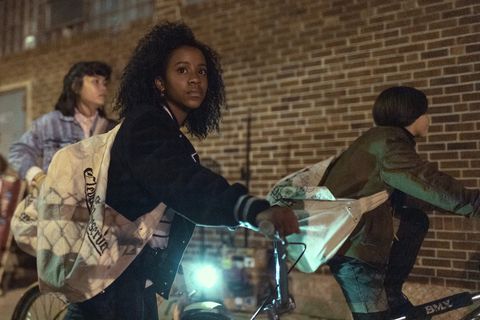 Understandably, there are parts that the showrunners and writers left out, probably because it would be way too expensive to recreate the multiple Kaiju-style fights, like the one between the water bears. The comics also have a really intense scene where all four girls end up in the Pleistocene era and meet the woman who invented time travel, but that storyline is not in the show at all.

Still, fans of the comic series will be happy to know that Vaughan and Chiang were executive producers and co-creators of the show. Plus, the writing and directing teams on the production were predominantly made up of women.

“In the show they had an all-female writing team and directors so that point of view comes through and I think that makes the show unlike anything else that’s out on TV now,” Chiang says.

The television show primarily focuses on Erin, Tiffany, Mac, and KJ; their relationship; and development between their kid selves and their adult selves. But this is only season 1, we might get clones and other larger-than-life fights if Paper Girls is renewed for season 2. Until then, we’re taking a deeper look at how the show compares to the comics below.

One of the key changes in the screen adaptation is the absence of the clones. In the comics, we get kid Erin, adult Erin, and clone Erin. The clones play an important role in the story because they help explain why the paper girls are special: When the girls first encountered Heck and Naldo’s spaceship, it encrypted their DNAs, making them—and anyone sharing their DNA—invisible to the Old-Timers.

There are multiple clones of Erin and there is one clone of KJ. We don’t see any clones of the other characters. 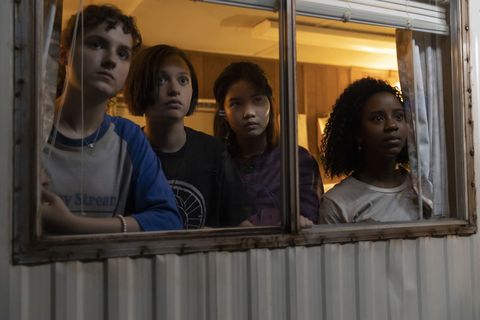 The biggest difference between the show and the comic series was the creation of a couple of new characters for the screen, like Larry and Juniper, members of STF Underground. Larry plays an important role in getting the girls to time travel a second time, explaining the STF Underground to them, and introducing them to those awesome mech suits.

The girls first meet Larry when they accidentally travel to 2019 and see him attempting to kidnap the adult version of Erin. He initially thinks Erin is part of the Watch because she has a certain electronic device that Naldo and Heck gave the paper girls, which the girls then gave to her.

When Erin asks what the electronic device is, Larry explains that it activates the mech suit (which he’s been hiding in a corn grain bin). Because the device is synced to adult Erin, she is the only one who can pilot it.

When another fold in time appears, Larry convinces Erin to navigate the mech suit, supposedly to 1988 to put the girls back in their original time, but he tricks them and actually gives Erin the coordinates to 1999.

Once they arrive in 1999, the Watch sends a giant mech to stop and capture the girls and Erin. Larry dies by being lasered to death by a giant mech. Don’t worry, we also meet the 1999 version of Larry, but he later gets eaten by a dinosaur.

None of what was just explained is in the comic book. But it works for this story. 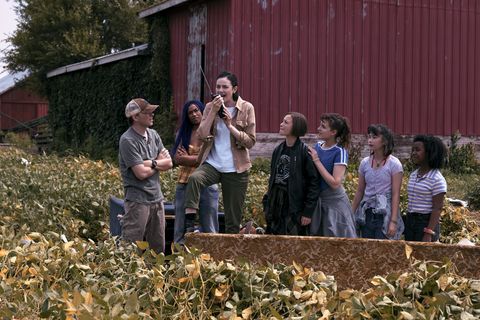 “There are some scenes that just break my heart and we were like, ‘Oh wow is this a missed opportunity?’ I wish we had done this in the comics. Every character that they added felt like they were organic to our story. They could have been in the comic; we just didn’t have the space for them,” Vaughn says.

Another big change was making Prioress, a group of warriors in the comics, one character instead of multiple. (In the comic books, many different characters go by that name.) In the show, Prioress is a sort of hound for the Watch. She chases the paper girls through time in the attempt to return them to their proper time and fix the timeline. Prioress desperately wants to end the time war, and her desire to do so becomes even stronger after she loses her brother.

“In the graphic novels there is a female captain and then Prioress comes along. In our TV show I play both,” actress Adina Porter says. “Prioress is the combination of a few female warriors in our TV show.”

In the show, Erin seems to have a lot more anxiety and has a strained relationship with her sister Missy, whereas in the comic book Missy is referred to as Erin’s “best friend.” The strain between the adult sisters bothers kid Erin and she attempts to talk sense into adult Erin to rekindle their bond. 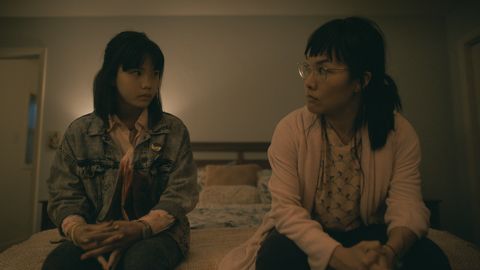 The adaptation also changes how Tiffany learns she’s adopted. In the comics, Tiffany knows she is adopted by a biracial couple. In the show, the truth of her adoption is revealed by her adult self.

Mac in both the comics and the show is supposed to die by age 16 of cancer. She never meets or sees a future version of herself. The show adds a completely new but touching storyline between her and her brother Dylan. He gives both the audience and Mac a sliver of hope that maybe they can catch her cancer early, but circumstances tear her away from a second chance at life. 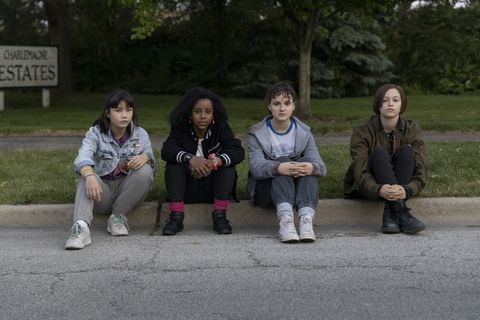 Behind the scenes of filming Paper Girls.

Even with these differences, the spirit and feeling of the original Paper Girls series are still captured in the show. All of the key elements are brought to life on the screen, but the TV series will still keep fans of the comics surprised.

For Russell Westbrook, the Met Gala Red Carpet Is Way More Intense Than the Pregame Tunnel 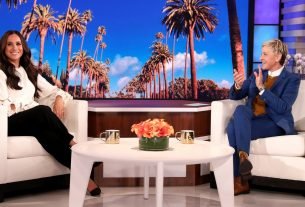 This Fall, It’s All About the Fashion Blanket