On November 4, musical artist Kanye West appeared on an episode of Revolt TV’s Drink Champs, and made some comments about his relationship with his ex, Kim Kardashian, that raised some eyebrows, E! News reports. Kardashian hosted Saturday Night Live in October, and during her opening monologue she referred to filing for divorce from West in January of this year. West told Drink Champs hosts that this was false and referred to her as his “wife.”

“SNL making my wife say ‘I divorced him’ because they just wanted to get that bar off,” he said. “And I ain’t never even seen the papers, we’re not even divorced.”

A source told E! that these comments aren’t surprising, though they are technically incorrect. Lawyers have outlined some of the divorce details and Kardashian was awarded the former couple’s Hidden Hills estate. The source stated that Kardashian knows West still hopes for reconciliation and that he “is still holding out hope and wishes they could still work it out,” but that there’s “no chance for reconciliation at this point.”

A second source told them, “She knows he has his feelings and doesn’t hold back on sharing them. Kanye has made it very clear he doesn’t want to get divorced and wants her to reconsider.”

But Kardashian did try “for a long, long time” and “reached her breaking point” this year.

They added, “Kanye is still hoping Kim changes her mind but she’s not interested in getting back together.”

On November 5, Page Six reported that West had unfollowed Kardashian on Instagram, so it’s possible that this week’s news that she is currently seeing Saturday Night Live star Pete Davidson finally got through to him. Kardashian and Davidson have had at least two date nights while she visited New York this week and apparently displayed “affection” with one another publicly while out. West only recently started following Kardashian again having wiped his follows list leading up to the release of his album Donda. It didn’t last long. 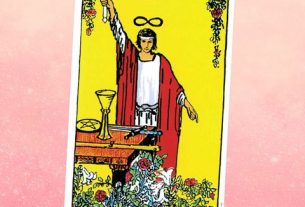 Your Weekly Tarot Card Reading, Based on Your Sign

Soccer Star Alex Morgan Is Pregnant With Her First Child

Lace shorts for men now exist – and if you’ve got it, flaunt it