There has been much speculation as to who will take over as James Bond when actor Daniel Craig, 50, steps down.

And the front-runner by a long mile appears to be Luther star Idris Elba, 45.

Far from shying away from the attention, the London-born talent took to Twitter this morning and added fuel to the fire.

Alongside a close-up picture of his face, Idris penned the captioned: “My name’s Elba. Idris Elba.”

Needless to say, the teasing update sparked frenzy among the actor’s 2.5 million followers.

In response to the post, one fan queried: “Does this mean what I think it means?”

While another quipped: “Ticket sales for women aged 18 to 74 for the James Bond movies just maxed out.”

Sharing their excitement, one female follower noted: “If you’re the next Bond, it’ll be the first Bond film I ever see.”

Eager to make things official, a straight-talking viewer remarked: “Please be 007. Don’t tease us like this. Get that contract signed.”

HOT TOPIC: Idris is the bookies’ favourite to take over from Daniel Craig

END OF AN ERA: Daniel Craig is expected to step down from the franchise next year

Talking to the Daily Star, director Antoine Fuqua, 52, said Barbara told him “it is time” for a black actor to take on the iconic role.

He divulged: “Idris could do it if he was in shape. You need a guy with a physically strong presence. Idris has that.”

Daniel Craig is expected to step down from the franchise next year, following the scheduled November 2019 release of Bond 25, directed by Danny Boyle, 61.

During an appearance on US talk show The Late Show with Stephen Colbert in 2017, the Brit actor teased his departure as he said he “wants to go out on a high”.

Harvey Weinstein Desperate to Clear His Name, Fires Off Emails to Media 'Friends' 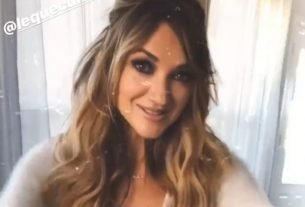