Despite his growing popularity with his fellow celebs, it seems that when it comes to romance, he’s not so popular.

While he’s busy in I’m A Celeb, TOWIE’s Pascal Craymer has admitted that the DIY SOS host went on a date with her.

The TV host has always found himself falling for younger women, with his ex-wife Jessica Rose Moor being 25 years his junior.

The 31-year-old TOWIE babe revealed she had dated Nick Knowles, 56, after his split from Jessica – but it didn’t go at all well.

“He was so forward I found it really off-putting”

Admitting that the date ended with her blocking his number, Pascal spilled all the details on their short-lived romance.

The brunette beauty told The Sun Online: “It was clear early on he only had one thing on his mind.

“He was so forward I found it really off-putting.”

She explained how he tried to sneak a smooch almost instantly, adding: “He is creepier than a creepy-crawly.”

NO MORE: Pascal decided to call it quits (Pic: INSTAGRAM)

Although the babe explained the date itself was incredible, she admitted that it was also one of the worst she ever had.

She added: “He also made jokes about owning a revolving, circular bed with leopardskin sheets.

“He kept making sexual innuendos about everything. It was obvious what he wanted, it was really off-putting.”

After seeing him on a flurry of dates with other women, the brunette babe decided to ditch the I’m A Celeb star.

JUNGLE: Nick is now in the jungle and back in the public eye (Pic: GETTY)

Nick had previously admitted countless times that he was dating after his split with his ex wife.

The presenter stepped out from the public eye for a short amount of time, after feeling low following his breakup.

He’s now had a defiant return, and is proving to win over the public during his stint in the jungle. 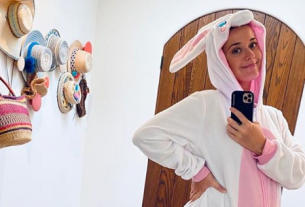