Former I’m A Celeb champs and Extra Camp hosts Scarlett Moffatt and Joe Swash have both announced their exits from the show.

Joe won the ITV series in 2008 and joined the presenting team of its sister show from 2009, hosting with the likes of Caroline Flack, Russell Kane and girlfriend Stacey Solomon among others.

Scarlett was crowed Queen of the Jungle in 2016 and became a presenter on Extra Camp in 2017.

Taking to Instagram, Joe shared a picture of him with the jungle crown and sceptre, announcing his departure.

The new dad wrote: “I can’t believe I’m about to say this… For 10 incredible years I’ve been lucky enough to host my favourite show on telly.

“Being a part of the I’m a Celebrity After Show has been everything I could have dreamed of and more.

“But I’ve come to the decision that this year I’m going to have to leave my jungle family and stay home with my wonderful real family.

“I don’t want to miss a second with Stacey and our amazing boy so three months in Australia just seems too much to bear this year.

“I’m so grateful for everything the jungle has given me and for all of the people who have took me under their wing and given me memories to last a lifetime.”

He went on to thank hosts Ant McPartlin and Declan Donnelly “for showing [him] how it’s done and keeping [him] on his toes”.

Joe finished: “Signing off for now and all I have left to say is… ‘Olly, Olly, Olly, t*ts in the trolley, balls in a biscuit tin. Sitting on the grass, with your finger up your a***, playing with your ding a ling a ling.”

Meanwhile, Scarlett shared her own snap, writing: “For three years I have enjoyed a jungle life, being crowned Queen of the Jungle and having the greatest time presenting Extra Camp with Swash and Joel who I now class as best friends.

“The jungle absolutely changed my life and I am massively grateful to everybody who voted for me whilst in the jungle and for your constant support to date and everybody who tuned in to Extra Camp.”

She went on to thank the team behind the scenes and in front of the camera, before announcing her departure.

Scarlett wrote: “I have got a project that I’ve been working on (alongside my family) that I am very very excited to announce soon.

“And because of this unfortunately I will not be presenting this year’s Extra Camp but I will certainly be tuning in.”

Comedian Joel Dommett has so far stayed quiet on his involvement in this year’s series, but commented “love ya” on Scarlett’s post. 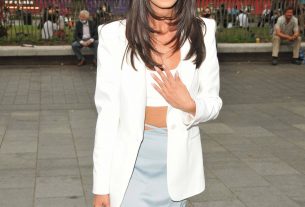