I’m A Celeb’s Iain Lee claimed that he was at the centre of a brutal attack undertaken by… an owl.

The comedian/radio host said that he was left with a bleeding head wound that had to be “glued” back together.

Taking to his official Twitter page Iain wrote: “Sorry guys. Not sure I’ll be able to do the show tonight.

“This is the weirdest thing but… I’ve just been attacked viciously. By an owl.

NOT A HOOT: Iain Lee claimed to be attacked by an owl

“It sounds like a joke but it’s not. Just sitting in A&E with blood everywhere.”

But every inch the consulate professional, the 45-year-old managed to make it to his 10pm-1am slot on talkRADIO.

Sharing a snap with his 97.5K followers, Iain gave a somewhat subdued thumbs up as he sat in a wheelchair with a bandage wrapped around his head.

Writing alongside the pic, Ian divulged: “Ok. The doctors here are incredible. I’ve had a tetanus and a few other injections.

“They GLUED the scratches on my head back together with GLUE. I’m woozy and in shock but fingers crossed I’ll be on air tonight at 10 on talkRADIO.”

Reassuring fans that he got to his radio show in the nick of time, Iain shared the live video feed on his Twitter page.

BACK TO BUSINESS: Iain Lee made it to his talkRADIO show

Addressing the attack, Iain said: “So I don’t want to go into too much detail because I don’t want the whole of my first show back in a week to be about this owl, right.

“And also, can I stress, I don’t want any of my fans to do revenge attacks on birds, and I’m certainly not down on the whole bird community.”

It’s been an unlucky year for Iain in the injury stakes, as he admitted that he fell down a well while trying to get his coin back.

Wishing you a speedy recovery Iain! 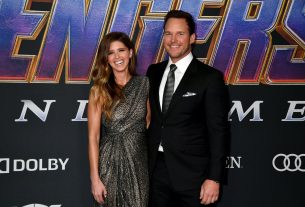 Katherine Schwarzenegger and Chris Pratt Have Welcomed Their First Child Together!