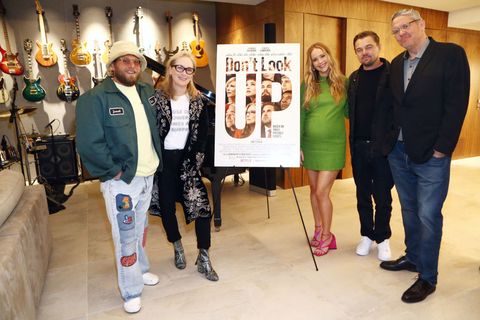 On November 17, Jennifer Lawrence attended Netflix’s Don’t Look Up LA Tastemaker Screening at Ross House in Los Angeles, California, wearing a bright green mini dress for maternity wear, featuring long sleeves and a mock turtle neck. Her long blonde hair was left down, waving over her shoulders, and on her feet were a pair of strappy, pink shoes with wide heels.

Lawrence was interviewed that same evening in front of a crowd of BAFTA voters, Variety reports, and was joined on stage by Leonardo DiCaprio, Meryl Streep, and director, writer and producer Adam McKay after a screening of the film. The movie was co-written by Taura Stinson, Ariana Grande and Scott Mescudi, better known as Kid Cudi. The latter two also have roles in the film, and Lawrence claims she completely “fangirled” over meeting Grande.

“She can’t make bad music,” she gushed. “I’ve since reflected on my behavior with Ariana Grande. I went full radio contest winner. I was so excited and nervous that at one point, I just kind of walked into her hotel room and sat down. I’ve just been thinking about it a lot lately. There were all of these trunks for her hair and makeup, and I was like, ‘Do you live here?’”

The actress is currently expecting her first baby with her husband Cooke Maroney. Her pregnancy was confirmed in September, and a source told People at the time that she was “looking forward” to being a mom.

“Jen wanted a family for a long time and found an ideal mate whom she loves, respects and enjoys being around,” the source said. “She loves married life, and they have a solid foundation for a baby. She is very happy and looking forward to being a mom…She loves her work and that will continue. Like other actors, she will balance her career and her life as a wife and mom. She will do it well. Jen is grounded and ready to be a parent because she loves family life.”

See the Wild Style Trends Coachella Is Known For, From Flower Crowns to Bondage Fashion

Rag & Bone Flash Sale: Upgrade Your Fall Wardrobe With 65% Off