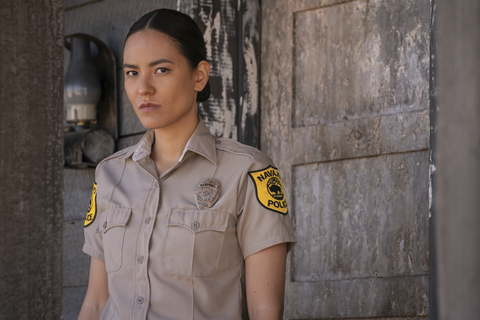 When Jessica Matten sits down at a bustling Mediterranean coffee shop in Midtown, she passes me a bundle of sage by way of welcome. “I know,” she says, hiding neither her wince nor her smile. “I’m so traditional.”

She’s here with a game plan, an ulterior motive, one that’s neither malicious nor well-hidden. If the Dark Winds star is to accomplish even half of the long list of goals she’s set for her career, she’s going to need to reach a lot of people, fast. In theory, speaking to the press should be a good way to do that. And she’s genuinely happy to answer intimate questions about her childhood, her parents, the 26 different homes she’d lived in by the time she turned 21. She only remains precious about her age; she’d like that detail off-the-record. She’ll allow no one to set the clock for her.

“I do have a motive,” she reveals midway through our conversation. “I do. It’s—I want to be the first Native superhero. I do. Straight up.”

Currently, Matten, an Indigenous actress of Red River Metis-Cree and Chinese descent, is playing undoubtedly one of the best characters in the excellent new AMC series Dark Winds, which was just renewed for a second season. Set in the 1970s-era Navajo Nation and adapted from Tony Hillerman’s novels, the show follows tribal police officers Joe Leaphorn (Zahn McClarnon) and Jim Chee (Kiowa Gordon), as well as Matten’s Bernadette Manuelito, charged with investigating a double homicide and the strange events surrounding it. Show creator Graham Roland and executive producers Robert Redford and George R.R. Martin infuse the drama with a soulful tension and a real sense of place, but it’s the actors who make Dark Winds feel grounded beyond its trappings. Matten, with her hair slicked back in Bernadette’s signature bun, is both tough and endearing, a no-frills workhorse who still respects her own spirituality when a colleague does not. In person, Matten’s edges are smoothed over, her hair gently draping her face as she picks up a bottle of green juice, but Bernadette’s sense of purpose is all there behind the actress’s eyes.

It’s not difficult to understand why Martin took such a quick liking to Matten on the set of Dark Winds. After a less-than-stellar first impression—Matten let it slip that she’d read neither the Dark Winds books nor Martin’s own Game of Thrones series—the two discovered a communal appreciation of ferocious female characters. Soon enough, she was sharing margaritas with the author on his patio, chiding him for drinking too much sugar. “Everyone knows we get together and I go, ‘George…’ and he goes—” Matten raises her eyebrows. “And then we start swearing like pirate hookers together.”

Born in Canada, Matten bounced around throughout the country for most of her young life, spending numerous years on numerous Indigenous reserves but also living overseas, including in Hong Kong and Korea. “I never thought I was going to be an actor, but my mother, you know, she was a mother on welfare and she wanted to educate her children through cinema,” Matten says. “So we weren’t allowed to watch cartoons. None of that.” Instead, she and her brother subsided on a steady diet of classic film and television from the likes of Sidney Poitier, Katherine Hepburn, Charlie Chaplin, and Buster Keaton. (She watched the entirety of Roots when she was around the age of seven.) By the time she reached her teen years, Matten understood the power entertainment held over a community’s conception of another culture, and she understood just as readily how such stereotypes had perpetuated the generations of trauma suffered by her own people.

According to the “Hollywood Diversity Report” released by the University of California Los Angeles in 2020, Indigenous men claimed 0.5 percent of all “top film roles” in 2019; no Native women landed any of these roles, nor did any Native directors helm these projects. Outside of Hollywood, this lack of representation exacerbates an already dire situation: For centuries in North America, Indigenous communities have been routinely marginalized, leading to extremely high rates of poverty, sickness, suicide, and domestic violence when compared to non-Hispanic white communities.

Matten figured, if she wanted to make a difference in Native lives, she’d need to change perceptions nationally, if not globally. Working with her mother, she’d do some modeling and, someday, become a CEO at an advertising firm. Or, perhaps, she’d work for a magazine. (While in London as a 21-year-old, she mailed numerous editors at ELLE UK a postcard with an example of her modeling work, with which she wore the staff down until they finally brought her on in the fashion closet.) When the late-aughts recession rolled around, she Googled the biggest industries in Vancouver and discovered a prominent film business. She then Googled, “how to become an actor.”

Although she graduated from the University of Alberta with a human ecology degree, Matten’s work has never settled into a neat, singular category. As a young adult, she assisted her divorced parents, modeling with her mother and running a business alongside her father while also working in high-risk Native group homes. Today, beyond acting, she runs an Indigenous fitness and wellness company, a production company, and an Indigenous film academy. She’s just flown to New York City for our interview, and she reveals it was her 25th flight of the year since January. Matten is kinetic, a gathering storm cloud restrained only by a seemingly bottomless resolve.

“I didn’t realize, my entire life, I’ve kind of already been in the business,” she says. “Because, as an actor, it’s kind of like the circus, right? We live out of our suitcases for the next job, whatever country or city you have to shoot in. So it was kind of weird how that’s been my life.” She adds that, not only did her childhood take her from one town to the next, but also through different tax brackets. Matten went from “digging in dumpster cans at 11 years old for furniture” to, at 17, setting up a building company with her father, “and he did extremely well, very, very quickly,” she says, Suddenly, “it was like this whole other lifestyle.”

After starring in a series of shorts and guest roles, including as the lead in Elle-Máijá Tailfeathers’s short film, A Red Girl’s Reasoning, Matten hit her stride in the Jason Momoa-led Apple TV+ series Frontier, and as star and associate producer for the Canadian television drama Tribal. But Dark Winds is her most prominent and well-received role to date, and there’s little doubt it could serve as a catalyst on her superhero campaign.

Right, that: the game plan. The, as Matten puts it, “Dr. Evil scheme.” She swears her goal of leading a Marvel or DC film—and, mind you, she wants it to be Marvel or DC—isn’t about vanity, though her case wouldn’t be less legitimate even if it were. She believes she needs this role, only for the floodgates it would open. It’s not about personal preference; it’s just smart politics.

“The reason I say Marvel and superheroes…” Matten starts. “You know how the media has changed. It’s like, [the comic-book genre] is one of the most impactful genres these days. In my opinion, Marvel and DC [are] the satellites to the entire world. For whatever reason, that has become a thing. And, you know, do I prefer indie films and all that? Yeah. But I really admire and respect how those two studios have been able to really launch careers for many, many people.”

But Matten doesn’t want to play just any Native superhero shooting pixie dust out of her palms. She wants to star in a film like the latest Batman—something gritty and grounded, “something that’s true and realistic to Native culture, being a Native woman,” she says. “Because the reality is, as Native women, the circumstances we go through on a regular basis are hard. Five times, 10 times more tough than what, like, an average person goes through.”

“The reality is, as Native women, the circumstances we go through on a regular basis are hard.”

And she isn’t afraid to put this desire out into the universe, both from a spiritual and a practical perspective. She believes in old-school manifesting. She also believes in the power of the insular media world, the power of dropping juicy information to a group of capital-hungry move-makers in Hollywood. She’ll use the system if she needs to, so long as it gets her one step closer to helping her people.

“I’ve hit a point in my life where I’m okay to just say it out loud, because you can say these things with humility and compassion and humbleness,” Matten says. “But I also feel, as a woman, we don’t got time to be the nice, placating…Be quiet about it.” She adds, “You need to be okay with saying what you want. And I want [to lead a superhero film] because, again, the ripple effect is—it impacts my community deeply. And it also gives me the platform to get the right partners to partner with me and help me get the resources that our people really, really need.”

She’s already got the training down; Matten does most of her own stunts and combat fighting. Now she just needs Hollywood to see her. She already has contacts at Marvel, strings she’s weaving between her fingers. But Dark Winds is the first one she’ll pull for now, a well-crafted series with a sophomore season on its docket and a largely Indigenous team orchestrating its magic both on-camera and behind the scenes. She’s made contacts here, too, including Roland and Redford and Martin and director Chris Eyre, all of whom saw Matten’s work as Bernadette and expanded the role to fit her magnanimity.

And in moments of pain, when the immense weight of just how much change she wants to make overwhelms her, she turns to her medicine woman. “I have my medicine woman who’s very dear to me, close to me, who uplifts me,” she says. “But also, I don’t know. Sometimes I feel like I’m connected to a switchboard, if that makes sense. It’s just like—I find the energy, through moments of pure exhaustion.” Matten’s only on step 2 of a 10-step plan. But no one need worry. She still believes.