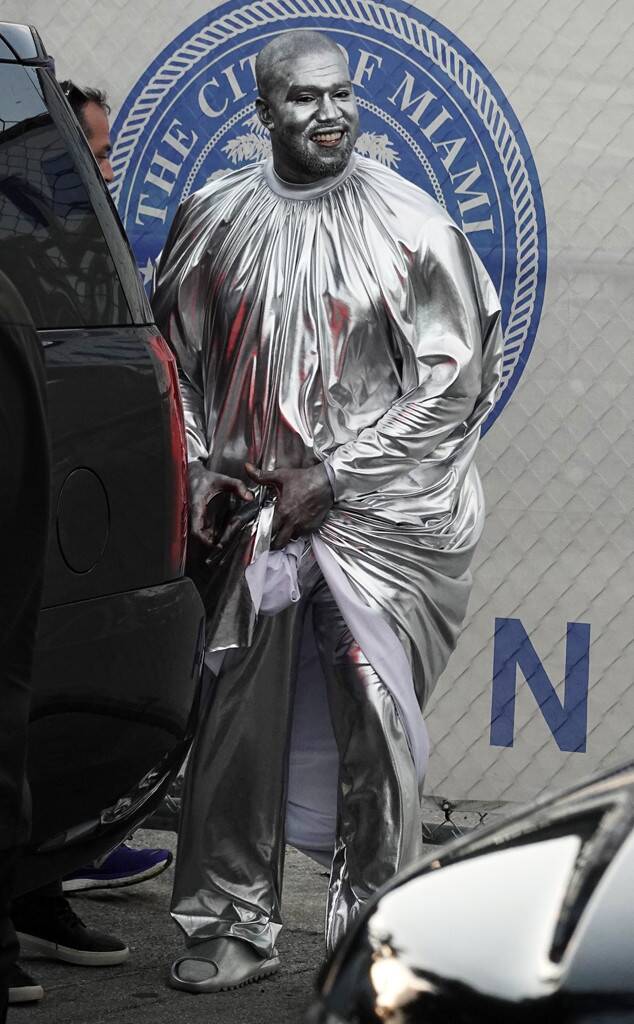 Kanye West knows how to make an entrance.

On Sunday night, the 42-year-old star stepped out in Miami to debut his Mary opera at the Marine Stadium in—wait for it—silver paint that covered his entire face. That’s right, Ye took his onstage outfit to a whole other level as he literally was dripping in silver from head-to-toe.

While it’s unclear why he chose to paint his face silver and wear an all-silver metallic ensemble, it’s safe to say it’s going to be one unforgettable lewk.

Kanye’s flashy and almighty outfit comes a few weeks after he called himself the “greatest artist that God has ever created.”

“Now, the greatest artist that God has ever exist- uh, created is now working for Him,” Ye said during his appearance at Joel Osteen’s service, as seen in a video posted by TMZ.

Of course, the 42-year-old star’s latest album is also centered around gospel. Jesus Is King dropped earlier this year and debuted at No. 1 on Billboard’s 200 Albums Chart.

And on Thanksgiving, the musician surprised fans with an epic music video that featured family, including his wife, Kim Kardashian‘s famous relatives.

The SKIMS founder starred in the video, “Closed on Sunday, alongside her kids, North, Saint, Chicago and Psalm West. More exciting, though? Kris Jenner made a special appearance and even got dolled up for her music video cameo.

Additionally, Kourtney Kardashian and her children, Mason, Penelope and Reign Disick, joined in on the fun for Kanye’s video.

From the Jesus Is King singer’s latest outfit to his gospel awakening, we can’t wait to see what he surprises us with next.

Watch a brand new episode of Keeping Up With the Kardashians Sunday at 9 p.m., only on E!

Boho Dresses on Sale Now–Just in Time for Coachella

Splurge Your Tax Refund on These Designer Bags & Shoes