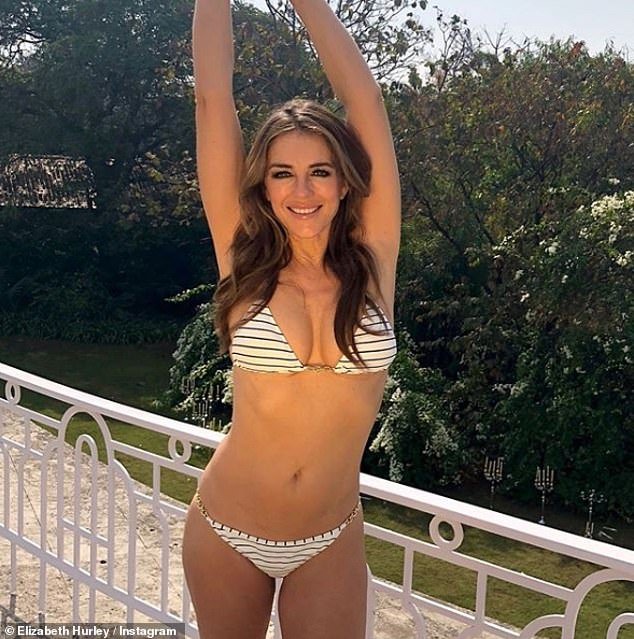 The busty brunette stunner appears to have traded in her endless show-stopping collection of glamorous outfits for some seriously skimpy bikinis in recent months.

Since releasing her own self-titled swimwear range, Liz Hurley has proven to be her own best advertisement when it comes to showcasing her itsy bitsy designs.

And it was business as usual for the 53-year-old model on Monday, as she squeezed those incredible curves into yet another eye-boggling number.

Taking to her official Instagram account, the Austin Powers actress looked every inch the goddess as she posed up a storm in a slinky blue one-piece.

The yummy-mummy-of-one put her sensational bod on full show, most noticeably those famous assets which have become something of a British institution in recent years.

Ever the glamour puss, the beauty – who enjoyed a high profile romance with fellow Hollywood star, Hugh Grant – donned a full face of make-up, going for a thick winged eyeliner and a soft nude lipgloss along with a dewy foundation.

Meanwhile, Liz wore her noticeably lighter caramel locks in a sleek down ‘do, letting her volumized tresses fall onto her shoulders and frame her striking face.

She captioned the saucy snap: “The most flattering one piece, the Candace, is now in stock @elizabethhurleybeach.”

And it goes without saying that our Liz soon found herself inundated with comments from her whopping 1 million Instagram following, who appeared to very much enjoy the risqué display – as did we, we must say.

One user wrote: “My God, you are so beautiful and youthful.”

And a third admirer told the star: “A flour sack would look flattering on you.”

While a final fan brazenly added: “We should date.”

And after that smokin’ hot display, let’s hope there’s plenty more where that came from!

Although, we’re pretty sure that our Liz has no plans of slowing down just yet, thank goodness.

R. Kelly’s Ex-Wife Has No Problems With His $22k Club Appearance