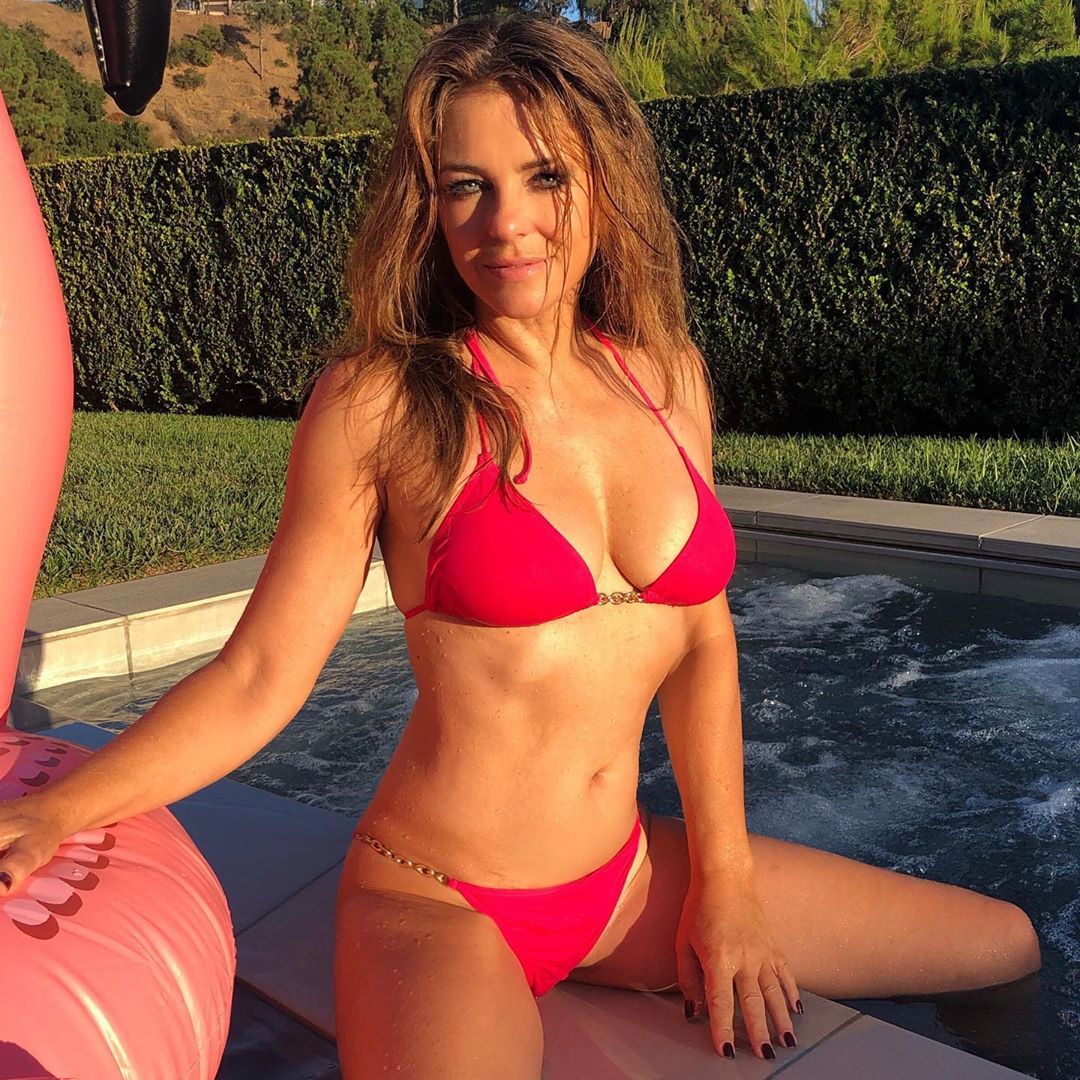 She can often be found parading her sensational physique in an array of her very own skimpy swimwear pieces on social media.

And with UK temperatures soaring this weekend, it comes as no surprise that The Royals star decided to strip down into her tiniest bikini yet whilst… walking her dog.

Dressed in a daringly low-cut and tight-fitting red number, the 52-year-old looked incredible as she gave her 953k Instagram fans an eyeful of her voluptuous cleavage which looked like it might burst out of her tiny top at any moment.

The gorgeous actress appeared in high spirits as she waved he hands in the air whilst her adorable pup looked on.

BOOB-BARING: Liz Hurley put on a boob-baring display this week

Ever the glamour-puss, Liz donned a full-face of make-up for the outdoors snap, opting for winged eyeliner with lashings of mascara, whilst her hair was styled into a tousled down do.

She captioned the snap: “Joyful dog walk”, followed by a love heart emoji and a Brit flag emoji, most likely in reference to the recent Royal Wedding.

Naturally the brunette bombshell was soon inundated with hundreds of compliments from her fans.

A second said: “Absolutely stunning if you don’t mind saying.”

A third joked: “No wonder the dogs tongue is out! Wow.”

Whilst a fourth chimed: “My tongues out just like the dog!”

However not everyone was quite so impressed with the star’s latest bikini instalment.

One user commented: “Who walks their dog in a bikini waving their hands above their head??? Only you I suspect.”

Whist a second exclaimed: “Will you put your boobs away woman, every post boob boob boob! Yes you have an awesome pair we get it.”

The actress recently came under fire from fans after admitting she get’s her 16-year-old son Damian to take many of her swimwear photos, something he was apparently “embarrassed” to do.

However speaking to The Telegraph’s Stella Magazine, Liz revealed the reports were “absolutely rubbish.”

She said: “He chooses clothes for me. He’s my stylist.

“I will rope in anyone to take a picture, and my son happens to be a very good photographer.”

Everything But The Everything Drops “In Love… Again” feat. Golden Plates