A series of photos show the seven blokes and five women who will be entering the villa from June 3.

As none of the ITV2 stars have been formally introduced yet, they’ve had to make a good first impression by getting glammed up.

Many of the ladies impressed by rocking some of the biggest swimwear trends of the year.

So which of the crazes feature in the promotional snaps?

Anna Vakili has been dubbed the “British Kim Kardashian”.

And when looking at her stunning pictures, it’s not hard to see why.

The 28-year-old dazzled in a low-cut cossie, which worked to emphasise her curves.

As well as playing into the plunging swimsuit trend, it was reminiscent of some of the “dental floss” garments we’ve seen on the market recently.

PASSION FOR FASHION: Similar looks have been worn by Vicky Pattison and Zara McDermott (Pic: INSTAGRAM)

Neon swimwear is all the rage this year.

The likes of Vicky Pattison, Gemma Collins and Zara McDermott have tried the daring trend.

And now, Love Island babe Amber Gill has given it a go.

In promotional pictures, the Geordie Beauty Therapist struck a post in a lime green bikini.

Her bottoms featured criss-cross detailing, which highlighted her hourglass figure.

Silver jewellery and a splash of white nail polish completed the eye-popping get-up.

SUITS YOU: Yewande Bial pulled off the brakini craze with style (Pic: ITV2)

Celebrities have found a clever way to make their curves look better on holiday.

Many are opting for “brakinis” instead of traditional swimsuits, which gives them a cleavage-enhancing looks.

Reality stars – including Love Island alumni and Instagram models – are among those to try the trend.

And now, ITV2 Bombshell Yewande Bial has shown off a bra-kini.

The Dublin-based scientist, 23, donned a bikini that perfectly framed her cleavage.

Opting for a neon and leopard print design has also helped her to stand-out from the crowd.

Underboob-baring cossies continue to be popular among celebrities.

For this reason, it should come as no surprise that Love Island star Amy Hart has been spotted wearing one.

The blonde beauty wore a bright blue bikini with peek-a-boob slits at the front.

She paired the daring get-up with hoop earrings and delicate rings.

A pair of sky-high sandals completed the jaw-dropping ensemble with a flourish.

The swimwear is unique because of its strap designs.

Instead of tying at the sides, the cossies fasten with buckles.

ITV2 contestant Lucie Donlan opted for this trendy design when she posed for Love Island photographers.

Her pink one-piece was vamped up with a chunky black belt and exposed zip.

The garment’s dark colour blocking and collar details also gave it an edge.

SUITS YOU: The racy swimwear features buckles instead of straps (Pic: FASHIONNOVA)

Love Island makes its return on June 3 at 9pm.

And if last year’s series is anything to go by, it’ll go off with a bang.

The 2019 instalment was the biggest yet, serving up eight weeks of telly gold.

A whopping 3.6 million people watched the finale on ITV2, helping the channel reach its biggest ever audience.

Get On the Ball for Tight, Toned Abs 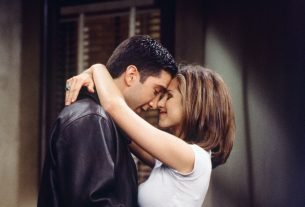 No, Jennifer Aniston and David Schwimmer Likely Aren’t Dating — But We Kinda Wish They Were