The Love Island bombshell wowed fans as she shared a sizzling new bikini snap on her Instagram page.

The blonde, who dates musician Tom Zanetti, was seen posing in the minuscule number as she took a dip in a swimming pool.

Hayley pouted at the camera as she let her curves do the talking.

Meanwhile, she finished off the outfit with some dark oversized sunnies and a simple silver necklace.

The star’s tresses were also looking glamorous as they were styled poker straight.

Fans were loving the reveal, with it racking up more than 15,000 likes in less than an hour.

One gushed: “You are hot,” while another exclaimed: “Wow, you look amazing.”

Hayley also took to her Instagram story feature to show off her bikini bod.

She was also seen holding hands with boyfriend Tom, 29, who she is on the trip with.

The sizzling snaps come after Hayley posed naked for a new campaign this week.

She rocked long pinks locks and covered her modesty with just a sheet for wig brand Hair Arvina.

It may be cold outside, but all these reveals are causing a heatwave. 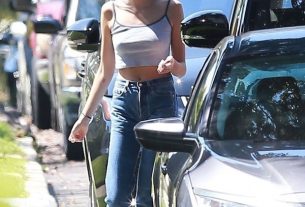