The Love Island babe got off to a rocky start on the ITV2 show, attracting attention for all the wrong reasons when she seemingly flitted between guys.

But Megan Barton-Hanson, 24, emerged victorious, earning herself a spot in the final with her now-official boyfriend Wes Nelson, 20.

The pair have been inseparable since the series ended last month, much to the delight of their growing fanbase.

Throughout her appearance on the show, Megan’s appearance was a hot topic, with the rising starlet stunning viewers with her candid plastic surgery admissions.

And the buxom blonde has got people talking about her image once more, as she’s dramatically changed her look yet again.

Taking to her official Instagram profile, the glamour model posted a short clip of herself having her newly-added long hair extensions braided.

Sitting down as a hairstylist got to work, the Love Island babe debuted a strikingly different look to the short, shoulder-length locks fans have come to recognise her for.

There was a special reason behind Megan’s new look, as she revealed she was getting ready to attend Reading and Leeds Festival.

Captioning the behind-the-scenes footage for her 1.7 million followers, she wrote: “Reading festival prep,” alongside a peace symbol.

This isn’t the first time Megan has transformed her image since leaving the dating show which made her famous.

BRAIDS FOR DAYS: The starlet’s supportive boyfriend Wes Nelson was on-hand for the hair day

“Your past doesn’t dictate your future”

The buxom beauty underwent a dramatic make-under for a cover photoshoot with Grazia magazine.

As well as laying bare her fresh-faced beauty in the shoot, Megan also spoke passionately about not allowing her past to hold her back.

Sharing her photoshoot story on Instagram, she wrote: “So proud to be on the cover of Grazia.

“I hope that my little journey shows that anything is possible. Your past doesn’t dictate your future.

SIGNATURE STYLE? Megan often plaited her shoulder-length locks during her time on the show

STRIPPED BACK: Megan dramatically changed her look for a chic cover story with Grazia

“For so long I placed a ceiling on myself, my self doubt convincing me that I wasn’t enough, that I couldn’t be who I dreamed of being.

“I can genuinely say that I have left the villa believing that I can. I can do it and I will.”

The starlet said: “It’s in my past, I’ve admitted I was a dancer, I’d done glamour modelling. I don’t judge any woman that does that…

“It’s just a small part of my life, it was in the past. Love Island has changed me, I’ve come out a stronger, more confident person, so it’s time to move forward.” 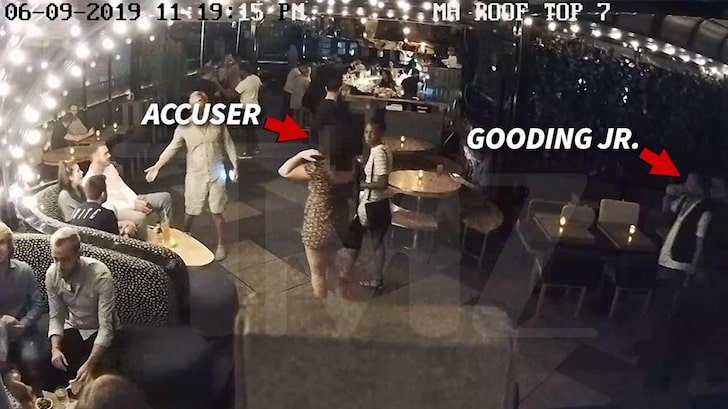 Cuba Gooding Jr.’s Girlfriend Flips Out On Him in Florida Bar