Megan Fox made the ultimate commitment to her monochrome look by dying her hair a platinum pink hue.

Fox opted for pink-on-pink-on-pink. Besides her newly dyed locks, she also wore a two-toned minidress with a keyhole cutout from designer Nensi Dojaka. The body of the clingy dress featured a blush shade, while the bust was a subtle magenta. For shoes, she wore strappy bubblegum pink heels. Even her glam and manicure matched the monochrome direction.

Meanwhile, the rapper put his own spin on the pink theme. With his own hair dyed an electric fuchsia, MGK wore a long-sleeved turtleneck that featured an abstract baby pink-and-blue swirly pattern. He styled the statement piece with ivory pants and accessorized with a silver-and-pearl chain.

Fox and MGK are known to coordinate their edgy looks, especially when making red-carpet appearances. In May, the duo again appeared in head-to-toe pink outfits, this time for the world premiere of their movie, Good Mourning. Fox dazzled in a sequined dusty pink gown that was custom-made by Philosophy di Lorenzo Serafini, while the musician wore an entirely hot pink suit that was printed all over with a red rose pattern.

In an interview earlier this year, Fox reflected on how her relationship with Kelly helped her embrace her own personal style.

“Prior to being famous everyone who knew me always knew that I would always wear one really insane piece, and everybody would be like, ‘You dress weird.’ And it wasn’t until I was molded and had to dress one way that I gave up on that,” she said. “And being with him, obviously, he’s slightly eccentric in the way that he dresses—and that has freed me up to express myself more. And he helped hook me up with Maeve Reilly, my stylist.” 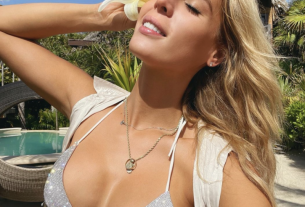