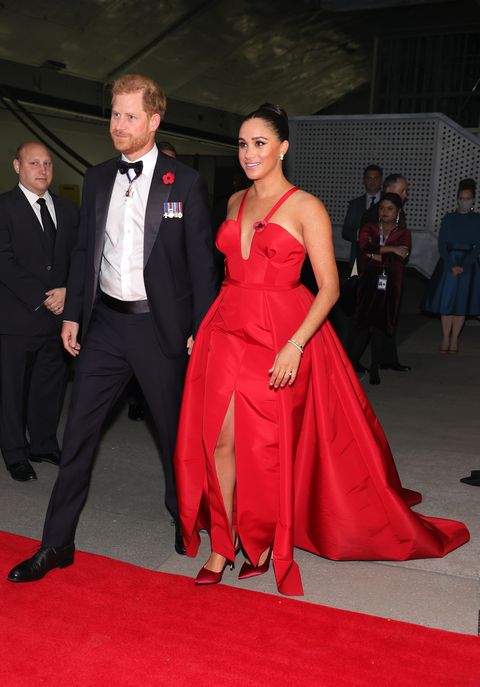 Red is Meghan Markle’s color. She’s shown us time and again that the fiery hue suits her well, whether with an elegant cape dress by Safiyaa for a royal red carpet, or a more casual and modern suit for a visit to NYC. Tonight, she nailed another crimson look: a plunging sleeveless gown by Carolina Herrera with a daring leg slit. Paired with matching slingback heels, a few bracelets, and an elegant updo, she was a total show-stopper.

The Duchess of Sussex stepped out in the bold look while attending the Salute to Freedom gala at New York’s Intrepid Museum with her husband, Prince Harry. The Duke of Sussex, who served in the British armed forces for 10 years, will be handing out medals at the event honoring members of the military. He looked sharp for the event in a classic black tux adorned with his own badges and a red poppy, a symbol honoring military members who’ve died in war, per People. Meghan wore a poppy on her dress as well.

Earlier this week, Meghan appeared at the New York Times‘ DealBook conference at New 42 Studios, where she discussed economic parity for women and the negative affect of tabloids. The duchess, who is vocal about the media’s scrutiny of her, said at one point of the conversation: “Well, first I would urge you not to read tabloids, because I don’t think that that’s healthy for anyone. Hopefully one day they come with a warning label like cigarettes do, like ‘this is toxic for your mental health.’”

She also discussed the necessity of paid family leave, and not just for women. She said “it takes strong men, modern men, to really understand they benefit from it as well.” 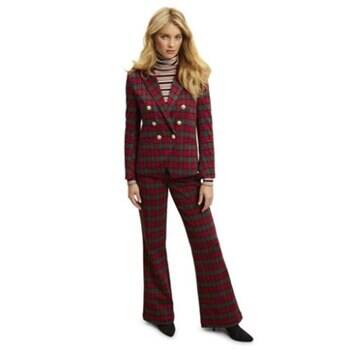