Snaps of an X-rated Beginning Boutique bikini have gone viral this week.

When pictures of a model wearing the garment swept the web, many were stunned that she managed to keep her intimate areas covered.

And one mum took it a step further by re-creating the skimpy look at home.

So would you be brave enough to try the trend?

A blogger, who posts using the username Knee Deep in Life, decided to try out the racy craze.

After being inundated with requests from her 253,000 followers, she created her own spin on the bikini.

The social media influencer stripped down to a tiny red thong and see-through crop top, before roping in her husband Steve to take some snaps.

She then placed her realistic photo next to the Beginning Boutique model’s, being sure to cover up her private parts with carefully placed emojis.

The mum shared the images online, alongside the caption: “Google Goals… Fanny Flossing.

“I can make that s*** work with a superman belt and a kids T-shirt.

“Ain’t no one got any business seeing the other side of that emoji.

MUM-BELIEVABLE: A blogger recreated the look on her Knee Deep in Life Facebook page (Pic: FACEBOOK/KNEE DEEP IN LIFE)

The amusing side-by-side snap has since racked up 11,000 comments and 3,500 shares on Facebook.

Hundreds of fans also took the time to leave a comment, with many remarking that the post is very relatable.

“Second picture – The reality of the average females badger roadkill of a vagina bursting out the sides of her panties.”

Another said: “So so funny. And not even embarrassing.

“You actually are so hilarious and write what the rest of us hard working mums are thinking.”

A third added: “Love this woman she is absolutely brilliant.

“She’s enough to put a smile on anyones face.” 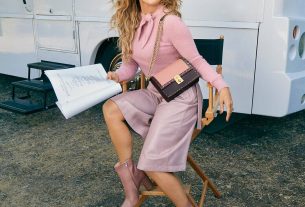 Meghan Markle Made This Specific Request for British Vogue’s Cover