When snaps of the one-piece emerged online, some remarked it was a “crime against humanity”.

So what do you make of the barmy garment?

The affordable price is likely because of the lack of material used to make the clothing item.

While the top looks fairly modest on top, its fit around the crotch is very uncomfortable looking.

The model avoided a wardrobe malfunction in promotional pictures – but this didn’t stop fashion fans from ridiculing the garment.

TOP OF THE SHOCKS: The top is modest when paired with jeans, but hides a cheeky surprise (Pic: BOOHOO)

A parent shared a picture of the bodysuit on Mumsnet, where it was mercilessly mocked.

“Am I being unreasonable to think this is the most bizarre item of clothing?

“It popped up as an ad on my Facebook.

“I understand the bodysuit trends but surely this would result in being split entirely in two, or the world’s worst front wedgie.”

XXX-TREME: Some described the garment as ‘vulval floss’ (Pic: BOOHOO)

Mumsnetters agreed that the one-piece wasn’t very practical, with one branding it as “vulval floss.”.

Another said: “A front thong? Dear God. How uncomfortable.”

Meanwhile, a third joked: “This takes camel toe to another level.”

Boohoo isn’t the only store to cause a stir online.

The retailer also baffled shoppers by releasing this bondage-inspired lingerie.

Ciara Gets Back to School Ready With “Amazing” Amazon Finds 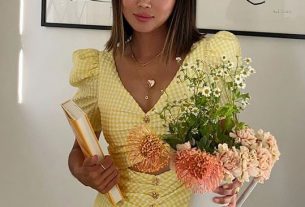 3 Summer Prints That Will Never Go Out of Style