The new series, You, which appeared on Netflix on December 26, has become one of the biggest growing shows in months.

Many fans binge-watched the series, while others are still trying to figure out who Joe Goldberg (Penn Badgley) is and how his ex girlfriend Candace (Ambyr Childers) is still relevant.

But for those who reached the final episode to find Beck (Elizabeth Lail) was killed by her lover and Candace had made a shocking comeback, they were left wondering what would happen next.

While Joe appeared shocked to see his former girlfriend alive, the producers revealed the surprise factor was an important part of the plot twist.

“We realised everyone would assume Candace was dead”

Talking to Cosmopolitan, co-creator Sera Gamble spilled on the decision to keep Candace alive, seeing as everyone believed she would be dead.

She said: “At some point in the season we realised everyone would assume Candace was dead and wouldn’t it be a great twist if she wasn’t?

“We had some stuff that we knew would happen in season two and her being alive spun out new ideas.”

She added: “Greg [Berlanti, the co-writer] pitched the idea that at the end Candace wasn’t quite as dead as we thought, and as soon as he said it, everyone in the writers’ room had so many ideas.

SHOCKER: Candace’s return was a shock for fans (Pic: YOUNETFLIX)

“I can tell you we will see more of her, and she shakes Joe to the very core with what she brings to the story, and so it propels Joe a lot in what he decides to do next.”

While the second part of Joe’s story will see him move from New York City to LA, it looks like his relationship with Candace is going to shake him up quite a bit.

In season one, fans learned Joe killed the man Candace was cheating on him with, by pushing him off a building.

We then find out that Candace disappeared, and never contacted anyone again nor posted on her social media sites, except for a site where she changed her name – though fans weren’t convinced it was real.

KILLED OFF: Joe killed Beck in the finale (Pic: YOUNETFLIX)

Learning all of the information convinced viewers that Candace was dead, though Joe never confirmed it.

Although he hallucinated her a number of times, when she walked into his bookstore, she was most definitely alive.

It’s debatable what role she will have as she returns for the new series, but fan theories are flying around already.

You is available to stream on Netflix now. 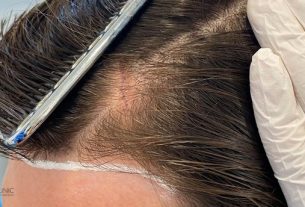