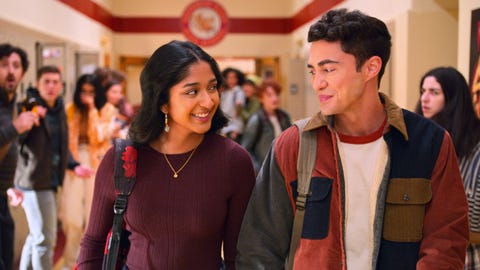 Spoilers for Never Have I Ever season 2 ahead.

Perhaps it would be best if Devi Vishwakumar (Maitreyi Ramakrishnan) had a little impulse control, but goodness, is it fun to watch the fallout from her choices! Never Have I Ever‘s second season, now streaming on Netflix, opens with the main character’s mother, Nalini, catching her daughter kissing Ben (Jaren Lewison), Devi’s rival-turned-crush. So it comes as a bit of a shock when Devi goes home and finds Paxton (Darren Barnet), her other crush, waiting for her. Paxton’s always been a bit wishy-washy about his feelings; could he possibly have changed his ways? Knowing that her family is moving to India soon, Devi decides she’ll play a little game with the boys before jumping ship. She’ll date them both, secretly and separately! By the time either of them finds out, she’ll be bound for another continent.

Her plan ends just about as well as you’d expect, especially when the trip to India is called off and Devi’s left with two betrayed boys and a guilty conscience. Yet by the time the school dance rolls around, the love triangle is once again thrumming at full speed: Ben has moved on to Aneesa (Megan Suri), Devi is jealous, and Paxton realizes how much Devi has done for him. The season ends with Devi and Paxton hand in hand—an official at last!—while Ben’s surprised by how badly he wants Devi back.

So what comes next for our favorite hothead and her troubled romances? Here’s everything we know so far about season 3.

Will there be a season 3 of Never Have I Ever?

Yes! Netflix announced that the quirky teenage dramedy has been renewed for a third chapter. Fans can expect to see more of Devi and her antics as she now must maneuver her teenage life as a Paxton’s girlfriend. “We are so grateful to Netflix and Universal Television for letting us continue to tell this story, and to the fans around the world who clamored to see more of this badly behaved Indian teenager,” co-creators Mindy Kaling and Lang Fisher said about the renewal.

When will season 3 be released?

Friday, August 12. There will be ten 30 minute episodes.

Will the original cast come back?

Of course, Maitreyi Ramakrishnan will reprise her role as Devi Vishwakumar. Lee Rodriguez and Ramona Young will undoubtedly return as Fabiola and Eleanor to encourage Devi’s wild shenanigans in season 3. As the love triangle continues, season three welcomes back Darren Barret as Paxton Hall-Yoshida, Devi’s “public” boyfriend, and Jaren Lewison as Ben Gross. Poorna Jagannathan will reprise her role as Dr. Nalini Vishwakumar, along with Richa Moorjani as Kamala. John McEnroe will also narrate the upcoming season. As for the new season two cast-mates (Megan Suri, Common, Utkarsh Ambudkar, and Tyler Alverez), fans will have to wait and see if their roles will appear in season three.

What will happen next?

After many ups and downs during season 2, Devi and Paxton are officially an item. After their grand entrance at the Winter Dance—and, uh, Paxton hitting Devi with his Jeep—Devi can check being a girlfriend off her “never have I ever” list. But season 3 would undoubtedly explore Ben’s uneasy feelings for both Devi and Aneesa, as well as how Devi navigates a public relationship with a boy who was once embarrassed to be seen with her.

Then, of course, there’s all the other characters and their brewing drama: Will Kamala (Richa Moorjani) ever be ready for marriage? Will Devi’s mother (Poorna Jagannathan) continue to date dermatologist Chris Jackson (Common)? And will Devi ever change her erratic ways? For the sake of good television, we can’t help but hope she stays wild.

As we patiently wait for an official season renewal announcement, Barnet revealed his own hopes for Devi and Paxton‘s new public relationship. “I would just love to see how it plays out with them being together as an exclusive couple. That’s going to bring on a whole new set of challenges, and I think there’s a lot more to explore,” Barnet said. “There’s a lot more for Devi to learn about Paxton, for Paxton to learn about himself, and for Devi to learn about herself. And when that all comes to fruition, who knows? They may fall in love or realize they’re better as friends or absolutely hate each other, so you never really know.”

In an interview with Entertainment Tonight, Ramakrishnan spoke on Devi and Paxton’s relationship potential in season 3: “It’ll be really cool to see Devi in a proper relationship because we technically never really have. It was a two-timing situation, and as Dr. Ryan and Eleanor say, that doesn’t count. That’s not real. She has zero boyfriends. So it is going to be cool to see her as a girlfriend—that new relationship in her life that she’s never had before.

She continued: “But I think Paxton realizing what Devi means to him is really nice because he realizes, ‘This is the person that believes in me and doesn’t think I’m stupid. And I actually accomplished something, and she was there for me.’ I think it’s Paxton setting aside the ego and the pride and also offering forgiveness and being like, ‘This is the situation.’ It’s really heartwarming.”

In terms of Devi’s new experience in dating, showrunner Lang Fisher told ET the show’s future would explore “sex and what do you do if you’re a nerd who’s done very little and you’re dating a much more experienced guy.”

Plus, Fisher promised we’ll see more of Devi’s family: “We introduced her grandmother [Nirmala] this season, who is this amazing actress [Ranjita Chakravarty], and she just brought this whole other dimension and kind of filled a little bit of the void that Mohan left. I’d like to see the new dynamics of her family now.” 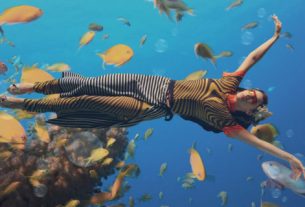