The Total Divas star has a lot to celebrate, especially after announcing that she’s pregnant! The reality TV personality is expecting her first child with fiancé Artem Chigvintsev, which comes only a few weeks after the happy couple announced they were engaged.

Nikki and the Dancing With the Stars pro were more than overjoyed to share the special baby news with everyone.

“Even though I feel really sick, like, can’t believe I’m going to be a mom soon,” Nikki tells People. “I’m going to have this person to take care of for the rest of their life and help them do the right things and just show them the way of the world. That’s amazing!”

Just one month ago, the former WWE star opened up about her future and touched on the topic of motherhood. “I definitely want to be a mom one day,” she expressed to Health magazine. “I’m in this unfortunate situation where I’m 36 and everyone is reminding me, ‘Your eggs, your eggs!’ So I’m freezing my eggs.”

“I just pray I have some fertile eggs left and that I can still be a mom,” she added. “So yes, I do feel like being a mom is in my future. I am just not sure how soon.”

Who would’ve known it was a lot sooner than she thought! Making this news even sweeter? Nikkie won’t experience her pregnancy journey alone.

Luckily, Total Bellas fans will get to the see the twin sisters learn about their pregnancy on the show, which is set to premiere this spring.

As fans of Nikki and Artem might recall, they first became friends during season 25 of Dancing With the Stars. The duo reconnected after Nikki and John Cena split in 2018. And by 2019, the two started taking their romance to the next level… and as they say, the rest is history.

To see the couple’s love story, scroll through our gallery above! From their first official red carpet appearance together to getting engaged, these two will having you swooning over their relationship.

Nikki shared a series of sweet PDA pics with a simple heart emoji.

The husband and wife to-be are seen for the first time since getting engaged as they grab a bite at Sweet Butter Kitchen in L.A.

“Excited for 2020 and the next decade with you @theartemc,” the Bella Twin wrote on Instagram. “I said yes in France in November! We have been trying to keep it a secret but really wanted to share our excitement for the New Year!”

“It has been such an incredible, fun, loving and tons of smiles year with you @theartemc,” the Total Bellas star expressed. “Excited for what 2020 will bring!”

“Last night was truly incredible…. I was honored to be able to attend Hospices de Beaune Chevalier’s gala dinner… and even more honored to be recognized. Burgundy will always have a place in my heart! And of course always satisfy my palette in an amazing way! Hospices de Beaune Wine Auction Weekend has been the best weekend so far! Still more to go! Thank you @domainesalbertbichot,” Nikki shared.

The coordinating couple looking stunning in their black tie formalwear.

“Goodbye kisses at one of my favorite places in Paris… @lemeuriceparis.”

“This was my look for my retirement party last week in Phoenix, AZ! @thebriebella and the @totalbellas crew put it together for me and it meant SO much! (@justinmaxx you’re a rockstar! Love you!) Bella Army your videos made me cry! Can’t wait for you all to see it on Total Bellas!,” Nikki posted.

Nikki and Artem share a smooch at a store opening in Scottsdale.

South of the Border

“Somewhere in Mexico with my Coco #vivamexico.”

“Finally got back my beautiful you have no idea how much I missed you,” Artem wrote. Too cute!

“Best Sunday with my [monkey].”

“Wow what a weekend starting with @thevfoundation that raised 7million for cancer research, spending the best time with friends and experiencing Napa to the fullest plus meeting incredible wine makers that shares love for wine and of course having @thenikkibella by my side made it the best weekend EVER,” Artem shared.

Nikki and Artem grab coffee and newspapers during a morning walk in L.A.

Nikki took to Instagram in August 2019 to share a message about her “new beginning” with Artem. “As I start a new amazing journey with @totalbellas and my life, my @theartemc is starting the same,” the retired WWE star wrote. “And I am so excited for him to be on this journey with me. I’m thankful for him to showcase his life, love, ups and downs not only for me but for my Bella Army and my Total Bellas viewers.”

The duo can’t keep their hands off each other while shopping with Brie in L.A.

The newly labeled boyfriend and girlfriend step out in July 2019.

Nikki and Artem pose in plaid before Billie Eilish’s July 11 concert in L.A.

Nikki’s neon pants are almost as vibrant as her ear-to-ear smile!

“Happy 4th of July!” Nikki captioned the last of several adorable IG photos from her and Artem’s holiday.

Artem sweeps Nikki off her feet! “Lake Tahoe makes my soul smile & my inner child come out and play!” she wrote on Instagram.

Nikki and Artem’s Lake Tahoe photo shoot was hotter than the weather on 4th of July.

Nikki and Artem swap smooches while grabbing a bite at coffee hot spot Intelligentsia in L.A.

Loved Up at Lunch

The cuties can’t hide their love for each other while grabbing a meal at Joan’s on Third in L.A.

“Happy Birthday to a man who not only makes my face smile, but my heart. You’re a special one Mr. Chigvintsev! Your relaxing, calm, patient, kind, happy energy and aura is contagious! You truly are the kindest soul I have ever met. Thank you for bringing a lot of sunshine into my life. Happy Birthday my Artem!” Nikki wished her beau in June 2019.

Artem and Nikki enjoy a weekend getaway to the BottleRock music festival in Napa, California.

“In honor of my Khaleesi, forever my Queen of Dragons. And love BottleRock with my A. (nickname by the Bird),” Nikki wrote.

Artem made his first appearance on the Bellas’ podcast in May 2019 and the lovebirds didn’t shy away from talking about their relationship.

Nikki and Artem cuddle up while in Disney with Brie and Bryan.

Nikki kisses Artem’s shoulder as they grab lunch together in Studio City, Calif. in May 2019.

The WWE beauty celebrated Cinco de Mayo early with a romantic trip with her man.

The two are muy caliete!

Nikki and Artem cuddle in bed with her pup Winston.

Breakfast With the Fam

Brie posted this cute pic of her, Birdie, Nikki and Artem grabbing breakfast together in NYC in April 2019.

Artem and Nikki hold hands during a daytime date in Washington, D.C.

After confirming their relationship, Nikki and Artem enjoy a sunny morning stroll around L.A.

Trailing Total Bellas‘ fourth season finale, the WWE star took to Instagram Sunday night, March 24, with an adorable snapshot that sees her planting a sweet kiss on the DWTS pro’s cheek—and looking about as smitten as he does. The photo seemed to reemphasize what the final moments of Sunday’s episode already confirmed: that Nikki and Artem are, in fact, doing the romance thing. “Well after that season finale,” she wrote in the post’s caption, adding that her and Artem’s relationship is the “first thing I’ll be talking about” during Wednesday’s upcoming episode of The Bellas Podcast. Stay tuned!

Artem followed Nikki’s adorable Instagram post with one of his own the following the day. The scenic shot pictures a giddy-looking Nikki smiling and covering Artem’s face while his arm is wrapped sweetly around her waist.

Just weeks before the pair would go on to publicly confirm their romance, Artem made several appearances on Nikki’s Instagram Story and Instagram Live videos before and during Total Bellas‘ March 10 episode. Why? The Bella twin explained that Artem would be joining her in live tweeting the episode, though that wasn’t the only reason for his social media cameo. “I have a special guest who had a really fun Sunday fun day with me,” she told fans in the Live video, before explaining they spent the afternoon enjoying ramen and non-alcoholic beer together. 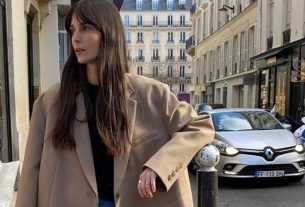 What are PENIS FACIALS? Women are using Korean babies' FORESKINS to look younger