In case you were wondering, Odell Beckham Jr. is STILL dancing … and this time he’s using the art of movement to send a message to all of his haters to LEAVE HIM THE HELL ALONE.

Beckham has been going through it lately … there’s a multi-million dollar lawsuit that’s been filed against him, a video that ALLEGEDLY shows him doing some bad stuff, plus all those pesky NY Giants trade rumors.

OBJ’s seemingly addressing the controversy with the dance … popping up on NFL player Shane Wynn‘s IG story dancing to one of hottest songs in hip-hop — Flipp Dinero‘s “Leave Me Alone.”

As always, his moves are A1, and the song is a banger … but will anyone listen?

R. Kelly's 'Too Late' Speech to Friends Was No Diss to Accusers 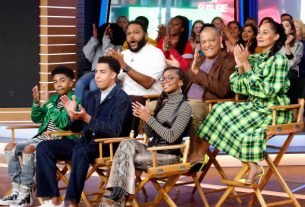 People On Twitter Credit ABC’s “Black-ish” For Teaching Them About Juneteenth!